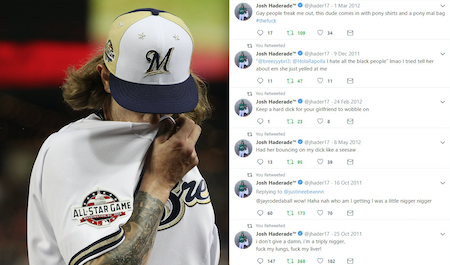 Last week the Washington Post reported on Major League Baseball’s embarrassment and backtracking over its political contributions to Congressman Jason Lewis (R). According to the Post, Lewis had lamented the fact white Americans are not reproducing at the same rate as Latinos. He suggested abolishing slavery was an overreach by the federal government. He said female voters who care about abortion and same-sex marriage are “nonthinking.” The Congressman has a long history of racist and misogynistic remarks.

These dangers will heighten as the 2020 Presidential contest commences. CPA will continue to warn companies of these risks while helping companies implement policies to mitigate such risks. To help companies and shareholders avoid such embarrassment, and to help ensure political contributions advance the interests of shareholders, my wife and I plan to file Transparent Political Spending Proposals at the following companies for the coming proxy season (subject to change):

Major League Baseball is “already is dealing with criticism over a $5,000 donation the league made earlier this month to Mississippi Sen. Cindy Hyde-Smith, as news circulated about an inflammatory joke the Republican had made invoking her state’s history of public hangings.”

In a statement Wednesday to The Washington Post, MLB spokesman Pat Courtney said the league was suspending its political contributions “as we work on improving our internal process to put more rigorous vetting procedures in place.” …

Elected in 2016 to represent Minnesota’s 2nd congressional district in suburban Minneapolis and St. Paul, Lewis served two years and lost a bid for reelection earlier this month. His previous career in talk radio — as host of the Minneapolis-area The Jason Lewis Show, and as an occasional guest host for Rush Limbaugh — was no mystery when MLB lobbyists decided to attend his fundraiser in 2017. The Atlantic, in August 2016, detailed some of Lewis’s more provocative statements in a story titled, “Meet Minnesota’s Mini-Trump: Republicans are rallying behind Jason Lewis, a radio provocateur famous for racist and misogynistic rants who’s running for Congress.”

Lewis, 63, again became the focus of controversy earlier this year when CNN unearthed more recordings of his old radio shows in which, among other things, he termed people on welfare and other forms of public assistance as “scoundrels” and “parasites.”

His excuse was classic. I wonder if Nazi’s thought of this excuse.

“I was paid to be provocative,” Lewis said in July. “There’s a difference between a politician and a pundit. That’s why going back six years, eight years, 10 years, 15 years misses the point.” …

Among America’s major professional sports leagues, only the NFL maintains a similar level of financial support for members of Congress and those vying for office. The NBA and NHL occasionally pay lobbyists to represent their interests in D.C., records show, but do not operate political action committees that regularly donate to specific candidates and causes.

Earlier this year, MLB’s lobbying efforts appeared to pay off. As part of an approximately 2,000-page, $1.3 billion spending bill, Congress added a two-paragraph section that bolstered MLB’s legal fight against minor league players who have sued for higher wages.