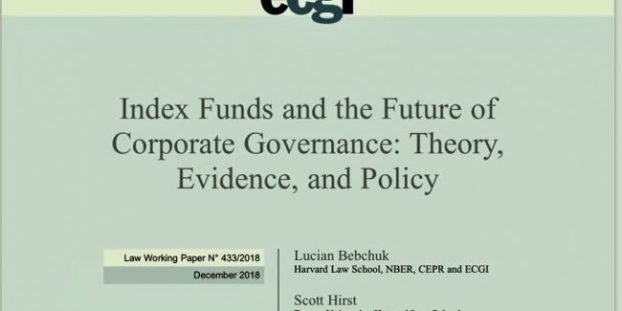 Lucian Bebchuk has given more thought to the issues surrounding the Big Three Index Funds than other researchers. He and Scott Hirst recently provide a “comprehensive theoretical, empirical, and policy analysis of index fund stewardship.” Reference also Strine: Big 4 Responsible to “Forced Capitalists,” as well as The Untenable Case for Keeping Investors in the Dark by Bebchuk, et al. as we examine further strategies to make large investors work more effectively for those who use their services.

Index funds managers have strong incentives to under-invest in stewardship and defer excessively to corporate managers. Evidence supports theory on the following:

Bebchuk and Hirst would rely primarily on government defined prescriptive behavior, rather than facilitating competitive market forces. While I support the goals of Strine and Bebchuk, timely implementation of their suggested reforms is unlikely. The SEC will not force big funds to vote in favor of shareholder proposals requiring a vote of shareholders before making political contributions or a mandate that corporations disclose such contributions, not while Donald Trump is President. Most of Bebchuk’s recommendations would likely be opposed by Big Funds, as well as corporate interests. Safe harbor provisions are more of a possibility but big funds have expressed no interest in such provisions, as far as I know.

When Leo Strine raises the issue of “forced capitalists,” he too acknowledges the powerlessness of investors to influence. His idea of requiring a super-majority vote to make political contributions address only one issue of many, although a very important one if democracy is to be safeguarded.

The National Association of Manufacturers, through their folksy sounding “Main Street Investor’s Coalition,” has also expressed concern over the helplessness of index investors to influence proxy voting. One of their solutions is the following: We will require that retail investors who own passive funds through 401(k)s, index funds and other vehicles have a say in how their shares are voted.

The Coalition may want retail investors to have more say because those investors typically have no access to data, reports and expertise used by institutional investor. Most actual retail shareholders do not vote. If they do, they vote as boards recommend. The Coalition is right, 401(k) plan contributors have no real voice. Additionally, most have little or no idea how their investments are voted or why. What exactly would “more say” look like?

John Wilcox of Morrow Sodali, a global consultancy and service provider with expertise in corporate governance, has an idea for more say. In his December 28, 2018 letter to the SEC regarding their Roundtable on the Proxy Process, he writes,

The concept of “pass-through voting” on matters relating to issuers has long been dismissed as impractical. It is not legally mandated because voting decisions for the silent majority are delegated to the fiduciaries who make investment decisions on their behalf. However, this hands-off approach is beginning to be questioned. In recent years stewardship codes have amplified the fiduciary standards that asset managers must meet in their oversight of portfolio companies, their governance policies and their proxy voting decisions. Even though there is currently no mandate for gathering feedback from the silent majority, the growing responsibilities of institutional investors and the availability of new technology are beginning to open the door to pass-through communications…

A case can be made that investors who delegate stock picking and proxy voting decisions to third-party professionals, while having no standing to vote at shareholder meetings, should have some means to voluntarily inform their fiduciaries about their views on issues affecting their investments. Indeed, both academics and regulators have recently raised questions about: (i) concentration and common ownership of stocks by index funds; and (ii) the exercise of voting power by ETFs without reference to the views of ultimate owners in managed accounts. These concerns combined with the growing popularity of collective investment vehicles will sooner or later give rise to private sector mechanisms for informal pass-through referendums on ETF’s and indexers’ voting policies. Pressure for such feedback mechanisms will surely increase as environmental and social concerns, shareholder activism and risk oversight feature more prominently in public discussions about corporate purpose and boardroom accountability.

For those ideas to work, investors should know how fiduciaries already vote on their behalf. Real-time proxy voting disclosure would provide stronger incentives for fund managers to vote proxies conscientiously. Real-time would probably be less expensive than submitting unsortable N-PX files because funds could open window to their voting platform, which already exists.

With real-time disclosure, proxy votes would get more attention from the press. Retail investors could benefit from the research and rationale behind announced votes and could provide better feedback to their funds. That feedback could inform not just proxy voting but marketing as well.

Indexes are starting to differentiate on sectors and a few even on activism. Witness State Street’s Fearless Girl campaign and then voting against 400 directors in 2017 for lack of diversity.  I will write more on these developments next week.