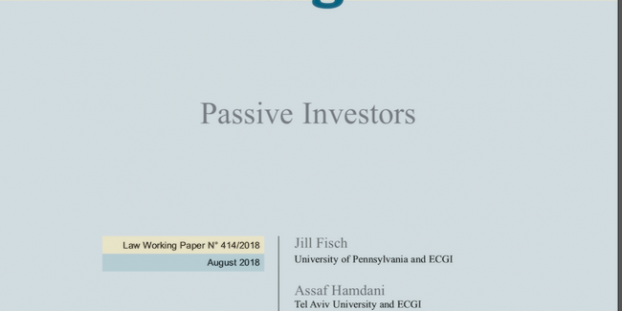 Our key insight is that although index funds are locked into their investments, their investors are not. Like all mutual fund shareholders, investors in index funds can exit at any time by selling their shares and receiving the net asset value of their ownership interest. This exit option causes mutual funds – active and passive – to compete for investors both on price and performance. While the conventional view focuses on the competition between passive funds tracking the same index, our analysis suggests that passive funds also compete against active funds. Passive fund sponsors therefore have an incentive to take measures to neutralize the comparative advantage enjoyed by active funds, that is, their ability to use their investment discretion to generate alpha. Because they cannot compete by exiting underperforming companies, passive investors must compete by using “voice” to prevent asset outflow.

In the case of Strine’s concerns with political contributions, use of “voice” would be voting in favor of measures requiring shareholder approval or at least transparency of political contributions. While Strine’s paper was based on actual behavior, Fisch points to potential, if funds operate logically. The potential for “voice” to ensure competitiveness with active investors also addresses, at least in part, some of Bebchuk’s concerns.

Fisch also points out in another paper (Shareholder Collaboration) that passive investors are increasingly engaged in information production of their own, not “just as ‘reticent’ supporters of initiatives undertaken by activist hedge funds.” Because of their size, huge passive index funds often cast deciding votes. Because of their market-wide focus, they often have information the firm insiders do not have. In many cases the potential rewards for index funds can be disproportionately high, compared to their investment in time, since they typically hold a significant portion of the outstanding stock at most large firms.

Fiduciary obligations are complicated.  “Mutual funds’ fiduciary duties require them to vote in a manner that benefits their investors, not each company that they hold in their portfolio.” (Passive Investors) For example, holding both target and bidder might lead to a different vote than holding only one.

Most troubling was the following:

Delaware law provides shareholders with the right to vote their shares as they see fit and does not impose any obligation on shareholders to vote unselfishly or to further the economic interests of the corporation. [See, e.g., Ringling Bros.-Barnum & Bailey Combined Shows, Inc. v. Ringling, 53 A.2d 441, 447 (Del. 1947) (“Generally speaking, a shareholder may exercise wide liberality of judgment in the matter of voting, and it is not objectionable that his motives may be for personal profit, or determined by whims or caprice, so long as he violates no duty owed his fellow shareholders.”).]

Given that funds operate within such a weak standard, it is important that individuals, the real Main Street investors in index funds, have ready access to voting records in an easily compared format. Keith L. Johnson, et al., point out the importance of fiduciaries conducting “congruity analyses of proxy votes” with public statements statements by delegated fund managers.

As an example of how such potential inconsistencies might present, BlackRock states in its Investment Stewardship 2018 Annual Report, “During our direct engagements with companies, we address the issues covered by any shareholder proposals that we believe to be material to the long-term value of that company. Where management demonstrates a willingness to address the material issues raised, and we believe progress is being made, we will generally support the company and vote against the shareholder proposal.” (Emphasis added.)

On the surface, this stated practice of voting against shareholder resolutions that have been determined to be in the best interests of the company suggests there is a preference for supporting management over the interests of clients in improving company performance as soon as practical. The resulting disconnect between value creation and proxy voting sends mixed signals to clients, the company and the marketplace. It could have the practical effect of giving companies more room to ignore or delay value enhancing actions.

Fisch argues that index fund investors can switch and some can. However, many employer sponsored 401(k) and other plans provide few choices. Main Street investors are often, as Strine notes, “forced capitalists.” If their 401(k) plan administrators take little or no initiative to investigate potential conflicts or breaches of fiduciary duty, how would they know? Like index funds themselves, the only tool “forced capitalists” might have is “voice.” However, like index funds, they need information before they can voice concerns.

Under the current system, proxy votes only need to be disclosed once a year and can be in a format that makes sorting and analysis difficult. More frequent, transparent and user friendly proxy voting records would make it easier for employees to argue for investment options better aligned with value creation. Such information would also make it more difficult for employers to ignore their fiduciary duties.

Real-time, or close to real-time, proxy voting disclosures using an internet window into each fund’s existing proxy voting platform would facilitate the ability of Main Street investors, the beneficial owners, to hold companies accountable through the complex chain of ownership. Several public pension and “socially responsibe” mutual funds have made such disclosures for many years. (See an incomplete list in our Shareowner Action Handbook.)

I will address more of the rationale and benefits of “real-time” disclosure in an upcoming post. Check back or subscribe to email notifications.