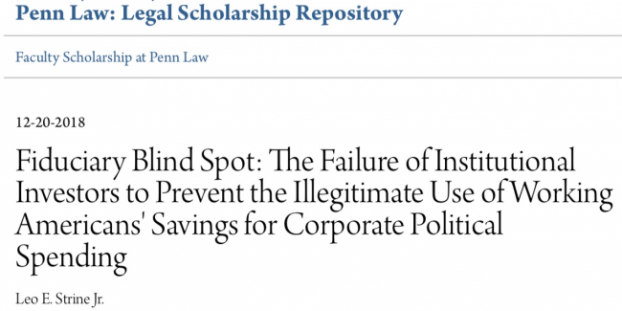 According to Strine, “Although the Big 4 never use their clout to affirmatively make proposals… they could put a system-wide break on excessive and illegitimate corporate political spending.” His recommendations hinge on the Big 4 (BlackRock, Vanguard, State Street, and Fidelity) voting in favor of shareholder proposals on political contributions.

BlackRock, Vanguard, and State Street alone “constitute the single largest shareholder of at least 40% of all public companies in the U.S.” and in nearly 90% of the S&P500. Strine cites a study that found three-fourths of survey respondents—including 66% of Republicans and 85% of Democrats—back a constitutional amendment outlawing Citizens United v. FEC. That is the Supreme Court decision that held restricting independent expenditures for communications by corporations unconstitutional.

Strine also notes, “in Citizens United v. FEC, Justice Kennedy, writing for the majority, implicitly assumed that access to information about corporate political spending would be accessible and allow stockholders to correct abuses ‘though the procedures of corporate democracy.'”

With the advent of the Internet… Shareholders can determine whether their corporation’s political speech advances the corporation’s interest in making profits, and citizens can see whether elected officials are ‘in the pocket’ of so-called moneyed interests… [Disclosure] permits citizens and shareholders to react to the speech of corporate entities in a proper way. This transparency enables the electorate to make informed decisions and give proper weight to different speakers and messages.

Kennedy expressed enthusiasm that technology today makes disclosure “rapid and informative.” Of course, if spending is not disclosed, the “procedures of corporate democracy” cannot work. Shareholders must file political transparency proposals at each company and are dependent on support from the Big 4 to win. However, the Big 4 remains on the sidelines.

BlackRock’s investment policy, for example, defers to management on political issues. “[I]t is not the role of shareholders to suggest or approve corporate political activities.” BlackRock “generally do[es] not support proposals requesting a shareholder vote on political activities or expenditures.” In 2018, Vanguard and Fidelity supported no political spending disclosure proposals. BlackRock supported 4.1%. State Street supported 39%. A study of 25 proposals found only one such proposal passed but over half would have passed if the largest investors, such as the Big 4, voted in favor.

I filed several proposals at companies requesting only that boards disclose their political contributions. None passed. Strine’s arguments make me look like a conservative. He writes that workers are “forced capitalists” who cannot hold the funds that invest their money accountable.

Worker Investors do not control the underlying investments, they do not vote at the underlying portfolio companies. That voting is left to the Big 4. Plus, the reality is that there is no comparable stockholder litigation, proxy fights, or other activism in the mutual fund space. An accountability framework of that kind just does not exist.

And exit is illusory; their capital is trapped. Because Worker Investors cannot take out their money without Castro-like expropriation until age 59 and a half, they have to give this money over to the institutional investor industry for generations.

Their “forced” investments should not be used for political purposes. Strine goes further than seeking transparency:

[I]f the Big 4 open their fiduciary eyes and follow the recommendation of industry icon Jack Bogle, and vote to require that any political spending from corporate treasury funds be subject to approval of a supermajority of stockholders, they alone could cure the double legitimacy problem of corporate political spending. (my emphasis)

Strine’s push for Big 4 funds to bar political spending without the vote of a super-majority of shareholders is unlikely to succeed. When did the world flip? How did Leo E. Strine Jr. become more radical than James McRitchie? Is Strine’s an exaggerated stance for bargaining? Is this his equivalent of President Trump’s trade war on China to address intellectual property issues?

Is Strine just hoping to get funds to vote in favor of less ambitious proposals like my own? Does he really believe companies should only make political contributions approved by a supermajority of shareholders? He hints that corporations should not make any political contributions. Chief Justice Strine, I hope you are reading and will respond in the comment section below or by email. I also welcome speculation by others.

The Big 4 (and all funds) should vote in favor of proposals asking corporations to report their political contributions. However, I doubt even Strine’s persuasive powers will sway the Big 4. An SEC petition from Lucian Bebchuk, Robert J. Jackson, Jr. and other academics to require disclosure of political contributions got more favorable comments than any other petition in SEC history. Anyone care to update my last post on the subject? An SEC with a majority of Commissioners appointed by President Trump, who would not disclose his tax returns, is unlikely to require transparency of corporate political contributions.

The vast majority of Americans want Citizens United overturned. They want their funds to vote in favor of transparency. Currently, large funds must report how they voted SEC on form N-PX. However, they are required to do so once a year. They are not required to do so in a searchable format. Reporting is not “rapid and informative,” as assumed by Justice Kennedy when writing Citizens United. Compare CalSTRS’ sortable disclosure with that of State Street Institutional Investment Trust.

I am delighted with Strine’s paper (some of my quotes may be from an earlier draft on SSRN). Strine adds many good arguments to those already made. Public and investor pressure on the Big 4 could persuade them to vote in favor of transparency. “Forced capitalists,” in Strine’s words, should first demand that disclosure of mutual fund voting records be “rapid and informative,” as alluded to by Justice Kennedy. That requires real-time reporting.

Strine refers to “forced capitalists” as “Worker Investors.” SEC Chairman Clayton uses the terms “Mr. and Ms. 401(k)” and “Main Street Investors.” Change happens when thousands of us, whatever we are called, take action. It may even take millions. Real-time proxy voting disclosure would provide stronger incentives to fund managers to vote proxies conscientiously. It would likely be less expensive than submitting unsortable N-PX files. Since most large funds record their vote on an electronic database platform, they could make a portion of what already exists available to the public.

With real-time disclosure, proxy votes would get more attention by the press. Retail investors could benefit from the research and rationale behind announced votes. Currently, up to 90% of retail investors fail to vote, depending on delivery mode. With real-time disclosure, the Big 4 and other funds would begin to compete not only on the basis of cost and returns but also on proxy voting and how that aligns with the values of “forced capitalists.”

I will write more about transparency as a transformational change in coming posts. Stay tuned.

This just in from Bruce Freed and Dan Carroll from Mutual Fund Voting on Corporate Political Disclosure.