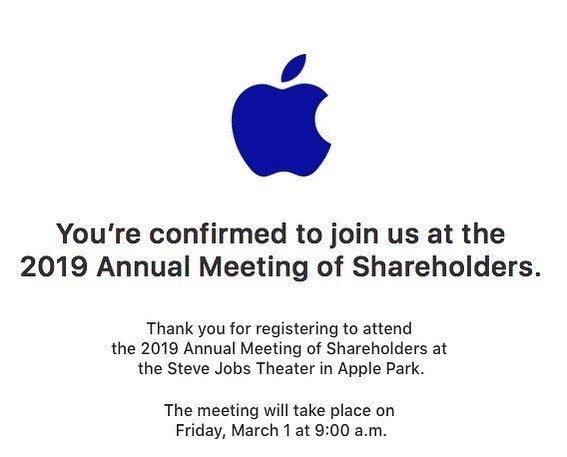 The Apple 2019 annual meeting is March 1st. To enhance long-term shareholder value, vote AGAINST directors Levinson and Gore., as well as pay and the auditor. Vote FOR shareholder proposal #4 Proxy Access Amendments and against #5, which aims to set up an ideological litmus test for directors. [yasr_visitor_votes size=”small”][yasr_overall_rating size=”small”]

Apple, Inc. (AAPL) designs, manufactures, and markets mobile communication and media devices, and personal computers. It also sells various related software, services, accessories, and third-party digital content and applications. Most shareholders do not vote.  Reading through 70+ pages of the proxy takes too much time. Your vote will make only a small difference but could be crucial. Below, how I voted and why.

I voted with the Board’s recommendations 58% of the time. View Proxy Statement via SEC’s EDGAR system (look for DEF 14A).

From the Yahoo Finance profile: Apple Inc.’s ISS Governance QualityScore as of January 1, 2019 is 1. The pillar scores are Audit: 1; Board: 2; Shareholder Rights: 1; Compensation: 5.
Corporate governance scores courtesy of Institutional Shareholder Services (ISS). Scores indicate decile rank relative to index or region. A decile score of 1 indicates lower governance risk, while a 10 indicates higher governance risk. We need to pay close attention to the Compensation but we also need to look closely at Shareholder Rights regarding proxy access.

Egan-Jones Proxy Services recommends FOR, WITH EXCEPTION OF Art Levinson and Al Gore: Egan-Jones’ Proxy Guidelines recommends against directors 10 years or more years of tenure, since they are considered affiliated, with the exception of diverse nominees.  Additionally, they also recommend against Levinson because the Chairman of the Board should be held accountable in cases when the Company obtains the score of Needs Attention on the Cyber Security Risk Rating. I have gradually come to the same conclusions.

Vote AGAINST Levinson and Gore.

I have no reason to believe the auditor engaged in poor accounting practices or has a conflict of interest. Egan-Jones recommends voting against the auditor if they served for seven years. Independence becomes compromised by that time. Agreed. Ernst & Young has served more than seven years. No other issues appear significant.

Apple’s Summary Compensation Table shows the highest paid named executive officer (NEO) was SVP, General Counsel, and Secretary Kate Adams at $26.7M. I’m using Yahoo! Finance to determine market cap ($732.8B) and I define large-cap as $10B, mid-cap as $2-10B, and small-cap as less than $2B. Apple is a large-cap company.

Egan-Jones Proxy Services recommends a vote for the say-on-pay item.

This is my proposal (James McRitchie). Apple proposal 4, would raise the number of “Shareholder Nominees” eligible to appear in Apple’s proxy materials from 20% to 20% of the directors then serving or 2, whichever is greater. Apple currently has 8 directors; 20% of 8 rounded down is 1. A single shareholder nominated and elected director could be easily isolated and ineffective, unable to get a second on a motion to discuss important topics.

According to The Latest on Proxy Access, from Sidley, “proxy access is now mainstream at S&P 500 companies (71%) and is nearly a majority practice among Russell 1000 companies (48%).”

In its request to the SEC, our Company alleged the Proposal’s Supporting Statement “falsely describes the Company as a ‘distinct outlier’ and a ‘laggard’ in regards to its access bylaw. These statements are objectively and demonstrably false and misleading…” The SEC flatly rejected Apple’s request: “We are unable to conclude that you have demonstrated objectively that the Proposal is materially false and misleading.”

According to the report from Sidley: The majority of proxy access provisions adopted since the beginning of 2015 – including 84% of the proxy access bylaws adopted in 2018 – have the following terms:

A significant majority of companies limit the number of board seats available to proxy access nominees to the greater of 2 or 20% of the board (438 out of 565 companies (78%). This has become standard in recent years.

Sidley’s 2018 report, cited in the Proposal, provided an overview of provisions adopted by 475 companies in 2015, 2016, and 2017, including the most restrictive nominee limit, 77 instances (16% of the total) where, like Apple, provisions limit nominees to 20% of directors.

However, most of the 77 companies listed have 10 or more directors, so the 20% limit would yield at least two proxy access nominees. Only 22 (29%) of the 77 companies fell into the same category as Apple, with proxy access candidates limited to 1 based on current board size. Examples include Arch Coal, Cabot Oil & Gas, and EOG Resources. Apple falls into the bottom 4.6% (22/475 companies).

Note: The 2019 Sidley report found the number of companies in this category shrank from the 77 previously reported to 62 of 565 companies. Our analysis was based on the larger number of 77 because the latest Sidley report does not provide a company by company list of provisions. If the proportion of boards with the 20% provision and less than ten directors holds year over year, Apple is even more of a laggard (29% x 62/565 = 3%).

Egan-Jones also recommends a vote FOR.

The proposal comes from the National Center for Public Policy Research. At first their proposals were fairly straightforward about their conservative agenda. More recently, they file proposals that seem good on the surface, so you have to read carefully. This proposal says, “true diversity comes from diversity of thought.” Agreed. However, it along with what is becoming a standard skills matrix for directors, the proposal wants Apple to disclose each nominees “ideological perspectives.” That is not a direction I want to go. What’s next, a loyalty oath?

Proxy Insight reported on Australia’s Local Government Superannuation Scheme. They voted for all items except proposal #5, Trillium voted against all items except they voted for the auditor and for #4 proxy access amendments. Domini voted against #5 and for all the rest but Bob Iger and executive pay. In looking up a few funds on our Shareowner Action Handbook, Praxis and Calvert voted like Australia’s Local Government Superannuation Scheme.

Matters for inclusion in the proxy materials for the 2020 annual meeting of shareholders, other than nominations of directors, must be received on or before September 10, 2019. All proposals must comply with Rule 14a-8 under the Exchange Act.

Proposals and director nominations must be sent either by mail to Apple’s Secretary at One Apple Park Way, MS: 169-5GC,Cupertino, California 95014, or by email to shareholderproposal@apple.com.