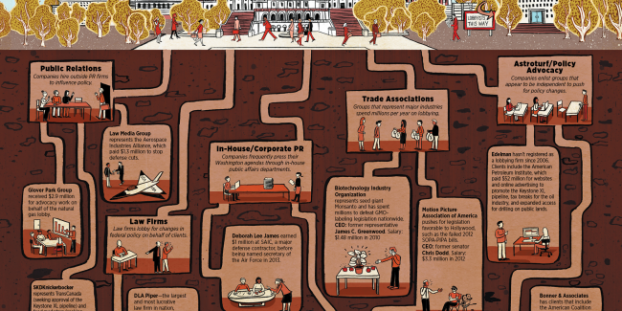 Corporate lobbying disclosure remains a pressing shareholder proposal topic for 2019. A coalition of at least 70 investors have filed proposals at 33 companies asking for disclosure reports that include federal and state lobbying payments, payments to trade associations and social welfare groups used for lobbying and payments to any tax-exempt organization that writes and endorses model legislation. This year’s campaign highlights the theme of corporate political responsibility, with a focus on climate change lobbying.

Corporate lobbying affects all aspects of the economy, including issues ranging from climate change and drug prices to financial regulation, immigration and workers’ rights. Lobbying can provide decision-makers with valuable insights and data, but it can also lead to undue influence, unfair competition and regulatory capture. In addition, lobbying may channel companies’ funds and influence into highly controversial topics with the potential to cause reputational harm.

To address potential reputational and financial risk associated with lobbying, investors are encouraging companies to disclose all their lobbying payments as well as board oversight processes. We believe that this risk is particularly acute when a company’s lobbying, done directly or through a third party, contradicts its publicly stated positions and core values. Disclosure allows shareholders to verify whether a company’s lobbying aligns with its expressed values and corporate goals.

A major focus for the investor coalition continues to be undisclosed trade association lobbying payments because they are not required to disclose their funding sources. In some cases, a trade association may actively lobby for issues that are contrary to a company’s public statements and values or take a controversial public stand. If this is the case, investors urge the company to publicly clarify any differences between its position and that of the trade association.

Whether a company’s lobbying aligns with its values and goals captures the emerging concept of corporate political responsibility. Many corporations positively portray their climate policies and sustainability goals while their lobbying through trade associations can tell another story. For example, General Motors declares its commitment to reduce greenhouse gas emissions yet its trade association, the Alliance of Automobile Manufacturers, has lobbied to weaken fuel standards. Corporate political responsibility requires companies that embrace sustainability to be transparent about their political activity.

Regarding climate policy, there are many cases of lobbying misalignment. Companies with programs addressing climate change are also funding the Chamber of Commerce, which has lobbied consistently against effective climate change regulations. Drug pricing, net neutrality, sick leave, shareholder rights and tobacco are other areas where lobbying misalignment takes place. A drug company may support access to affordable medicines while belonging to and funding the Pharmaceutical Research and Manufacturers of America, which spends millions lobbying against affordable drug price initiatives. A telecom company that claims support for an open internet may belong to US Telecom, which is actively fighting net neutrality. Many companies belong to the Business Roundtable and National Association of Manufacturers, which lobby against the right to file shareholder proposals.

The proposals for 2019 focus on companies that lobby significantly at the federal and state levels, do not disclose their trade association lobbying payments, or are members of the American Legislative Exchange Council (ALEC), which has a record of opposing climate change policies and regulation.

Since 2011, this coalition that is comprised of religious investors, members of the Interfaith Center for Corporate Responsibility, foundations, public and labor pension funds, asset managers and individual investors has filed nearly 400 shareholder proposals. The campaign has led to more than 75 agreements to provide greater lobbying disclosure. Additionally, coalition members have engaged more than 80 companies that have left ALEC, including notable 2018 departing companies AT&T, ExxonMobil, Honeywell and Verizon. Investors have also written and held conversations with numerous companies on lobbying issues without filing resolutions. This initiative is coordinated and supported by AFSCME and Walden Asset Management, a division of Boston Trust & Investment Management Company.

Constructive dialogues with a number of companies led to agreements to expand their disclosure re. lobbying oversight and expenditures and the resolution was therefore withdrawn. The companies with such agreements include AT&T, Bank of America, Emerson, IBM, and JPMorgan Chase. Thus this resolution will not appear on the proxy of these companies.

Whereas, we believe in full disclosure of ExxonMobil’s direct and indirect lobbying activities and expenditures to assess whether ExxonMobil’s lobbying is consistent with its expressed goals and in the best interests of shareholders.

Resolved,the shareholders of ExxonMobil request the preparation of a report, updated annually, disclosing:

The report shall be presented to the Audit Committee or other relevant oversight committees and posted on ExxonMobil’s website.

We encourage transparency in ExxonMobil’s use of funds to lobby. ExxonMobil spent $99.43 million from 2010 – 2017 on federal lobbying. These figures do not include state lobbying expenditures, where ExxonMobil also lobbies but disclosure is uneven or absent. For example, ExxonMobil spent $3,860,715 on lobbying in California from 2010 – 2017. Exxon also lobbies abroad, reportedly spending between €3.75m and €4m on lobbying in Brussels for 2017 (“Revealed: ExxonMobil’s Private Dinner with Cyprus’ Top EU Brass,” EU Observer, August 12, 2018).

We commend ExxonMobil for ending its membership in the American Legislative Exchange Council (“Exxon Mobil Joins Exodus of Firms from Lobbying Group ALEC,” Reuters, July 12, 2018). However, serious disclosure concerns remain. ExxonMobil belongs to the American Petroleum Institute, Business Roundtable (BRT), Chamber of Commerce and National Association of Manufacturers (NAM), which altogether spent $260,410,014 on lobbying for 2016 and 2017. Both the BRT and NAM are lobbying against shareholder rights to file resolutions. ExxonMobil does not disclose its memberships in, or payments to, trade associations, or the amounts used for lobbying.

We are concerned that ExxonMobil’slack of lobbying disclosure presents reputational risks when its lobbying contradicts company public positions. For example, ExxonMobil supports the Paris climate agreement, yet was named one of the top three global corporations lobbying against effective climate policy, (“When Corporations Take Credit for Green Deeds Their Lobbying May Tell Another Story,” The Conversation, July 17, 2018), and the Chamber undermined the Paris climate accord (“Paris Pullout Pits Chamber against Some of Its Biggest Members,” Bloomberg, June 9, 2017). As shareholders, we believe that companies should ensure there is alignment between their own positions and their lobbying, including through trade associations.

Thanks to Walden Asset Management for Above Information