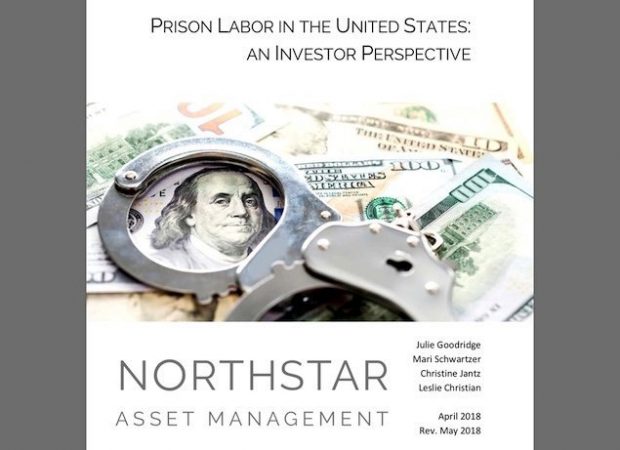 Prison Labor concerns raised again by NorthStar Asset Management won nearly 29% of shareholder votes at Costco Wholesale meeting on January 24, up from almost 5% last year.  The proposal asked for enhanced analysis and disclosure on risks related to prison labor in the company’s supply chain. Yes, if you just read that old link from a Change.org survey you saw the Thirteenth Amendment to our Constitution (to abolish slavery) includes the following:

Neither slavery nor involuntary servitude, except as a punishment for crime whereof the party shall have been duly convicted, shall exist within the United States, or any place subject to their jurisdiction.

From my quick analysis of early reports, it looks like BNY Mellon, AllianceBernstein, MFS Investment, 1832 Asset Management, CalSTRS, PNC Capital, Robeco, OPERS, ERS of Texas, Illinois State Board of Investment, and Pennsylvania State Employees’ Retirement System, among others, voted against. Why are public funds voting against this proposal? We will learn more when most funds file their N-PX disclosures in August. In this world of instant everything, why should we have to wait so long to find out? Why can funds continue to report using thousands of pdfs, which need to either be analyzed by expensive artificial intelligence or an army of humans? We need real-time disclosure of proxy votes in database format. For example, compare CalSTRS’ sortable real-time disclosures with those of State Street Institutional Investment Trust. (not on this issue)

This year marks the second year of engagement with Costco regarding prison labor. After NorthStar’s 2018 shareholder proposal, Costco put in place a new Global Policy on Prison Labor that sets forth certain minimum standards for any suppliers using prison labor to produce goods sold in Costco stores. Given the company’s disclosure that it had found incidences of prison labor in its supply chain, NorthStar filed a new proposal seeking disclosure of the company’s diligence to verify that suppliers are complying with the new policy.

Our concern is that the new Global Policy on Prison Labor is insufficient. Prison labor in the United States will be a continuation of slave labor unless corporate America establishes fair wages and better treatment, far above the minimum standards currently in place in state prison systems. Monitoring prison labor to meet insufficient standards is better than nothing, but is simply not enough. Fair wages, training and job placement upon release must be offered and required by companies before they earn one penny of profit.

Goodridge explained NorthStar’s commitment on this issue by discussing the historical context.

In the 19th century, the United States abolished slavery ‘except as punishment for crime,’ allowing the use of slave labor rather than paid labor for early corporate profit. We believe this tradition continues, as some inmates are producing products or performing services for outside suppliers to various organizations, including publicly traded companies.

NorthStar began filing shareholder proposals on the topic of prison labor in corporate supply chains in 2017, the result of a multi-year research project that NorthStar considers part of its fiduciary duty to clients. Mari Schwartzer, NorthStar’s Director of Shareholder Activism and Engagement, and one of the lead researchers on the paper which is available on NorthStar’s website, added the following:

In 2015, when another food retailer was faced with a boycott for exposure to prison labor in its supply chain, we knew that we needed to investigate this issue further. We discovered that information on prison labor was piecemeal and murky, so we set out to map prison labor to the best of our abilities.

Costco did not seek to engage with us this year but instead opted to put minimal disclosures in its proxy statement to explain the results of its audits that included prison labor. The shareholder vote of nearly 29% shows that if a company discovers prison labor in its supply chain, shareholders want disclosure on how the company is proactively managing that risk.

Schwartzer also noted that she hopes that the shareholder response will encourage Costco and other companies to adopt progressive policies that will push suppliers using prison labor to treat incarcerated individuals fairly, and to adopt procedures that could potentially enhance the opportunities for incarcerated people after release.

That’s an important point. Our country has so many people in prison we should not just wash our hands and avoid use. We need to ensure prison labor is not treated like slaves. Prisoners need to learn skills needed to get good jobs once they are released.

Report Recommendations Re Use of Prison Labor

NorthStar Asset Management, Inc. is a progressive wealth management firm based in Boston with a mandate to invest responsibly.  At NorthStar, creative shareholder engagement is a positive force for change. I have been delighted to work with them on other issues, such as dual-class shares that deny equal rights for shareholders.