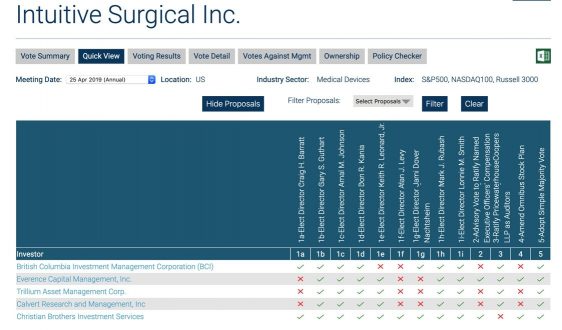 Intuitive Surgical, Inc. (ISRG), designs, manufactures, and markets da Vinci surgical systems, and related instruments and accessories. Most retail shareholders do not vote.  Reading through 70+ pages of the proxy takes too much time. Your vote will make only a small difference but could be crucial. Below, how I voted and why.

Egan-Jones Proxy Services recommends FOR, with EXCEPTION of (1F) Alan J. Levy, Ph.D., (1H) Mark J. Rubash, and (1I) Lonnie M. Smith. With respect to Levy and Rubbish, they have served 10 years or more so can no longer be considered independent for purposes of sitting on key Board committees namely Audit, Compensation and Nominating.

With regard to Smith, Egan-Jones’ Proxy Guidelines state that the Chairman of the Board should be held accountable in cases when the Company obtains the score of Needs Attention on the Cyber Security Risk Rating. This is a relatively new policy. I will wait until next year on that one.

Vote AGAINST Levy and Rubash.

Intuitive Surgical’s Summary Compensation Table shows the highest paid named executive officer (NEO) was CEO Gary S. Guthart, PhD at $6.4M. I’m using Yahoo! Finance to determine market cap ($66.7B) and I define large-cap as $10B, mid-cap as $2-10B, and small-cap as less than $2B. Intuitive Surgical is a large-cap company.

Egan-Jones Proxy Services uses a proprietary rating compensation system to measures wealth creation in comparison to other companies. “Superior” is their compensation rating for Intuitive Surgical. They recommend a vote of FOR on the say-on-pay item. I agree.

I have no reason to believe the auditor engaged in poor accounting practices or has a conflict of interest. Egan-Jones recommends voting against the auditor, I am not certain if it is because one of the committee members has served for more than 10 years, so their independence is compromised or it is because PricewaterhouseCoopers was fined again by the Public Company Accounting Oversight Board. No other issues appear significant. I am voting FOR.

Persons eligible to participate in the Amended 2010 Plan include the eight non-employee members of the Board, approximately 5,527 employees of the Company and its subsidiaries and affiliates (including the executive officers), and consultants to the Company and its subsidiaries, as determined by the Compensation Committee. Shareholder Equity Dilution is 5.6%, a reasonable amount to provide employee incentives. Egan-Jones recommends for; I concur.

Egan-Jones believes the advantages of eliminating supermajority provisions outweigh the benefits of maintaining it as a voting standard. A simple majority vote will strengthen the Company’s corporate governance practice. Contrary to supermajority voting, a simple majority standard will give the shareholders equal and fair representation in the Company by limiting the power of shareholders who own a large stake in the entity, therefore, paving way for a more meaningful voting outcome. They recommend For, as of course do I.

Proxy Insight had so far reported votes as shown below. 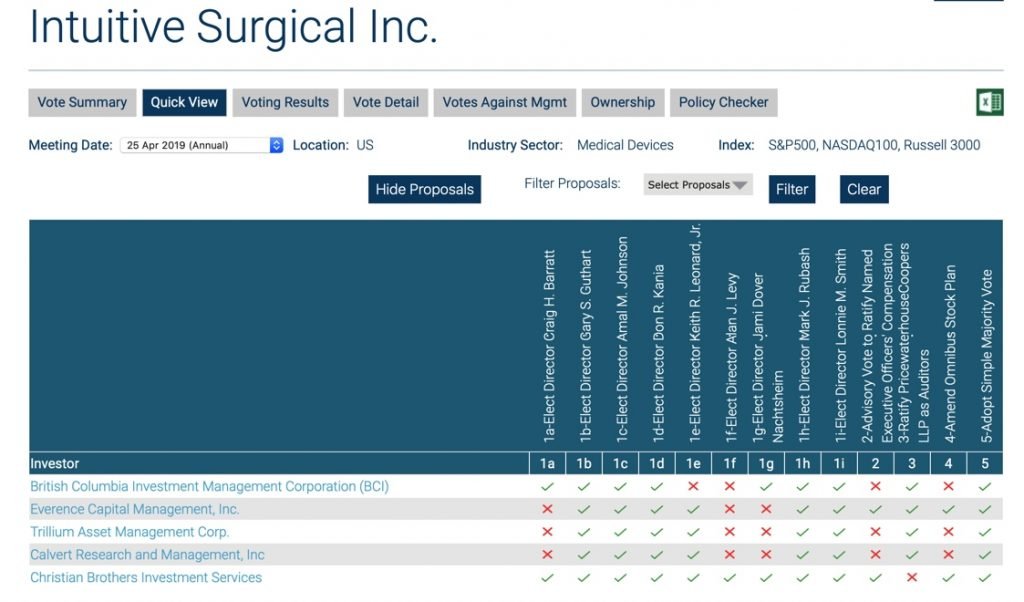 Any stockholder who meets the requirements of the proxy rules under the Securities Exchange Act of 1934, as amended (the “Exchange Act”), may submit to the Board proposals to be considered for submission to the stockholders at the 2020 Annual Meeting of Stockholders. In order to be considered for inclusion in the proxy material to be disseminated by the Board, your proposal must comply with the requirements of Rule 14a-8 under the Exchange Act and be submitted in writing by notice delivered or mailed by first-class United States mail, postage prepaid, to our Corporate Secretary at:

and must be received no later than November 16, 2019. Your notice must include the following: