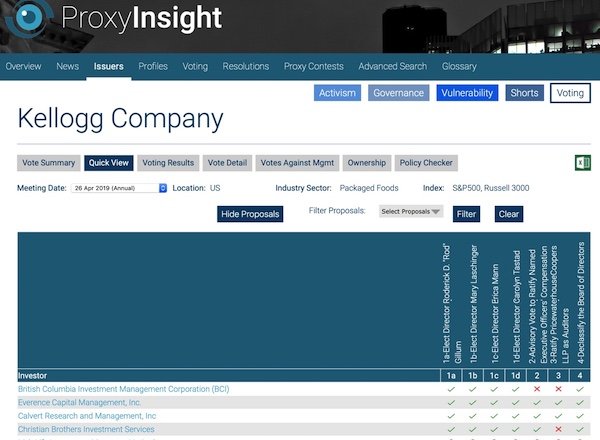 Kellogg 2019 annual meeting is April 26th. Stock price fared poorly for the last five years, so the CEO should not be paid as if he had average performance. Vote AGAINST pay. The Compensation Committee should not be reelected, since they recommended average pay for below average performance. Vote AGAINST Laschinger and Tasted. Vote AGAINST ratifying the auditor. They have served for more than seven years, so independence is questionable. Vote FOR declassifying the board, so that we can hold each member accountable every year.

Kellogg Company (K), together with its subsidiaries, manufactures and markets ready-to-eat cereal and convenience foods. solutions for corporations, institutions, families, and individuals worldwide. Most shareholders do not vote.  Reading through 70+ pages of the proxy takes too much time. Your vote will make only a small difference but could be crucial. Below, how I voted and why.

From the Yahoo Finance profile: Kellogg Company’s ISS Governance QualityScore as of April 1, 2019 is 7. The pillar scores are Audit: 1; Board: 6; Shareholder Rights: 9; Compensation: 1.

Egan-Jones Proxy Services recommends FOR, without exception. Audit, Compensation and Corporate Governance/Nominating committees, were solely of Independent outside directors. Also, each director attended at least 75% of all the meetings of the Board and of the committees during fiscal year 2018.

Given severe sustained underperformance, I voted against the say-on-pay and members of the compensation committee up for election:

Vote AGAINST Laschinger and Tastet.

Kellogg’s Summary Compensation Table (p. 41) shows the highest paid named executive officer (NEO) was Chairman and CEO Steve Cahillane at $10.0M. I’m using Yahoo! Finance to determine market cap ($20.1B) and I define large-cap as $10B, mid-cap as $2-10B, and small-cap as less than $2B. Kellogg is a large-cap company.

Given severe underperformance, I voted against and also voted against members of the compensation committee. I cannot support median pay for such poor performance. Yes, the CEO’s tenure is rather short but pay should be geared to past performance, not simply hopes for the future.

I have no reason to believe the auditor engaged in poor accounting practices or has a conflict of interest. Egan-Jones recommends voting against the auditor if they served for seven years. Independence becomes compromised by that time. PricewaterhouseCoopers has served more than seven years. No other issues appear significant.

This good governance proposal is from me (James McRitchie), so of course I support it. Egan-Jones writes, “We believe that staggered terms for directors increase the difficulty for shareholders of making fundamental changes to the composition and behavior of a board. We prefer that the entire board of a company be elected annually to provide appropriate responsiveness to shareholders. We recommend a vote FOR this Proposal.”

89% of the S&P 500 have declassified their boards. According to one of our largest shareholders; BlackRock, “Directors should be elected annually to discourage entrenchment and allow shareholders sufficient opportunity to exercise their oversight of the board.” BlackRock voted for shareholder proposals to declassify boards 8 times out of 8 in 2018 as of early August, as did Vanguard. It is important to note, the Board of Kellogg’s does not oppose the proposal. Instead, it takes no position.

Proxy Insight reported the votes of three funds as I wrote up my recommendations.  By now, they may have updated those reporting prior to the AGM. You can look up several funds on our Shareowner Action Handbook, You are sure to find more if you wait until the last day to vote online, April 25. Update: Norges Bank indicates they will vote FOR our declassify proposal.

Shareowner proposals submitted for inclusion in our proxy statement for the 2020 Annual Meeting of Shareowners must be received by us no later than November 7, 2019. Address is unclear but is probably: Kellogg Company, P.O. Box 3599, One Kellogg Square, Battle Creek, MI 49016-3599