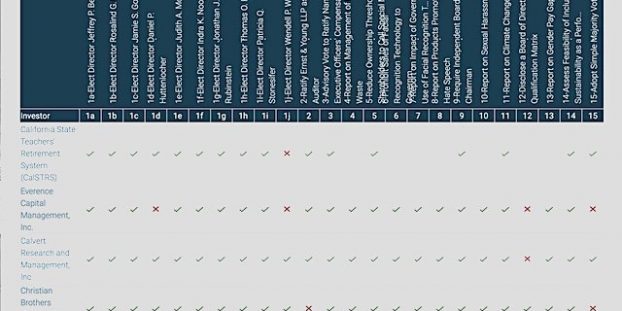 Amazon 2019 annual meeting is May 22nd, so vote online by May 21st. To enhance long-term shareholder value, vote AGAINST Thomas Ryder, pay and auditor. Vote FOR all shareholder proposals EXCEPT #12 Report on Board Ideologies.

Amazon.com, Inc. engages in the retail sale of consumer products and subscriptions in North America and internationally. Most shareholders do not vote.  Reading through 50+ pages of the proxy takes too much time. Your vote will make only a small difference but could be crucial. Below, how I voted and why.

If you have read these posts related to my portfolio and proxy proposals for the last 24 years and trust my judgment, skip the 10 minute read. See how I voted my ballot. Voting will take you only a minute or two. Every vote counts.

From the Yahoo Finance profile: Amazon.com, Inc.’s ISS Governance QualityScore as of April 1, 2019 is 6. The pillar scores are Audit: 1; Board: 9; Shareholder Rights: 1; Compensation: 9.

Also, according to Egan-Jones’ Proxy Guidelines a director whose tenure on the Board is 10 years or more is considered affiliated, with the exception of diverse nominees.

I have no reason to believe the auditor engaged in poor accounting practices or has a conflict of interest. Egan-Jones recommends voting against the auditor if they served for seven years. Independence becomes compromised by that time. Ernst & Young, LLP served more than seven years. No other issues appear significant.

Amazon’s Summary Compensation Table shows the highest paid named executive officer (NEO) was Andrew R. Jassy, CEO Amazon Web Services, at $19.7M. I’m using Yahoo! Finance to determine market cap ($19.8B) and I define large-cap as $10B, mid-cap as $2-10B, and small-cap as less than $2B. Amazon is, or course, a large-cap company.

Egan-Jones Proxy Services uses a proprietary rating compensation system to measures wealth creation in comparison to other companies. “Superior” is their compensation rating for Amazon. They recommend a vote For the say-on-pay item.

Trillium voted against: “CEO pay is not tied to ESG performance. The company CEO-worker pay ratio exceeds 50:1. The previous year’s restricted shares and stock options awarded to the CEO vest over less than five years.” Given those reasonable concerns, above median pay and my concern for growing wealth inequality, I voted AGAINST but performance has been so good that I did not vote against the compensation committee.

Proposal by the JLens Network requests annual report on environmental and social impacts of food waste. Egan-Jones recommends against. I recommend FOR. It is a report. The cost will be minimal and should give Amazon another thing to brag about… if they are doing it right.

This good governance proposal is mine, so of course I voted FOR. Egan-Jones recommends against, because they appear to believe a threshold below 20% makes special meetings too easy, therefore too frequent and expensive. Currently, Amazon requires a 30% threshold. That means shareholders would need hold about $300B. I think a 20% threshold of about $200B is plenty high enough to avoid unnecessary meetings.

This proposal is by Sisters of St. Joseph of Brentwood. The title for the proxy card was changed by Amazon to “Requesting a Ban on Government Use of Certain Technologies.” However, the requested would be temporary, until Amazon determines if sale would cause or contribute to actual or potential violations of civil and human rights. Egan-Jones recommends Against. I say, we should have the report before Amazon sells they technology to governments, such as the US or China.

7. Shareholder Proposal: Report on the Impact of Government Use Of Certain Technologies

This proposal by Harrington Investments calls for study only, not a ban. Similar arguments apply.

I am not sure who the proponent is but they are simply asking for a report on Amazon’s “efforts to address hate speech and the sale of offensive products throughout its businesses.” They have policies but it appears they are not being uniformly applied. Egan-Jones recommends against. I recommend For.

* Egan Jones Recommends a Vote FOR the remaining shareholder proposals.

Good governance policy we can all agree with from SumofUs. CEO should not be their own boss.

A review and assessment of policies related to sexual harassment is appropriate, given the damage lack of such policies can have.

This proposal comes from brave employees at Amazon. Proposals by employees, especially on such an important topic, should be encouraged.

While boards should reflect a broad spectrum of opinions, there is no role for dogmatic ideology in the boardroom. No need to seek a balance of communists and fascists on the Amazon board. In fact, no ideologues on the board would be a plus.

This proposal from Zevin Asset Management seeks a report assessing the feasibility of integrating sustainability metrics, including metrics regarding diversity among senior executives, into performance measures or vesting conditions that may apply to senior executives under the Company’s compensation plans or arrangements. If we do not address climate change, we will not have a salubrious planet. What could be more important?

This proposal from Bruce Herbert and Investor Voice is the most important widely ignored and under-reported problem in corporate elections and governance. Right now at Amazon and many other undemocratic companies, abstentions on proxy proposals are counted as votes against. If we wanted our votes to count as against, we would vote against. This proposal requests that all non-binding matters presented by shareholders be decided by a simple majority of the votes cast FOR and AGAINST an item.

Proxy Insight reported quite a few votes, as presented in the graphic at the top of this post. Click on the graphic to expand. You may find more by looking up funds on our Shareowner Action Handbook.

To be considered for inclusion in the proxy statement and proxy card for the 2020 Annual Meeting, proposals must be submitted in writing to the Corporate Secretary of Amazon.com, Inc. and  received no later than 6:00 p.m., December 13, 2019. The submission of a shareholder proposal or proxy access nomination does not guarantee that it will be included in our proxy statement. (edited for readability)