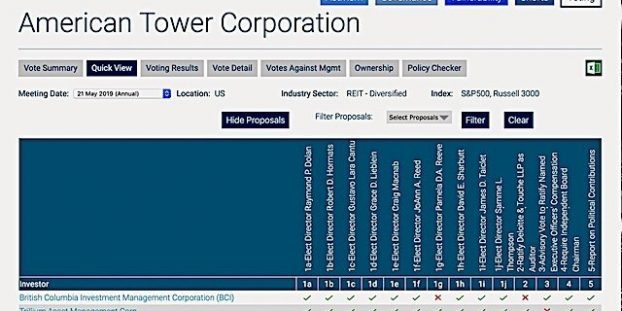 American Tower (AMT), one of the largest global REITs, is a leading independent owner, operator and developer of multitenant communications real estate with a portfolio of approximately 171,000 communications sites. Most shareholders do not vote.  Reading through 83+ pages of the proxy takes too much time. Your vote could be crucial. Below, how I voted and why.

I voted with the Board’s recommendations 43% of the time. View Proxy Statement via SEC’s EDGAR system (look for DEF 14A).

American Tower Corporation (REIT)’s ISS Governance QualityScore as of April 1, 2019 is 2. The pillar scores are Audit: 1; Board: 4; Shareholder Rights: 2; Compensation: 7.

Egan-Jones Proxy Services recommends Against (1A) Raymond P. Dolan and (1H) David E. Sharbutt for lack of independence after serving on the board for over 10 years (16 and 13 years respectively). They also recommend against  (1I) James D. Taiclet for failing to adequately address cybersecurity issues. I see Pamela Reeve has been a director since 2002, so should also be turned out because she cannot really be independent as lead director after all that time served.

I have no reason to believe the auditor engaged in poor accounting practices or has a conflict of interest. Egan-Jones recommends voting against the auditor if they served for seven years. Independence becomes compromised by that time. Deloitte & Touche, has served more than seven years. No other issues appear significant.

American Tower’s Summary Compensation Table shows the highest paid named executive officer (NEO) was Chairman of the Board, President, and CEO James D. Taiclet at $14.3M. I’m using Yahoo! Finance to determine market cap ($89.5B) and I define large-cap as $10B, mid-cap as $2-10B, and small-cap as less than $2B. American Tower is a large-cap company.

Given far above median pay, a high pay ratio and my concern for growing wealth inequality, I voted against. However, since it was a borderline decision, I did not vote against the compensation committee.

This good governance proposal comes from John Chevedden. Egan-Jones notes, “there is an inherent potential conflict, in having an Inside director serve as the Chairman of the board. Consequently, we prefer that companies separate the roles of the Chairman and CEO and that the Chairman be independent to further ensure board independence and accountability. ” They recommend For.

This good governance proposal comes from me, James McRitchie on behalf of my wife Myra Young, so of course we voted FOR. Egan-Jones disagrees. The Company argues they comply with the laws. However, they laws allow dark money contributions.

Proxy Insight had reported the votes of eight funds as I wrote up my recommendations.  See chart at the top of this post. (click top image to expand)

You may find more votes using our Shareowner Action Handbook.

Pursuant to Rule 14a-8 of the Exchange Act, we must receive any stockholder proposal intended to be presented at our 2020 Annual Meeting of Stockholders by no later than December 12, 2019, if it is to be included in the proxy statement and form of proxy relating to the meeting. Any such proposal must also comply with the other requirements of Rule 14a-8.