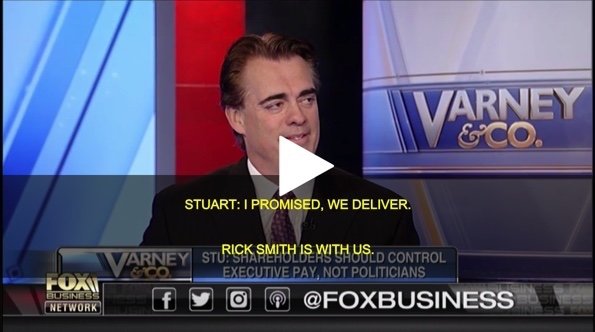 Axon 2019 annual meeting is May 31st. To enhance long-term value. Vote AGAINST both director nominees, Pay, & Auditor. Vote FOR Declassify the Board and Remove Supermajority Requirements.

Axon Enterprise, Inc. (AAXN) develops, manufactures, and sells conducted energy weapons (CEWs) worldwide. Most shareholders do not vote.  Reading through 57+ pages of the proxy takes too much time. Your vote could be crucial. Below, how I voted and why.

I voted with the Board’s recommendations 17% of the time. View Proxy Statement via SEC’s EDGAR system (look for DEF 14A).

I voted against both Michael Garnreiter and Hadi Partovi, for their role in approving absurdly high compensation for the CEO.

Axon’s Summary Compensation Table shows the highest paid named executive officer (NEO) was CEO Patrick W. Smith at $246.0M. I’m using Yahoo! Finance to determine market cap ($4.0B) and I define large-cap as $10B, mid-cap as $2-10B, and small-cap as less than $2B. Axon is a mid-cap company.

According to the Equilar Top 25 Executive Compensation Survey 2015, the median CEO compensation at mid-cap corporations was $8.4M in 2014. Axon shares outperformed the NASDAQ over the most recent one, two, and fi

The Company should re-evaluate and re-assess its Remuneration Policy regarding CEO performance awards  to ensure that the interests of the key individuals are aligned with the business strategy and risk tolerance, objectives, values and long-term interests of the Company and will be consistent with the “pay-for-performance” principle. Accordingly, we recommend a vote AGAINST this Proposal.

I have no reason to believe the auditor engaged in poor accounting practices or has a conflict of interest. Egan-Jones recommends voting against the auditor if they served for seven years. Independence becomes compromised by that time. Grant Thornton, LLP has served more than seven years. No other issues appear significant.

4. Board Proposal: Declassify the Board

This good governance proposal is a direct result of my proposal from last year on the same topic that passed with 85% of shares voted and by 78% of outstanding shares. As noted by Egan-Jones, “staggered terms for directors increase the difficulty for shareholders of making fundamental changes to the composition and behavior of a board.”

Although the Board recommends FOR, the affirmative vote of the holders of 75% of the outstanding shares of our common stock is necessary for passage. Abstentions and broker non-votes will have the effect of a vote against this proposal, so do not abstain. Will Axon solicit votes on this measure or is it just going through the motions?

This good governance proposal comes from me, James McRitchie, so of course I voted FOR. Small factions should not prevent those holding a majority of shares from acting. “The Board of Directors is not recommending a vote for or against Proposal No. 5.”

Proxy Insight had reported the votes of  three funds:

In looking up a few funds on our Shareowner Action Handbook, I did not see any additional disclosures as of May 27,

To be eligible for inclusion in the Company’s proxy materials for the 2020 Annual Meeting of Shareholders, a proposal intended to be presented by a shareholder for action at that meeting must, in addition to complying with the shareholder eligibility and other requirements of the SEC’s rules governing such proposals, be received not later than December 20, 2019 by the Corporate Secretary of the Company at the Company’s principal executive offices, 17800 North 85th Street, Scottsdale, Arizona 85255.

According to 8-K our proposal to remove supermajority requirements passed, winning 96.6%of the vote with 39,496,244 shares voted FOR and 1,370,952 AGAINST. However, management lost its proposal to declassify the Board because, although they won 98% of the vote, they  only won 71% of votes outstanding, instead of the required 75%. How hard did they push? Not hard enough.