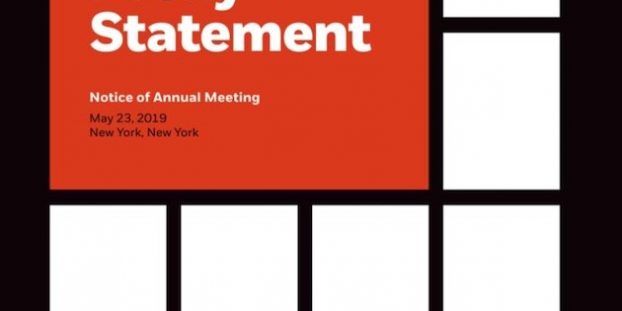 Most shareholders do not vote.  Reading through 70+ pages of the proxy takes too much time. Your vote will make only a small difference but could be crucial. Below, how I voted and why. If you have read these posts related to my portfolio and proxy proposals for the last 22 years and trust my judgment, skip the 8 minute read. See how I voted my ballot. Voting will take you only a minute or two. Every vote counts.

I voted with the Board’s recommendations 45% of the time. View Proxy Statement via SEC’s EDGAR system (look for DEF 14A).

From the Yahoo Finance profile: BlackRock, Inc.’s ISS Governance QualityScore as of April 1, 2019 is 4. The pillar scores are Audit: 1; Board: 4; Shareholder Rights: 5; Compensation: 7.

Sustainalytics’ ESG Ratings on Yahoo Finance measures how well companies proactively manage their most material environmental, social and governance issues. The following is a graphic assessment of BlackRock’s ability to mitigate ESG risks. The ESG Rating is a quantitative score on a scale of 1-100, based on a balanced scorecard system. 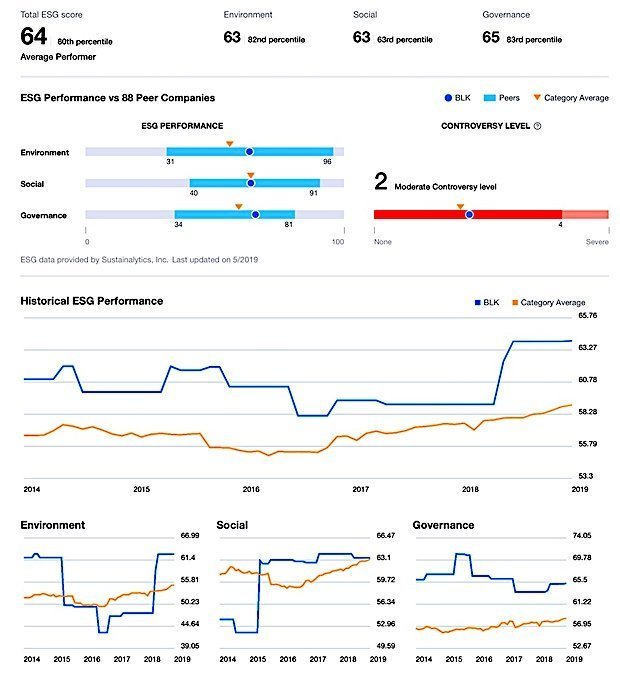 BlackRock’s Summary Compensation Table shows the highest paid named executive officer (NEO) was Chairman and CEO Laurence D. Fink at $26.5M. I am using Yahoo! Finance to determine market cap ($69B) and define large-cap as $10B, mid-cap as $2-10B, and small-cap as less than $2B. BlackRock is a large-cap company.

Egan-Jones Proxy Services uses a proprietary rating compensation system to measures wealth creation in comparison to other companies. “some concerns” is their compensation rating for BlackRock. They recommend a vote of Against for the say-on-pay item.

Given that recommendation, far above median pay, consistently poor performance and my concern for growing wealth inequality:

I have no reason to believe the auditor engaged in poor accounting practices or has a conflict of interest. Egan-Jones recommends voting against the auditor if they served for seven years. Independence becomes compromised by that time. Deloitte & Touche has served more than seven years. No other issues appear significant.

This good governance proposal comes from Unitarian Universalist Association. “We are concerned that BlackRock’s lack of disclosure presents reputational risks when its lobbying contradicts company public positions.” Egan-Jones believes the requested report is unnecessary and would require expenditures without providing any meaningful benefit to the shareholders. I agree with the Unitarians and routinely vote for proposals to disclose both political and lobbying expenses.

This proposal from me (James McRitchie), so of course I voted FOR. Egan-Jones notes, “the advantages of eliminating supermajority provisions outweigh the benefits of maintaining it as a voting standard. They recommend FOR.

I assume many voting against the proposal have bought into BlackRock’s argument  that their three supermajority requirements are “protecting the majority voting standard generally applicable for amending the Company’s Charter.” However, far from being a simple majority standard, amendment requires a majority vote of shares outstanding and many shares are not voted.

Proxy Insight reported on seven funds. Click on the graphic below to expand it. You may find additional fund votes by looking up funds in our Shareowner Action Handbook. 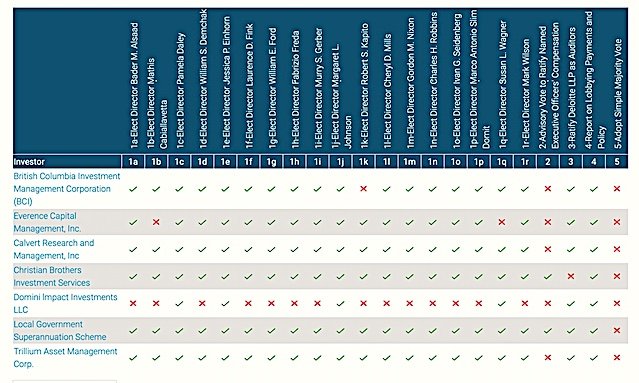 Shareholders who wish to present proposals for inclusion in the proxy materials to be distributed by us in connection with our 2020 Annual Meeting of Shareholders must submit their proposals to BlackRock’s Corporate Secretary on or before December 14, 2019.