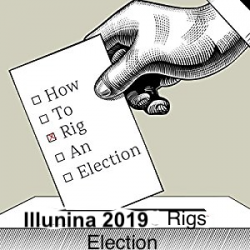 Illumina 2019 annual meeting is May 29th. To enhance long-term value. Vote AGAINST Frances Arnold, Pay, & Auditor. Vote FOR Declassify the Board and Disclose Political Contributions.

Illumina, Inc. (ILMN) provides sequencing and array-based solutions for genetic analysis. Most shareholders do not vote.  Reading through 74+ pages of the proxy takes too much time. Your vote could be crucial. Below, how I voted and why.

I voted with the Board’s recommendations 43% of the time. View Proxy Statement via SEC’s EDGAR system (look for DEF 14A).

Corporate governance scores courtesy of Institutional Shareholder Services (ISS). Scores indicate decile rank relative to index or region. A decile score of 1 indicates lower governance risk, while a 10 indicates higher governance risk. We need to pay close attention to members of the Board, Shareholder Rights, and Compensation issues.
Sustainalytics’ ESG Ratings measure how well companies proactively manage and mitigate material environmental, social and governance (ESG) risks. The ESG Rating is a quantitative score on a scale of 1-100. Environmental and Social risks are improving, whereas as Governance risks are rising.

I would have voted against Robert S. Epstein, M.D., Chair of the Nominating and Governance Committee, for his role in approving how abstentions are counted as “against votes” when it comes to shareholder proposals. That is clearly rigging the vote. Unfortunately, he is not up for election, so I voted against Frances Arnold, a member of that Committee.

Illumina’s Summary Compensation Table shows the highest paid named executive officer (NEO) was President, CEO, and Director Francis A. deSouza at $11.1M. I’m using Yahoo! Finance to determine market cap ($45.2B) and I define large-cap as $10B, mid-cap as $2-10B, and small-cap as less than $2B. Illumina is a large-cap company.

According to the Equilar Top 25 Executive Compensation Survey 2015, the median CEO compensation at large-cap corporations was $10.3M in 2014. Illumina shares outperformed the NASDAQ over the most recent one, two, and fi

Given above median pay (especially within Health sector) and my concern for growing wealth inequality, I voted against. However, since it was a close call, I did not vote against the compensation committee.

Vote Rigging on Shareholder Proposals: At Illumina, “abstentions” (not just votes left blank) are treated as votes AGAINST.  If you mark your ballot to ABSTAIN because you do not want your vote counted, Illumina will ignore your wish and instead count it as a vote AGAINST.  This vote-rigging leads me to vote against Robert S. Epstein, M.D. of the nominating and governance committee, because he approved this deceitful tactic.  If Illumina is going to count ABSTAIN as AGAINST, do not offer ABSTAIN as a voting option. This unusual voting policy is designed to disenfranchise shareholders by over counting AGAINST votes on these critical issues.

4. Board Proposal: Declassify the Board

This good governance proposal is a direct result of my proposal from last year on the same topic that passed with 85% of shares voted and by 78% of outstanding shares. As noted by Egan-Jones, “staggered terms for directors increase the difficulty for shareholders of making fundamental changes to the composition and behavior of a board.”

This good governance proposal comes from me, James McRitchie, so of course I voted FOR. Egan-Jones disagrees. The Company argues they comply with the laws. However, the laws allow dark money contributions. Anyone concerned with our ability to ensure Illumina’s political contributions are in the best interests of shareholders should vote FOR this proposal.

Proxy Insight had not reported votes as of when I last checked. They may have updated by the time I post this.

Under SEC Rule 14a-8, a stockholder who intends to present a proposal at our 2020 annual meeting of stockholders (other than a director nomination) and who wishes the proposal to be included in the proxy statement for that meeting must submit the proposal in writing to our principal executive offices. The proposal must be received no later than December 18, 2019. The proposal and its proponent must satisfy all applicable requirements of Rule 14a-8.