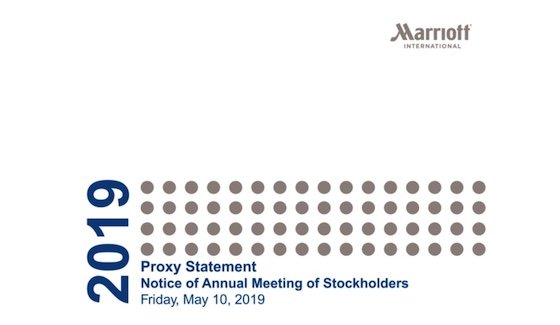 Marriott International, Inc. (MAR) is a lodging company, which engages in the operation and franchise of hotel, residential, and timeshare properties. As of April 10, 2019, it operated approximately 7,000 properties under 30 hotel brands in 130 countries and territories. The company is headquartered in Bethesda, MD.

Most shareholders do not vote.  Reading through 70+ pages of the proxy takes too much time. Your vote will make only a small difference but could be crucial. Below, how I voted and why.

If you have read these posts related to my portfolio and proxy proposals for the last 24 years and trust my judgment, skip the 9 minute read. See how I voted my ballot. Voting will take you only a minute or two. Every vote counts.

I voted with the Board’s recommendations 54% of the time. View Proxy Statement via SEC’s EDGAR system (look for DEF 14A).

From the Yahoo Finance profile: Marriott International, Inc.’s ISS Governance QualityScore as of April 1, 2019 is 6. The pillar scores are Audit: 1; Board: 4; Shareholder Rights: 8; Compensation: 2.

Egan-Jones Proxy Services recommends Against Lawrence W. Kellner, George Muñoz, Steven S. Reinemund, since they have served for 10 years or more and can no longer be considered independent for purposes of serving as a member of the Audit, Compensation or Nominating committees. They also recommend against J.W. Marriot, Jr., since “the Chairman of the Board should be held accountable in cases when the Company obtains the score of Needs Attention on the Cyber Security Risk Rating.”  Agreed.

Since I voted against Executive Compensation I also voted against all members of the compensation committee: Steven S Reinemund (Chair), Mary K. Bush, Eric Hippeau, Aylwin B. Lewis and Susan C. Schwab.

I have no reason to believe the auditor engaged in poor accounting practices or has a conflict of interest. Egan-Jones recommends voting against the auditor if they served for seven years. Independence becomes compromised by that time. Their auditor has served more than seven years. No other issues appear significant.

Marriott’s Summary Compensation Table (p. 49) shows the highest paid named executive officer (NEO) was CEO Arne M. Sorenson at $12.9M. I’m using Yahoo! Finance to determine market cap ($46B) and I define large-cap as $10B, mid-cap as $2-10B, and small-cap as less than $2B. Marriott is a large-cap company.

According to the Equilar Top 25 Executive Compensation Survey 2015, the median CEO compensation at large-cap corporations was $10.3M in 2014. Sorenson’s pay puts Marriott above the 75% level for the S&P 500 in 2018, according to MyLogIQ.

Marriott shares outperformed the S&P 500 over the most recent two and five year time periods, but underperformed during the most recent one year time period. The ratio of the annual total compensation of the CEO to the median of the annual total compensation of all employees was 374:1. A recent report from MyLogIQ, CEO Pay Ratios inthe S&P 500, came out before Marriott issued its proxy but it looks like that ratio may put Marriott in or near the top 20 highest ratios in the S&P 500.

Trillium voted against and noted: “CEO pay is not tied to ESG performance.The company CEO-worker pay ratio exceeds 50:1.The previous year’s restricted shares and stock options awarded to the CEO vest over less than five years.”

Given above median pay, high CEO pay ratio, mixed performance, and my concern for growing wealth inequality, I voted against and also voted against the members of the compensation committee.

These proposals did not just arise out of the goodness of the Board’s hearts. The AFL-CIO filed a proposal to move to a simple majority standard last year. It won more than 65% of the vote. From Egan-Jones:

We believe that a simple majority vote will strengthen the Company’s corporate governance practice. Contrary to supermajority voting, a simple majority standard will give the shareholders equal and fair representation in the Company by limiting the power of shareholders who own a large stake in the entity, therefore, paving way for a more meaningful voting outcome. As such, we recommend a vote FOR this Proposal.

Vote FOR 4A-4E. Removing supermajority standards is usually the most important measure on a proxy. This is no exception.

This good governance proposal comes from Myra Young (my wife, with proposal written by me, James McRitchie), so of course I support it. Egan-Jones advises: “We believe that the right to act by written consent will enable the shareholders to act independently of the management. We recommend a vote FOR this Proposal.”

Domini voted AGAINST Marriott Jr, Bush, Henderson, Kellner, Lee, Reinemund, as well as say-on-pay. Notably, they all voted FOR eliminating supermajority provisions and our proposal to provide a right to act by Written Consent.

In looking up a few funds on our Shareowner Action Handbook, I see Praxis voted AGAINST Kellner and Schwab.

To be considered for inclusion in our proxy statement for the 2020 annual meeting of stockholders, stockholder proposals must be received at our offices no later than the close of business on December 12, 2019. Proposals must comply with Rule 14a-8 under the Securities Exchange Act of 1934 (the “Exchange Act”), and must be submitted in writing to the Corporate Secretary, Marriott International, Inc., Department 52/862, 10400 Fernwood Road, Bethesda, Maryland 20817.