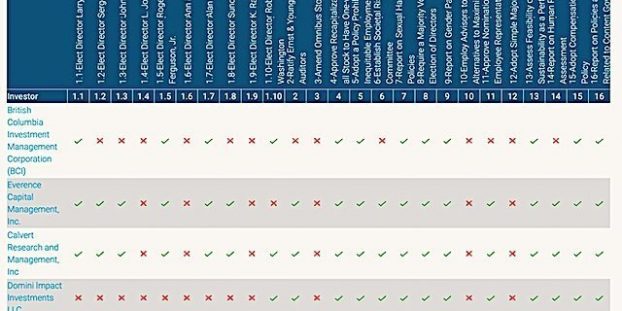 Alphabet 2019 annual meeting is June 19th. To enhance long-term value WITHHOLD vote from all directors. Vote AGAINST all Board proposals and FOR all shareholder proposals, especially #4 to recapitalize shares.


Alphabet 2019 (GOOGL) provides online advertising services in the United States, Europe, the Middle East, Africa, the Asia-Pacific, Canada, and Latin America. Most shareholders do not vote.  Reading through 98+ pages of the proxy takes too much time. Your vote could be crucial. Below, how I voted and why.

Corporate governance scores courtesy of Institutional Shareholder Services (ISS). Scores indicate decile rank relative to index or region. A decile score of 1 indicates lower governance risk, while a 10 indicates higher governance risk. We need to pay close attention to members of the Board, Shareholder Rights, and Compensation issues.
Sustainalytics’ ESG Ratings measure how well companies proactively manage and mitigate material environmental, social and governance (ESG) risks. The ESG Rating is a quantitative score on a scale of 1-100. Environmental and Social risks are improving, whereas as Governance risks are rising.

Withhold from all directors is warranted due to their failure to act on shareholder proposal to recapitalization shares to create equal voting that won an 88% favorable vote by unaffiliated shares.

Alphabet’s Summary Compensation Table shows the highest paid named executive officer (NEO) was Senior Vice President and Chief Financial Officer of Alphabet and Google Ruth M. Porat at $47.3M. I’m using Yahoo! Finance to determine market cap ($720.2B) and I define large-cap as $10B, mid-cap as $2-10B, and small-cap as less than $2B. Alphabet is a large-cap company.

I will follow Calvert’s analysis on this one: Based on an evaluation of the estimated cost, plan features, and grant practices using the Equity Plan Scorecard (EPSC), a vote AGAINST this proposal is warranted due to the following key factors:

This proposal is from our friends at NorthStar. It is by far the most important item on the proxy ballot. Approximately 88% of class A (unaffiliated) shares voted in favor of last year’s proposal to give each share one vote, yet the Company has made no progress on a recapitalization plan to put in place equal voting rights. Shareholders with the most capital at risk have no say in the issues affecting the Company because Class B insiders, with far less capital invested, 10 times the voting rights of Class A shares available to the public. If you cherish democratic corporate governance as well as democratic governance in civil society, vote For.

This urges Alphabet not to engage in any Inequitable Employment Practice. “Inequitable Employment Practices” are mandatory arbitration of employment-related claims, non-compete agreements with employees, agreements with other companies not to recruit one another’s employees, and involuntary non-disclosure agreements (“NDAs”) that employees are required to sign in connection with settlement of claims that any Alphabet employee engaged in unlawful discrimination or harassment. Who could be against upholding simple human rights?

This proposal appears to come from Loring, Wolcott & Coolidge Fiduciary Advisors, LLP. The intent is to ensure the Board provides comprehensive oversight of societal impacts and their potential impacts on long-term value. According to Calvert:

A vote FOR this proposal is warranted because the existing board structure does not appear to provide adequate oversight on potential risks that the company’s existing and emerging technologies present to the company’s stakeholders, which, in turn, creates risks for the company in terms of employee retention, regulatory backlash, and reputational damage with users and advertisers.

Establish a Societal Risk Oversight Board Committee to provide an ongoing review of corporate policies and procedures to assess the potential societal consequences of the Company’s products and services, and should offer guidance on strategic decisions. As with the other Board committees, a formal charter for the Committee and a summary of its functions should be made publicly available. With Alphabet’s impact on society, this seems like a no-brainer. Maintaining the highest ethical standards is paramount.

8. Require a Majority Vote for the Election of Directors

This good governance proposal comes from me, so of course I support. There is no justification for allowing one vote in favor to elect an unopposed directors, despite their inability to win over a majority. 90% of large public companies have a majority vote standard.

The gender pay gap costs the economy $1.2 trillion annually. The median income for women working full time in the United States is 80% of their male counterparts. This disparity can equal nearly half a million dollars over a career. The gap for African American and Latina women is 60% and 55%. At the current rate, women will not reach pay parity until 2059. Reporting on the gender gap is a bare minimum step in the right direction.

Proposal 10 from Sum of Us calls on Alphabet’s board of directors to retain advisors to study strategic alternatives and empower a committee of independent directors to evaluate those alternatives, which may include unification of Class A and B shares or a sale or other disposition of assets. I view it as another form of proposal #4, so support.

This proposal comes from the Change to Win Investment Group. This as the second most important vote on the proxy after proposal #4. Employees and shareholders share a common interest in Alphabet, namely the long-term success of the company. Alphabet’s performance directly impacts employee salaries, benefits, and job security.  While shareholders can easily shed their holdings, it requires more time and planning for an employee to find a new job.  Further, an employee representative would likely be equally scrupulous as any long-term Alphabet shareholder in evaluating governance best practices, including performance based executive compensation practices, clawback mechanisms, and appropriate severance packages.

Codetermination has been in effect in Germany, Scandinavia, and other northern European countries. Elizabeth Warren and Bernie Sanders are both calling for a milder form for the United States, leaving the bulk of directors to be elected by shareholders.  As far as I am concerned, this long overdue.

Over the last decade, big American companies have dedicated 93 percent of earnings to shareholders — redirecting trillions of dollars that could have gone to workers or long-term investments in these corporations.

Eighty percent of the value of stock is owned by only 10 percent of the population. Half of Americans own no stock at all, not even through mutual funds. That is not sustainable. We have to broaden stock ownership to include all Americans. While Americans may not wish to embrace full codetermination (equal representation of shareholders and employees on corporate boards), this proposal could provide a valuable nudge in the right direction. More and more and more.

Calvert warns a vote AGAINST this proposal is warranted, given that co-founders Larry Page and Sergey Brin own a majority of the total voting power. I think they misinterpret the proposal, which requests current voting standards be replaced by a requirement that “a majority of the votes cast for and against applicable proposals” prevail. That implies all votes would be equally weighted.

13. Feasibility of Including Sustainabiity Performance Measure

The proposal asks for a report on integrating diversity and other sustainability metrics into senior executives performance measures. Tying such metrics would likely incentivize executives to perform better, adding value to our company and reducing risk.

Shareholders request the Company publish a Human Rights Impact Assessment examining the actual and potential impacts of censured Google search in China. I agree with Calvert. “Shareholders would benefit from additional information on how the company is assessing human rights risks, including additional information on how it is managing compliance with its policies and related oversight mechanisms.”

The proposal from SEIU seeks a to claw back senior executive incentive compensation following a material violation of law or company policy. The violation must caused significant financial or reputational harm to Alphabet that involves creating a hostile work environment if the senior executive committed the misconduct or failed to manage or monitor relevant conduct or risks. Most other large companies already have such clawback provisions.

16. Report on Policies and Risks Related to Content Governance

Shareholders request a report to shareholders reviewing the efficacy of its enforcement of Google’s terms of service related to content policies and assessing the risks posed by content management controversies related to election interference, freedom of expression, and the spread of hate speech, to the company’s finances, operations, and reputation. That seems critical, especially given the importance of 2020 elections. Better to do it voluntarily, before government officials do it.

Proxy Insight had not reported votes of several when I last checked. See graphic at the top of this post.

In looking up a few funds in our Shareowner Action Handbook, I see Trillium also voted Withhold on all directors. As I recall, CalPERS and CalSTRS have also reported their votes.

1.via mail AND with a copy via email: