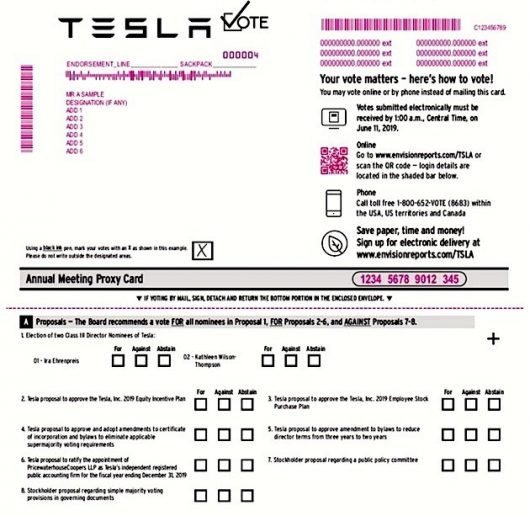 Tesla, Inc. (TSLA) designs, develops, manufactures, and sells electric vehicles, and energy generation and storage systems in the United States, China, Netherlands, Norway, and internationally. Most shareholders do not vote.  Reading through 112+ pages of the proxy takes too much time. Your vote could be crucial. Below, how I voted and why.

I voted with the Board’s recommendations 37% of the time. View Proxy Statement via SEC’s EDGAR system (look for DEF 14A).

From the Yahoo Finance profile: Tesla, Inc.’s ISS Governance QualityScore as of April 1, 2019 is 9. The pillar scores are Audit: 10; Board: 9; Shareholder Rights: 6; Compensation: 9.

Corporate governance scores courtesy of Institutional Shareholder Services (ISS). Scores indicate decile rank relative to index or region. A decile score of 1 indicates lower governance risk, while a 10 indicates higher governance risk. We need to pay close attention to Audit, members of the Board, and Compensation issues.
Sustainalytics’ ESG Ratings measure how well companies proactively manage and mitigate material environmental, social and governance (ESG) risks. The ESG Rating is a quantitative score on a scale of 1-100. If Tesla’s Social and Governance ratings would match its Environmental ratings, it could be unstoppable. 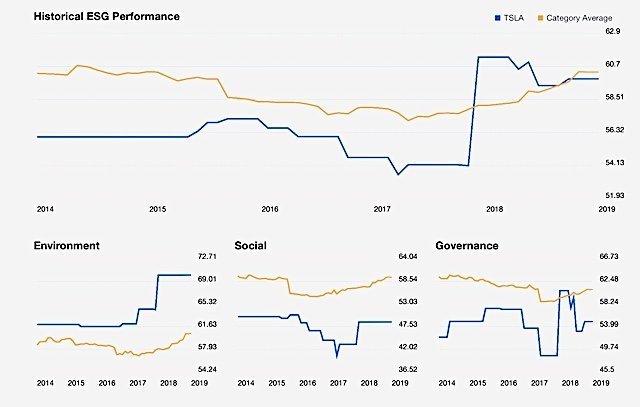 No Say on Pay vote but Tesla’s Summary Compensation Table shows the highest paid named executive officer (NEO) was CEO Elon Musk at $2.3B. I’m using Yahoo! Finance to determine market cap ($33.0B) and I define large-cap as $10B, mid-cap as $2-10B, and small-cap as less than $2B. Tesla is a large-cap company.
According to the Equilar Top 25 Executive Compensation Survey 2015, the median CEO compensation at large-cap corporations was $10.3M in 2014. Tesla shares underperformed the NASDAQ over the most recent one, two, and fi

Because Tesla has a classified board, with directors serving three-year terms, only Ira Ehrenpreis and Kathleen Wilson-Thompson are up for election this year. Given Ms. Wilson-Thompson’s shore tenure on the board, I voted For her but voted Against Ehrenpreis for his role in setting Musk’s unreasonable pay package.

The plan’s dilution exceeds 10 percent. Based on evaluation of the estimated cost, plan features, and grant practices using the Equity Plan Scorecard (EPSC), a vote Against this proposal is warranted:

A vote For this proposal is warranted:

A vote FOR this proposal is warranted given that the reduction in the supermajority vote requirement would enhance shareholder rights and is this management proposal is the direct result of my proposal on the same topic (#8).

A vote FOR this proposal is warranted. The reduction from a three-class to a two-class board structure will represent an improvement in board accountability to shareholders. This good governance proposal is a direct result of my proposal from 2017 on the same topic that passed with 30.5%, a large majority of unaffiliated shares (almost 1/3 of shares were held by insiders who opposed the measure).

As noted by Egan-Jones, “staggered terms for directors increase the difficulty for shareholders of making fundamental changes to the composition and behavior of a board.” This till leaves staggered terms but two year terms are an improvement over three year terms.

I have no reason to believe the auditor engaged in poor accounting practices or has a conflict of interest. Egan-Jones recommends voting against the auditor if they served for seven years. Independence becomes compromised by that time. PricewaterhouseCoopers LLP has served more than seven years. No other issues appear significant.

A vote FOR this resolution by Jing Zhao would be a positive step. A committee dedicated to monitoring social, political, regulatory, and environmental trends would provide enhanced oversight of Tesla’s current policies and any potential related risks.

This good governance proposal comes from me, James McRitchie, so of course I voted FOR. We were in the process of negotiating withdrawal of the proposal because the Board agreed to proposal #4 above, but Tesla went to press with the proxy before a formal withdrawal was agreed upon. Please vote for both measures to reinforce their importance.

Proxy Insight had not reported votes as of when I last checked. They may have updated by the time I post this.

In looking up a few funds in our Shareowner Action Handbook,

Tesla Fails to Pass Simplemajority & shortening board terms to 2 years from 3. 99% of voters approved but $TSLA requires 2/3 of outstanding stock to pass. Hard to see how failed if Musk voted FOR. Board would have held vote open to solicit if they really wanted the change.

For inclusion in Tesla’s proxy materials—Stockholders may present proper proposals for inclusion in Tesla’s proxy statement and for consideration at the next annual meeting of stockholders by submitting their proposals in writing to Tesla’s Corporate Secretary [at our principal executive offices at 3500 Deer Creek Road, Palo Alto, CA 94304] in a timely manner. In order to be included in the proxy statement for the 2020 annual meeting of stockholders, stockholder proposals must be received by Tesla’s Corporate Secretary no later than January 1, 2020, and must otherwise comply with the requirements of Rule 14a-8 of the Securities Exchange Act of 1934, as amended (the “Exchange Act”).