United Therapeutics Corporation (UTHR), a biotechnology company, develops and commercializes products to address the unmet medical needs of patients with chronic and life-threatening diseases primarily in the United States and Europe. Most shareholders do not vote.  Reading through 99+ pages of the proxy takes too much time. Your vote could be crucial. Below, how I voted and why.

I voted with the Board’s recommendations twice, 25% of the time, and one of those votes was for my own proposal. View Proxy Statement via SEC’s EDGAR system (look for DEF 14A).

United Therapeutics Corporation’s ISS Governance QualityScore as of April 1, 2019 is 5. The pillar scores are Audit: 5; Board: 3; Shareholder Rights: 4; Compensation: 8.

Causey and Giltner have served on the board for 10 years or more, so cannot be considered independent. Causey and Olian serve on the Compensation Committee, which awarded excess pay.

Vote: AGAINST Causey, Giltner and Olian. 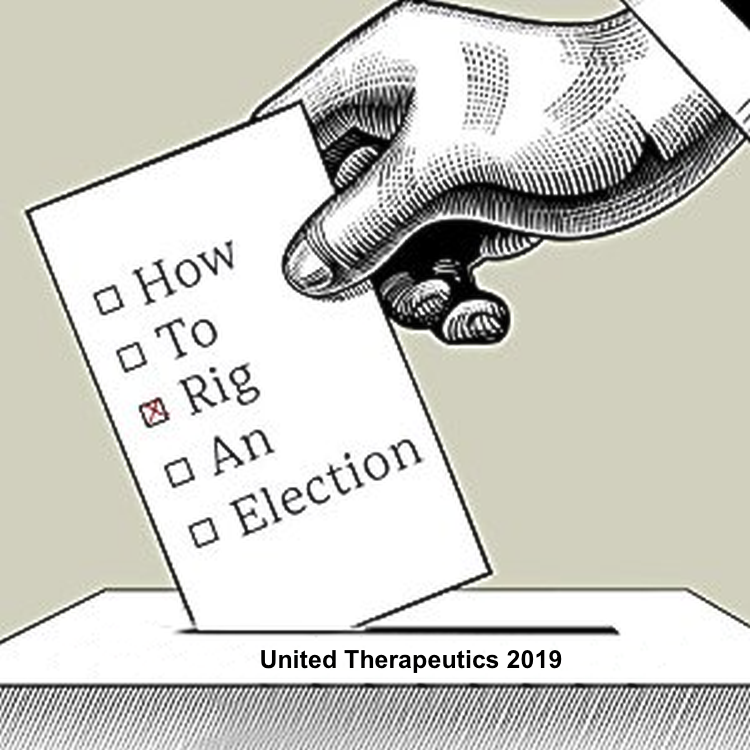 Vote Rigging: United Therapeutics 2019, “abstentions” (not just votes left blank) are treated as votes AGAINST for all items other than directors.  If you mark your ballot to ABSTAIN because you do not want your vote counted, Illumina will ignore your wish and instead count it as a vote AGAINST.  This vote-rigging would have led me to vote against Christopher Patusky of the nominating and governance committee if he had been up for election, because he approved this deceitful tactic.  Unfortunately, the board is staggered, so Patusky is not up for reelection. If United Therapeutics is going to count ABSTAIN as AGAINST, do not offer ABSTAIN as a voting option. This unusual voting policy is designed to disenfranchise shareholders by over counting AGAINST votes on these critical issues.

United Therapeutics’ Summary Compensation Table shows the highest paid named executive officer (NEO) was Chairman and CEO Martine Rothblatt at $16.0M. I’m using Yahoo! Finance to determine market cap ($3.8B) and I define large-cap as $10B, mid-cap as $2-10B, and small-cap as less than $2B. United Therapeutics is a mid-cap company.

According to the Equilar Top 25 Executive Compensation Survey 2015, the median CEO compensation at mid-cap corporations was $8.4M in 2014. United Therapeutics shares underperformed the NASDAQ over the most recent one, two, and fi

Egan-Jones Proxy Services uses a proprietary rating compensation system to measures wealth creation in comparison to other companies. They found “some concerns” and recommended Against.

Given above median pay, poor performance and my concern for growing wealth inequality, I voted against and voted against compensation committee members up for reelection.

I am conflicted on this one. Egan-Jones reports it will result in a 1% dilution of stock, whereas Calvert reports a predicted 10% dilution, so voted Against. NYC Pensions also voted Against, so that did it for me.

5. Board Proposal: Declassify the Board

This good governance proposal is from me, so of course I voted For. As noted by Egan-Jones, “staggered terms for directors increase the difficulty for shareholders of making fundamental changes to the composition and behavior of a board.” Even the Board of United Therapeutics recommend a vote For.

Proxy Insight had reported votes as of when I last checked. See graphic at top of post. They may have updated by the time I post this.

In looking up a few funds in our Shareowner Action Handbook, I see NYC Pensions voted Against pay and stock plan; For everything else.

All notices of proposals or nominations, as applicable, must be given in writing to our Corporate Secretary by overnight mail, acceptance signature required, to United Therapeutics Corporation, Attention: Corporate Secretary, 1735 Connecticut Avenue N.W., Washington, D.C. 20009.

One Response to United Therapeutics 2019: Declassify Board