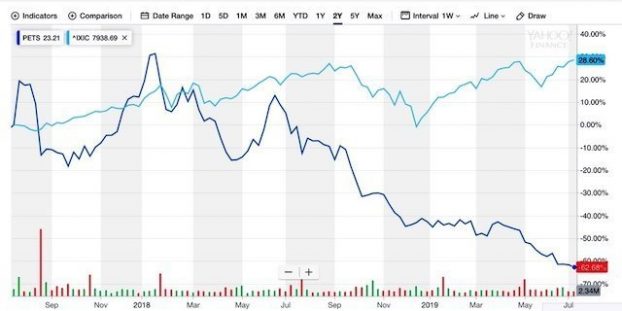 PetMed Express, Inc. (PETS) and its subsidiaries, doing business as 1-800-PetMeds, operates as a pet pharmacy in the United States. Most shareholders do not vote.  Reading through 40+ pages of the proxy takes too much time. Your vote could be crucial. Below, how I voted and why.

I voted with the Board’s recommendations 20% of the time. View Proxy Statement via SEC’s EDGAR system (look for DEF 14A).

Corporate governance scores courtesy of Institutional Shareholder Services (ISS). Scores indicate decile rank relative to index or region. A decile score of 1 indicates lower governance risk, while a 10 indicates higher governance risk. We need to pay close attention to members of the Board and Compensation issues.

Egan-Jones Proxy Services recommends Against (1C) Frank J. Formica, (1D) Gian M. Fulgoni, (1E) Ronald J. Korn and (1F) Robert C. Schweitzer — the first three because they have served on the board for 10 years or longer and can no longer be considered independent. — Schweitzer because the Chairman of the Board should be held accountable in cases when the Company obtains the score of ‘Needs Attention’ on the ‘Cyber Security Risk Rating.’ Calvert indicates, “A vote AGAINST Compensation Committee members Robert Schweitzer, Leslie Campbell, Frank Formica, Gian Fulgoni, and Ronald Korn is warranted for insufficient responsiveness to low shareholder support for the say-on-pay votes in consecutive years.”

While I don’t like the Board bundling changes, most are minor fixes. One exception is reducing the threshold for a special meeting from 20% to 10%. That gives shareholders more power.

PetMed’s Summary Compensation Table (p. 29) shows the highest paid named executive officer (NEO) was CFO Bruce S. Rosenbloom at $866K. I’m using Yahoo! Finance to determine market cap ($351.5M) and I define large-cap as $10B, mid-cap as $2-10B, and small-cap as less than $2B. PetMed is a small-cap company.

According to the Equilar Top 25 Executive Compensation Survey 2015, the median CEO compensation at small-cap corporations was $3M in 2014. PetMed shares underperformed the NASDAQ over the most recent one, two, and fi

According to MyLogIQ, mean CEO compensation among small-caps was $4.1M, median was $3.6M last year. Pay at PetMed puts them about in the bottom 10% of small-caps ($1.2M).

I voted against, primarily because the stock has underperformed so badly during the last 1, 2 and 5 years.

I have no reason to believe the auditor engaged in poor accounting practices or has a conflict of interest. However, the auditor has served for seven years. Independence becomes compromised by that time. RSM US LLP has served more than seven years. No other issues appear significant.

This good governance proposal from me, so I voted for it. As noted by Egan-Jones, “We believe that the advantages of eliminating supermajority provisions outweigh the benefits of maintaining it as a voting standard. We believe that a simple majority vote will strengthen the Company’s corporate governance practice. Contrary to supermajority voting, a simple majority standard will give the shareholders equal and fair representation in the Company by limiting the power of shareholders who own a large stake in the entity, therefore, paving way for a more meaningful voting outcome.” Calvert also voted For: “A vote FOR this proposal is warranted given that elimination of the supermajority vote requirement enhances shareholder rights.”

Proxy Insight had reported only two fund votes as of when I last checked. (see below) They may have updated by the time you read this.

In looking up a few funds in our Shareowner Action Handbook, I see Calvert and Praxis voted the same as I recommend, except that both voted to ratify the auditor. CBIS voted against the auditor and pay.

Pursuant to Rule 14a-8 under the Securities Exchange Act of 1934, as amended (“Exchange Act”) stockholders may present proper proposals for inclusion in the Company’s next year’s proxy statement and for consideration at next year’s annual meeting of stockholders by submitting their proposals to the Company, not less than 120 calendar days prior to the anniversary date of our Proxy Statement distributed to our stockholders in connection with our Annual Meeting. Therefore, proposals that stockholders wish to be included in next year’s proxy statement for the annual meeting of stockholders to be held in 2020 must be received at the Company’s principal place of business at 420 South Congress Avenue, Delray Beach, FL 33445, addressed to the Corporate Secretary’s attention, not later than one hundred twenty (120) calendar days prior to the anniversary date of our Proxy Statement. Upon receipt of any proposal, we will determine whether to include such proposal in accordance with regulations governing the solicitation of proxies.