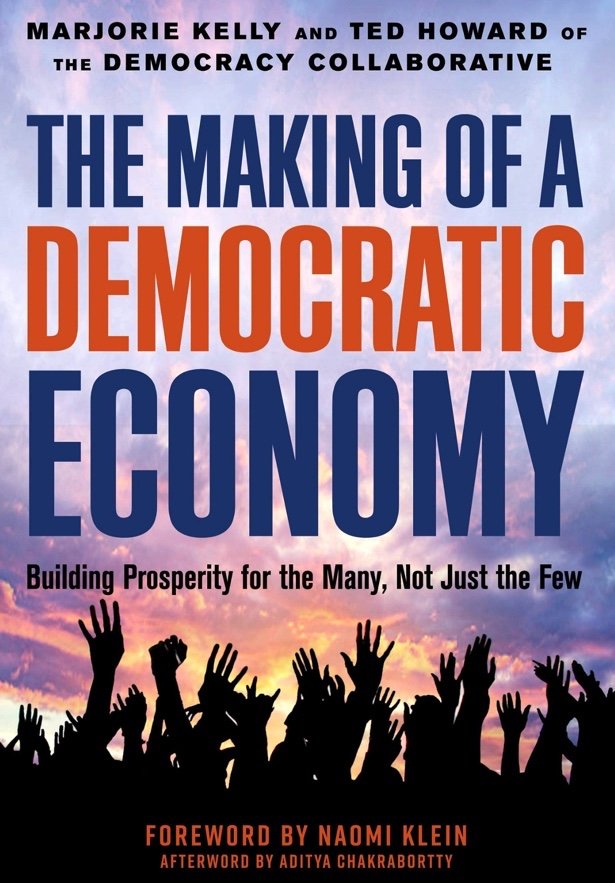 The Making of a Democratic Economy: How to Build Prosperity for the Many, Not the Few by Marjorie Kelly, Ted Howard, Naomi Klein (Foreword). Buy the book. As Naomi Klein notes in the Forward,

We need to know what we are for as well as what we’re against… It’s not enough to imagine that another world is possible; we need to be able to picture it, experience it in miniature, feel and taste it. (ix)

Marjorie Kelly and Ted Howard write about the world many of us would like to inhabit. Their book is not a fantasy of the mind. The authors describe real projects that are shovel ready to scale up, once we wake up from our “we’ve always done it this way” slumber.

Two-thirds of all vertebrates have disappeared from the earth since 1970, part of a sixth mass extinction that is gathering steam. (5) Today, 40% of US jobs are insecure, part-time, contract, gig-economy-type work, and even those jobs are disappearing in the face of offshoring and automation. (6) Wealth inequality has not been this bad since the Gilded Age.

Congress appears dysfunctional. The President does not hesitate to utilize executive orders and edicts by tweet. If Congress eventually takes back more of its law and policy making role, will their actions reflect what most citizens are for? As Benjamin Page and Martin Gilens discussed in Democracy in America? the differences between what multimillionaires, who appear to have veto power over policy changes, and what average citizens want, are stark. See the following table from their book.

Kelly and Howard outline seven principles for a democratic economy, then devote a chapter to each principle.

Working for a Democratic Economy

When I studied employee buyouts of failing companies like Rath Meatpacking and headed California’s Cooperative Development Program in the early 1980s, I helped workers on the fringes of the economy with worker and consumer cooperatives. I could help workers buy out a closing company if they were willing take a big wage cut and invest that lost pay in the company. We called it a “wage deferral,” hoping workers  would eventually get that money back.

Almost forty years later, Kelly, Howard and their Democracy Collaborative are working with large established institutions, including the Cleveland Clinic to develop startups, like the Evergreen Cooperative Laundry. Hospitals and universities are largely rooted in a specific geographic place. Their direct and ancillary jobs are harder to ship overseas than most. They represent 8.7% of US GDP, so Kelly and Howard have tapped into a potential goldmine of opportunity for geographically based democratic employee owned forms.

In another example, the Cooperative Home Care Associates (CHCA), launched in 1985 provides good work for home health aides. “Workers exercise voice through a union, a labor-management committee, and voting power over 8 of 14 board seats… the work is hard and not high paying. Yet workers stay. CHCA’s turnover rate, at 20 to 25 percent, is less than half the industry average of 66 percent.” (63)

Investors are probably happy to cede low-profit manual labor sectors to worker cooperatives. Almost nine years ago in an interview, Margaret Blair told me that something like “75% of the value of the corporate sector cannot be accounted for in plant and equipment…tangible assets on the books.” Investment in firm-specific human capital is where companies are experiencing the highest returns.

Self-actualization at work and in life depend on meaningful and challenging work. While CHCA helps make largely invisible home health aides “feel visible and valued,” they still aren’t earning incomes that place them much above an average wage. They still may not feel self-actualized at work, although helping people meet their basic needs may be more rewarding than I imagine.

ESOPs and Public Benefit Companies For a Democratic Economy

One case that certainly perked my interest is EA Engineering, an employee-owned public benefit corporation that employs mostly scientists, engineers, planners, information specialists, etc. I can relate to this work in part because for many years I supervised similar teams that developed and reviewed environmental impact reports for many years. My teams included a variety of engineers, planners and scientists, including an anthropologist. These are good paying jobs. EA Engineering was bought using an employee stock ownership plan (ESOP), practices open book management and is organized as public benefit company, a corporate governance form that had not been created 40 years ago when I was promoting employee ownership.

According to Joseph Blasi, Director of the Institute for the Study of Employee Ownership and Profit Sharing at Rutgers University, 6,600 US companies have some form of employee ownership. The average stake for employee owners in an ESOP is $134,000. That compares favorably to the average retirement account of $14,500 held in American households headed by 55-64 year-olds. (84)

The easiest fit for self-actualization within the context of democratic firms might be knowledge-intensive organizations like EA Engineering, made up of “professionals” operating in relative autonomy in resolving known issues and in collaboration with others from complementary fields when addressing complex problems. Advertising, auditing, consulting, engineering, law and scientific research come to mind.

The chapter on sustainability had an interesting proposition. Have the Federal Reserve buy out the oil companies using the same techniques used to rescue the big banks in 2008. Current fossil fuel reserves are five times higher than the carbon that could be burned, still keeping us under the threshold of 2 degrees of warming. Writing down $20 trillion in stranded assets would clearly strain the economy.

The Fed could purchase a 51% stake in the top 25 US publicly traded oil and gas companies for a measly $700 billion to initiate the write down. That is nothing compared to $4-7 trillion spent on the wars in Iraq and Afghanistan but would this end up being another public bailout of rich capitalists? Saving a salubrious environment would, of course, be worthwhile. This creative solution only includes US based companies. See Quantitative Easing for the Planet.

“System-changing issues are on the policy agenda today more than at any time in memory – and whether or not these pass immediately, they start conversations that need starting. (116)

According to Kelly and Howard, “The aim is ownership locally rooted there, and broadly held. Instead of decision making by an absentee elite, power is brought back within the circle of community.” (116) That is fine for many businesses and more should be done on that scale.

However, I am not so sanguine as to believe most large-cap companies can focus on single communities or even countries. Since transcontinental railroads, much of the economy has been based nationally or internationally because large-scale is demanded. It is not practical for each town to have its own railroad to transport goods and people across the country. While I applaud the Democracy Collaborative and its work, I will continue to focus on publicly traded companies, while trying to apply some principles for a democratic economy to their corporate governance.

Most companies already have some experience with self-governance as a natural consequence of flatter organizational structures. Teams frequently share knowledge, debate ideas and share leadership challenges. Plenty of evidence supports the productivity of ESOP structures, combined with participatory decision-making structures throughout the firm.

One big problem I am trying to address is that most public companies are largely “owned” by three or four indexed funds with little emphasis on principles for a democratic economy. They often tout values such as sustainability or gender equality. However, they typically vote their proxies against such values. I am trying to address this values disconnect by asking the SEC to require funds to announce their votes in real-time in machine readable format. Publicity and competition around proxy voting would then help align funds with customer values, which bend toward democracy.

Long before Google and Facebook went public, Charles Handy suggested companies issue two classes of shares – voting shares to be held by members of the corporate community (employees and major advisors). Nonvoting shares could be issued to those less involved, including to short-term investors. (The Hungry Spirit)

It makes sense to put more voting power with those whose talents and work create the real value of a company. After all, if 80% of corporate value is tied up in reputation and intellectual property, which reflects value added by employees, why should stockholders hold the bulk of power to appoint the board and develop or approve major changes in strategy?

Unfortunately, the necessity for leaders to give power to employees is among the greatest barriers to building companies where employees have the rights of citizenship and voice. Most firms, even if they practice flattened hierarchies, do not promote a democratic economy. Companies like Alphabet (Google) and Facebook, which heeded Handy’s call for dual-class shares, have largely taken the form of dictatorships, not democracies.

At least in theory, strong boards with weak, frequently rotating CEOs, should better reflect new ideas and democratic ideals than companies still run entirely by once creative founders, or especially by their progeny. I am still searching for that ideal mix where employees hold maybe 30-40% of the company through a widely held ESOP, while publicly traded shares ensure a large degree of liquidity and entrepreneurial incentive.

The Making of a Democratic Economy also includes an Appendix: “Networks of the Democratic Economy.” Those references should be helpful to anyone trying to build a more democratic economy based on cooperatives, B corporations or more traditional publicly traded companies.