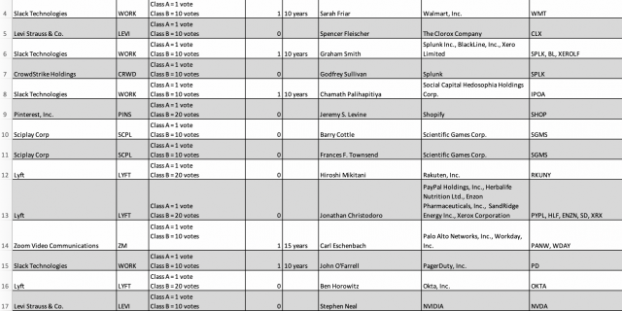 Dual-Class Enablers – CII brings them from shadows to sunlight. Get out your disinfectant (your proxies) and vote against these directors both at dual-class companies (where your vote has little impact) AND at other companies where dual-class enablers also occupy board seats, for now. Print out the list today and use it when voting your proxies.

CII invites members seeking to elevate their engagement on the “one share, one vote” principle to leverage CII’s “Dual-Class Enablers” list (see right-hand column to download), whether as a resource for investor-company dialogue or to consider voting against directors involved in pre-IPO board decisions to embrace dual-class equity structures.

The Dual-Class Enablers list tracks directors of U.S. boards involved in decisions to go public with a dual class structure since 2018.  Directors are excluded from the list to the extent that they ensured the inclusion of a time-based sunset of seven years or less on the structure. The list excludes IPOs valued at less than $200 million, as well as SPACs, FPIs and REITs.

The list provides the names of other public company boards on which those individuals actively serve. The list also includes any time-based sunset provisions in excess of seven years, allowing users to gauge for themelves whether the company has a reasonable path to alignment. The list will be updated on a semi-annual basis, both with respect to new IPOs and board members’ active external directorships.

Unequal structures generally render low-vote shareholders powerless to exert direct accountability on board members who facilitated dual-class structures at the critical juncture of the IPO. However, by voting against or withholding support from these same individuals at other, single-class boards on which they sit, investors can bring some degree of accountability. This voting strategy is not solely about retribution, but also about improving director diligence during the pre-IPO process; widespread adoption of “porting” opposition to other company boards could cause private company directors to more carefully consider all sides of the issue before acceding to founders’ and/or company-retained advisors’ preference for long-term entrenchment.

Since its founding in the 1980s, CII has endorsed the principle of “one share, one vote”: every share of a public company’s common stock should have equal voting rights. The vast majority of U.S. publicly traded companies (about 9 in 10) have a “one share, one vote” structure. Other companies typically have a superior class of common stock with more votes per share than an inferior class, with founders, their families or other insiders holding the superior class. In the first half of 2019, 26% of IPOs (excluding FPIs, SPACs, and REITs) had dual-class structures with unequal voting rights, up from 11% in 2018. For more information on dual-class, see CII’s Dual-Class Stock page.

The list, which will be updated, currently identifies 68 dual-class directors in 2018 and 91 so far for companies that made their IPO in 2019, and excludes companies with IPOs less than $200 million, special-purpose acquisition companies, foreign private issuers and real estate investment trusts…

According to CII, dual-class structures with differential voting rights are becoming more popular with IPO companies, particularly in technology sectors, with 26% in the first half of 2019, up from 11% in 2018. The trend is partially offset by an increasing number of dual-class IPOs with sunset provisions.

The list “may cause directors of private companies that are considering an IPO to think more carefully about the benefits and costs of adopting a dual-class structure,” and directors who serve on nominating committees at single-class companies may think twice about a candidate for board service who was responsible for taking a company public with an open-ended dual-class structure,” Mr. Bertsch said.