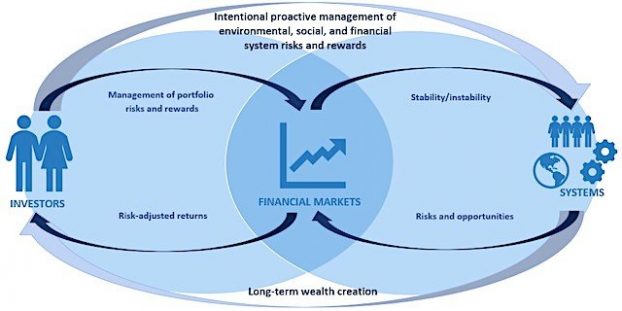 More beta is what investors should focus on order to increase long-term returns, argue Jim Hawley and Jon Lukomnik in their paper, The Long and Short of It: Are We Asking the Right Questions? – Modern Portfolio Theory and Time Horizons (download). That has also been the objective of Corporate Governance (CorpGov.net) since 1995. I am delighted to read scholarly arguments by two giants in the field supporting that perspective.

The heavy shadow of modern portfolio theory (MPT) has had a massive impact on everything from market structure, investment philosophy, and investor behavior, to the research that examines those disciplines…

MPT, as practiced, views systemic risk and return (beta or in the jargon of the investor, “the market”) as exogenous to, and not impacted by, investor decisions and behavior, either by one market actor or by implication (though usually unwritten and typically not considered) groups of market actors…

It is a central point of our argument that while some risks are systemic and non-diversifiable, that does not suggest that they are immune from mitigation.

Now take a quick break. Listen to Breathing new life into modern portfolio theory, a podcast from PRI. That is where I heard Hawley and Lukomnik, before reading the paper. Seeking more beta is a “more impactful way to create value, both in terms of portfolio returns and the economy as a whole” than the current focus on alpha. The authors compare it to the gravitational force of people walking around the globe. If we all walk together, we can have an impact.

More Beta: MPT a Victim of its Own Success

When Markowitz first developed MPT in the 1950s, institutions owned about 8% of US equities. Today, they own 78%. Under fragmented ownership in the 1950s, with each investor making their own individual decisions, no investor or group was large enough to significantly alter beta.

More Beta: Alpha and Beta Are Like Conjoined Twins

Since Markowitz’s time we have seen the rise of huge “super portfolios,” primarily index funds that account for more than a third of the U.S. stock market. They tend to move in the same direction. Indexation, which is not based on the collective wisdom of individual decisions in the market, amplifies the indexing effect first by initial inclusion and then by continuation, largely without regard to performance.

Index funds slowly drifted away from the rest of the market but then created a feedback loop demanding that active fund managers be evaluated based on beating or failing to beat an index unrelated to fundamentals. That feedback loop increases systematic market or beta risk.

Many active investors now simply attempt to control risk in comparison to an index, rather than buy and sell based on fundamentals. This “creates an MPT tautology: the capital linked to the index itself becomes the justification for the index being efficient, thus attracting more capital.”

Hawley and Lukomnik remind us that alpha and beta exist on a continuum. The alpha strategies of early adopters get adopted by most market participants over time and move into the beta category. More interestingly, they posit that “today’s investors are large enough to affect beta directly,” through “intentional beta activism.”

The New York City Comptroller is offered up as an example of moving “the herd” through a campaign that led to more than half of S&P 500 companies adopting proxy access, “changing market standards and therefore beta–not just changing a particular company.”

From my own experience, investors do not have to be “large” to affect beta directly. New York City pensions are big but they are minuscule compared to super portfolios like BlackRock, State Street, Vanguard and Fidelity. Those funds have never initiated changes through the use of proxy proposals. An investor does not need to be large. They only need the vote of investors that are large.

Four small “gadfly” investor families have also increased beta directly. A study of special meeting and written consent rights found that out of 114 sampled firms that granted such powers between 2005–2017, 84% had received a shareholder proposal asking the right to call a special meeting. 90% came from the families of Chevedden, Steiner, McRitchie or Rossi.

Those actions not only improved the long-term value of our companies, they also helped move the entire market by driving what is considered “best practice.” See The Never-Ending Quest for Shareholder Rights: Special Meetings and Written Consent by Emiliano Catan and Marcel Kahan. As Hawley and Lukomnik posit:

The full integration of ESG into investment strategies needs to involve a clear recognition that beta activism offers longer term value creation than benchmarks to beat the market.

The four gadfly families are all long-term investors who are motivated by moving the market to improve long-term returns for all.

Brinson et al. “suggest more than 90% of the variation in return is explained by asset allocation not security selection.” We often think index investing minimizes trading but index funds simply trade on autopilot. Their weightings “are the sum of the active, non-index, alpha-seeking market participants’ trades.”

Short-term alpha-seeking sets the parameters for these beta-trackers. From the market point of view, the index investment does not offset short-term (relative return alpha trading) but may, in fact, amplify it.

Because of our MPT mindset, we usually measure investments as the holding period of individual trades. A better measure is the duration of our exposure to the market, since the market is, on average, much more of an influence on our return than individual trades. Sequential alpha turns out to look a lot like beta.

Hyper-discounting is the seasoning that makes an MPT stew of short- termism even more so. Here is the recipe: Combine the focus on alpha-seeking trading as a way to differentiate a track record and the hyper-discounting of future cash flows in those trades. Allow those hyper- discounted trades to determine the components and weightings of indices. Move lots of money into passive strategies that track those indices, which are, of course, calculated based off those hyper-discounted trades. Then emphasize tracking error against those indices so that even more money is linked to them.

Inclusion in the indexes actually results in companies reducing long-term investment, as they attempt to accommodate new investors focused on the short-term.

Over-discounting the future can have disastrous consequences. The authors cite as an example the US government’s use of a 3% discount rate on the social cost of carbon, resulting in an implied cost of carbon emissions of $36 a ton. Increasing the discount rate to 5% would reduce that cost to $11 a ton. A member of the Trump environmental transition team suggested 7%, which would result in “a dead planet rate of about a dollar.”

Our current temporal measures assume that alpha-seeking is the dominant driver of investment decisions, despite the fact that beta has more impact on investment risk and return.

Traditional temporal measures are not useful to illustrate the realities of today’s investment world, which is some combination of alpha-seeking, beta-matching, and alpha–beta feedback loops. For instance, holding period is not a helpful metric in understanding the duration of a series of sequential alpha trades resulting in quasi-permanent beta exposure. Nor do they illuminate the specific time periods of beta exposure created by those sequential trades that aggregate alpha-seeking trades into semi-permanent beta exposures…

An even more difficult job will be to find temporal measures relative to the feedback loops between an investor’s, or group of investors’, portfolio investment and the resultant effect on beta, whether that effect is intentional or incidental. This type of question is an important element in the work of The Investment Integration Project.

The authors close with a statement about reconceptualizing the role of finance “as an intermediary to rationally foster and facilitate non-financial capital investment, unaffected by either the blind spots of MPT or the tendency to hyper-discount long-term investment returns.” That would be worthwhile theory, shovel ready for practice.

I look forward to reading the book, which Hawley and Lukomnik are currently working on with Routledge. My suggested title is More Beta: 21st Century Portfolio Theory. Send me your suggestions; I will pass them on.