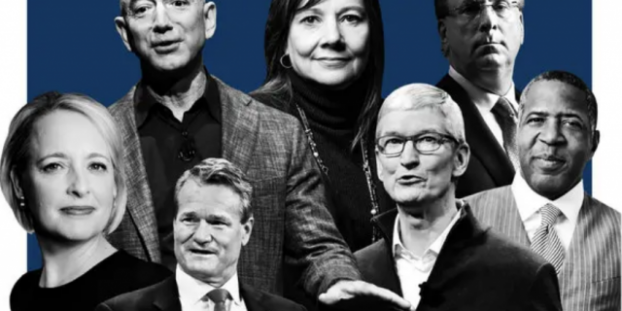 My letter to Business Roundtable (BRT) on shareholder resolutions is reprinted below. There has been no response so far. If their pledge to stakeholders was really in earnest, maybe they will now be more open to negotiation on ESG issues than they were when we testified to the SEC at cross purposes.

The BRT has complained about Chevedden, McRitchie, and Steiner:

[T]he same three individuals and their families submitted or co-filed over 24 percent of all shareholder proposals each year at Russell 3000 companies.

The low stock ownership requirement and the option of making proposals by proxy combine with other aspects of the shareholder proposal process to enable many proponents to submit proposals that are not relevant to shareholders at large, simultaneously at a host of companies.

However, as I reported, my proposals averaged majority support and those of Chevedden and Steiner also won substantial support. They are certainly “relevant to shareholders at large.” Silencing small shareholders is exactly the opposite of what the Business Roundtable should be advocating. Small shareholders are disappearing already.

The issue of “proposals by proxy” is an old canard. There is no rule and it is not unreasonable for shareholders to act as each other’s agents to handle various aspects of the shareholder proposal process. Corporations certainly have their agents, such as outside counsel.

As long as 84% of corporate stock is owned and controlled by 10% of Americans, corporations will not be trusted. For capitalism to be compatible with democracy and considered legitimate, we need most American families to participate in share ownership. That should be  the mission of the Business Roundtable, every corporate director, and the SEC.

Imagine if most Americans had a substantive stake, as well as a meaningful voice in corporate governance. Imagine if investing in shares was promoted as a way to participate in financial returns and in voting on what future we want to live in based on each company’s “social purpose,” as Larry Fink of BlackRock has called it.

Creating a nation of small shareholders involved in corporate governance would be transformative. We will never get there by stripping small shareholders of their rights. That would be The Road to Serfdom with no accountability. Perhaps members of the BRT are looking for a free rein, unencumbered by answering to shareholders? See the following from Nell Minow: More on the CEO Stakeholder Pledge: VEA Vice Chair on Fox Business and Six Reasons We Don’t Trust the New “Stakeholder” Promise from the Business Roundtable.

I have had an opportunity to read your various statements and letters to the SEC related to shareholder resolutions. And of course had an opportunity to hear Ms. Ghazal speak at the SEC November Roundtable where I also presented. Your public comments and letters consistently critique shareholder resolutions whether submitted by individual or institutional investors. Your BRT June 3 letter to the SEC is one recent example.  The message is that many of the issues raised via resolutions are frivolous or unrelated to a company’s business and the creation of shareholder value.

As you know we strongly disagree.  We also find the research on which you base your analysis and commentary to be flawed and inaccurate.

I recently published a summary of the results and impact of the resolutions I and John Chevedden led this past proxy season. As you can see although we are small individual investors, our resolutions often did very well and also resulted in positive changes in governance by many companies. (see below, attached or view at https://www.corpgov.net/2019/08/mcritchie-2019-proxy-season-win-for-market-beta/)

I submit this to you in the hopes that you will study it and change the narrative you have been using as you describe the actions taken by investors who are active owners.

I look forward to hearing your response.

McRitchie 2019 proxy season results are not something I normally report. It feels too much like bragging. I do my work to drive better, more accountable corporate governance. However, the SEC’s Division of Corporate Finance is “considering recommending that the Commission propose rule amendments regarding the thresholds for shareholder proposals under Rule 14a-8.”

It is widely reported the SEC rule proposals will include increasing the ownership and resubmission thresholds for Rule 14a-8 shareholder proposals to discourage participation by retail shareholders. I have long seen salvation for the economy in the opposite direction, encouraging and empowering main street investors. Therefore, it is time to set the record straight that my proposals, like the proposals of Chevedden and Steiner, are often widely supported.

The argument from those who want to reduce democratic corporate governance seems to be that low thresholds for submitting and resubmitting shareholder proposals allow a few shareholders to impose on companies their personal policy priorities, with costs borne by all shareholders, most of whom do not support those proposals. In 2017, Chair Clayton indicated the SEC would review shareholder proposal rules, noting it is “very important to ask ourselves how much of a cost there is….how much costs should the quiet shareholder, the ordinary shareholder, bear for idiosyncratic interests of other [investors].”

As can be seen in the table below, my proposals averaged 52.3% support this proxy season. I am exactly the type of shareholder targeted by the rulemaking under consideration – a small retail investor. If my submissions were really  “idiosyncratic,” why do they win the votes of so many shares?

One Response to My Letter to Business Roundtable on Shareholder Resolutions