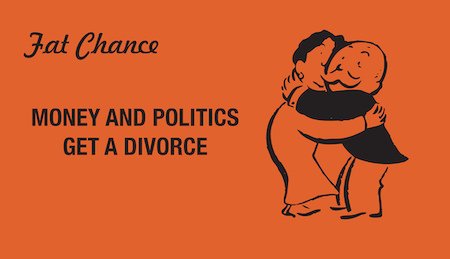 Money and Politics Get a Divorce. That would be a nice headline. It has been more than ten years since the US Supreme Court held that corporations could spend unlimited  funds on election campaigns in their decision, Citizens United v. Federal Election Commission.

Money and Politics Get a Divorce: Still Waiting

It also said that disclosure

And the court expressed enthusiasm that technology today makes disclosure “rapid and informative.” Yet, corporations are not required to make the disclosures to shareowners as Justice Kennedy seems to have believed. More than a million Americans have asked the SEC to require corporations to make such disclosures. See Investors Seek Disclosure of Corporate Lobbying Expenses.

How can we, as shareowners, hold corporate managers accountable when we do not know what candidates or measures they are supporting? The vast majority of Americans do not hold stock directly. Instead, most of our investments are held by mutual and ETF funds, often in deferred compensation plans where we do not even see how shares held by our investments are voted in corporate elections. That is why I proposed new rules requiring real-time disclosure in a user-friendly format. To ensure our shares are voted in alignment with our values, we must first know how they are voted.

Know How Investments are Voted

The current annual N-PX proxy reporting requirements, promulgated before widespread use of the internet, obfuscate the ability of investors to compare funds based on voting records. Compare the sortable voluntary disclosure of Trillium Asset Management, which often includes voting rationale, with the mandated disclosure of the Vanguard Index Trust Total Stock Market Index Fund, which requires a laborious effort to decipher.

Requiring N-PX filings in real-time and in a sortable format would drive discussion and the demand for more companies to disclose political and lobbying expenses. See my rulemaking proposal File 4-748, Report of proxy voting record.

Even without having such direct information, YourStake.org can help investors make a difference by sending strong messages to the funds where our investments are held. Here is an example of one petition campaign at YourStake.org.

Fossil fuel companies exert a great deal of influence over climate and energy policy at the federal, state, local and international levels – yet much of this influence occurs behind closed doors. Big corporations like ExxonMobil and Chevron can get away with spending nearly unlimited amounts lobbying for policies that benefit them at the expense of the public and the planet without voters, customers, or shareholders even knowing.

Weak disclosure requirements restrict the amount of information that is publicly available about companies’ political activities, especially when it comes to their payments to third-party groups that lobby for harmful policies on their behalf. This allows Big Oil companies to maintain rosy public images while blocking climate action behind the scenes.

For example, ExxonMobil, Chevron, BP, and Shell were lauded last year for committing to “advocate sound policy and regulations on methane” when they signed on to a set of guiding principles designed to curb methane emissions. At the same time, the American Petroleum Institute, a trade association led and funded by those same companies, is lobbying for the EPA to weaken methane rules.

Shareholders are fighting back against deceptive lobbying practices by putting forth resolutions demanding that companies disclose their political spending. However, major mutual funds like Vanguard, BlackRock, and Fidelity, which have sway over big companies because they manage millions of our retirement dollars, allow fossil fuel companies to continue hiding behind industry groups and third-party lobbyists by refusing to support these resolutions.

Last year, Chevron and ExxonMobil shareholders voted on resolutions to require stronger lobbying disclosure, winning 31 and 26 percent of the vote, respectively – even without the support of large mutual funds. With shareholders like Fidelity, Vanguard, and Blackrock supporting proposals like these, we could win.

There is growing pressure on mutual funds to support resolutions to fight dark money in politics.