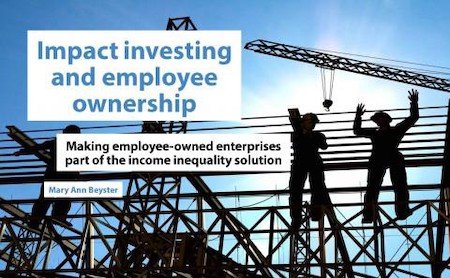 Investing in employee ownership could be a smart strategy for individual investors and would certainly be good for society. As I mentioned recently, I was delighted to see investing in employee ownership as a major topic of discussion at the recent SHARE Summit 2020 in Vancouver. At that conference, Ted Howard outlined principles for a democratic economy. In his book with Marjorie Kelly, The Making of a Democratic Economy discussed how the Fund for Employee Ownership aims to purchase privately held companies and convert them to employee ownership. Investment Banker Dick May of American Working Capital suggests that $100B in federal loan guarantees could support creation of 13 million new employee owners in a decade.  I hope that makes it into Joe Biden’s platform.

Also at #SHARE2020, I learned NCEO had created the Employee Ownership Index, which has been implemented only by a firm named motif. Find the index on their website under Employee Ownership Index. According to motif, the index was last updated on 6/28/2018, so I am concerned it has not been updated and rebalanced to reflect more recent national employer rating awards on employee engagement (Fortune’s 100 Best Companies to Work For and its 100 Best Medium Workplaces, the Gallup Engagement Index, and the Enterprise Engagement Alliance awards).

NCEO’s site says the index was reset in June of 2019 to reflect current winners. Maybe motif has failed to update? Perhaps if more people invest in that motif, they will do more to keep it up to date. I see individual investors can customize their Employee Ownership Index by raising or lowering the proportion of dollars going into each company comprising the index. I wonder what happens if/when motif updates the index. Maybe current investments continue but future investments would reflect any such changes. I invested a small amount in the index through motif and hope readers will do the same.

Former Chief Justice of the Delaware Supreme Court Leo Strine has called on investors to expand traditional ESG (environmental, social and governance) concerns to include company employees. Add an E to make EESG. Strine argues investors should align their voting policies with the interests of worker-investors who need not just sustainable corporate profits but also good jobs, clean air and safe products. Strine is not a democratic socialist, as far as I know, but in Toward Fair and Sustainable Capitalism calls for:

Strine has many good ideas but also proposes much more stringent requirements with regard to shareholder proposals… a very bad idea that would stall forward movement on many ESG issues, including political disclosure and employee representation on boards – two things he seems to care about.

Jackie Cook, who has done substantial work for SHARE in the past and who I visited during my recent trip, recently quoted Strine: “99 per cent of Americans owe most of their wealth to their jobs” [they] “… do not benefit when some companies offload the costs of their activities, such as pollution and carbon emissions, on to everyone else.” She notes the UK’s revised, and globally influential, stewardship code: “… asset owners and asset managers play an important role as guardians of market integrity and in working to minimise systemic risks as well as being stewards of the investments in their portfolios.” (How Can Fund Providers Protect the Future for Worker-Investors?)

Cook has done more than anyone recently to document fund voting records. Fund votes must be disclosed, but as I wrote previously, disclosures are dated and written an obscure codes that require a great deal of analysis by folks like Jackie Cook at Morningstar and others at Proxy Insight. According to Cook:

Across 55 large fund families with more than $17 trillion in assets, shareholder-proposed sustainability resolutions were supported 44% of the time, up from 26% in 2015 and increasing by 7 percentage points in each of the last two proxy seasons.

Passive fund providers competing on price can differentiate their offerings through stewardship. Active fund providers competing with passive providers can offer informed and strategic ESG stewardship to achieve impact… If large asset managers disagree with the specifics of most shareholder resolutions up for vote, they could file their own. One well-placed resolution filed by one of the largest three asset managers, calling on a large and reticent oil and gas company to provide a TCFD-aligned climate report, would likely be a tipping point for corporate climate risk transparency.

Yes, that would be a game changer, since none of the largest funds have ever filed a single shareholder proposal. Much more likely, however, there will be a slight change in voting behavior. Even that could make a big difference. According to Cook, “In a significant number of cases, a vote by just one large asset manager would have tipped the outcome on a resolution to a majority vote for the motion.” (ESG Proxy Resolutions Find More Support in 2019: But large fund companies often block their path)

The Fifty by Fifty Initiative

Employee ownership requires new investment to get to scale. Mary Ann Beyster, president and trustee of the Foundation for Enterprise Development (FED), published a report through the Fifty by Fifty initiative of The Democracy Collaborative (co-founder Ted Howard presented at SHARE2020), which examines the investing landscape for potential opportunities in employee ownership. Download the report, Impact Investing and Employee Ownership. Employee ownership should be more widely embraced by impact investors such as geographically specific foundations, union and pension funds because investing in employee ownership concentrates and multiplies money into local economies. Employee ownership fosters more democratic and ecological thinking and processes. (See The Participatory Economy and The Social Economy) 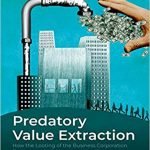 There is a long-standing myth that shareholders create productive assets through their investments. We have a legitimate claim to corporate profits because we are the only actors who make a productive contribution without a guaranteed return. However, these assumptions are deeply flawed. Most stock is purchased in the secondary market; no funds are allocated to the company for investment. We regard to having the only legitimate claim on profits, employees also make firm specfic investments with their “human capital.” They learn company specific issues, apply their efforts and pin their hopes on future promotions or at least sustainability. Of course, taxpayers also invest in companies. Sometimes they do so directly through tax abatments aimed at attracting a manufacturing plant, wharehouse or office. Other times we do so by sharing publicly funded research. For example, from 1938 to 2018 the National Institutes of Health spent $1 trillion on life-science research. Of course, taxpayers have also funded roads, airports, ports and the internet that help to transport the goods and services corporations create. (Predatory Value Extraction)

I suspect the Business Rountable’s announcement in favor of stakeholders was largely cover for their attacks on the ability of shareholders and proxy advisors through SEC proposed rules to hold CEOs and entrenched board accountable. As Lucian Bebchuk notes in The Illusory Promise of Stakeholder Governance, the system the BRT seeks is illusionary.

However, investing in employee ownership directly, through funds like the Employee Ownership Index offered by motif and by empowering employees with information concerning how their retirement investments are being voted could help facilitate the spread of share ownership to employees and could give voice to employees as shareholders. Are votes made on th worker’s behalf aligned with their values? I have argued elsewhere, alignment is unlikely to happen until funds are required to disclose their in real-time and in a user-friendly manner. So far, there has not been even a single comment posted to the SEC site in favor of my petition, SEC File 4-748, Jul. 9, 2019. Yes, filing a comment would take a few minutes. If you have the time, yours could be the first.