SHARE Summit 2020 was a first for me. I had never attended a conference put on by Canada’s Shareholder Association for Research and Education. I encourage Americans to learn from our northern neighbors. Next year’s Summit will be in Toronto, so may be more accsssible to most readers than this year’s in Vancouver. 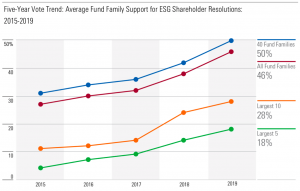 Vancouver has one of the most beautuful settings of any city in the world. I started by sharing bunch on Granville Island with Mark Latham, who wrote my first proxy proposal 20 years ago, and Jackie Cook, who is doing the most important research in corporate governance by calling out funds with hypocritical voting records on ESG issues. (see chart on right)

Mark and I moved on to pickelball in Stanley Park and a hike on the next day up Grouse Mountain before the Summit. 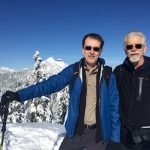 Canadians seem more concerned with solidarity than selfishness. Drivers stopped their cars well behind crosswalks. People seem less hurried and harried. Smiling and politeness were the norm. The social benefits in Canada appear to extend far beyond healthcare, education and nicer public amenities. Average wealth in the US is considerably higher, $432,365 v $294,255 but distribution is broader in Canada with median wealth of $107,004 v $65,904 in the US.

SHARE Summit 2020 opened each day with a statement acknowledging it was being held on unceded land of the Musqueam, Squamish and Tsleil-Waututh First Nations. Then we heard from a tribal leader about the importance of thinking in terms of many generations. Canada began its Truth and Reconcillation Commission in 2008. I have not witnessed anything similar in the large number of investor conferences I have attended in the States. There were many sessions focused on the concerns of first nations people, as well as on employee ownership. Another difference was a much more international perspective. Canadians appear much more willing to learn from and cooperate with others around the globe.

Several pre-summit classes were offered. I signed up for the Trustee Responsible Investment Master Class, hoping to get some tips to apply in my role on the investment committee of the California State Retirees (CSR). We advise on how to invest CSR’s $3M in assets and apply lessons learned as we attempt to influence our $370B pension fund, CalPERS.

True to a more international perspective, the workshop began by describing key 2019 developments in the field of responsible investment beginning with the EU Sustainable Finance Taxonomy. There was also good discussion around the Global Impact Investing Network (GIIN). While many have been making impact investments for decades, recently there have been more collaborative efforts to build scale, measurement and efficiencies. Asset manager oversight is no longer considered as largely apart from granting activities. Many foundations are moving from 10% impact and responsible investing to total porfolio activation, including shareholder and policy engagemant. Granting missions and investment strategies are converging. Donor additudes are changing with intergenerations transfers to millennials and women, whose values are more aligned with such an approach. Download a Guidebook. View sample investing policies, strategies and guides.

One especially useful shared document was the Hamilton Community Foundation investment policy. Some of the best information from workshops is just hearing the stories of others, how they struggled through some of the problems you may be facing and learning who to connect with that might be helpful. We heard quite a bit from Coast Funds about linking ecology to prosperity, moving from raw material extraction to adding value by finishing products within the community. I was happy to learn they recently took control of their proxy voting rights for better values alignment.

Another  focus was on the 17 SDGs. How are we measuring the impact in each pillar? The Atkinson Foundation was held up as an example of what to consider in evaluating companies with respect to supply chains, human rights, worker ownership, etc. through their workforce disclosure initiative.

This is one of the reasons I decided to attend the Summit. I know of no other conference primarly focused on public equities where the featured speaker discussed worker ownership and worker cooperatives. I have reviewed Ted Howard’s book The Making of a Democratic Economy elsewhere and highly recommend it.

Marjorie Kelly and Ted Howard outline seven principles for a democratic economy, then devote a chapter to each principle.

One of many resources that came up during the panel discussion that followed was the Global Alliance for Banking on Values, an independent internatioal network of banks using finance to deliver sustainable economic, social and environmental development. Although often seen by the uninformed as risky, values-based banks did not fall off a cliff during the 2008 financial crisis.

Howard called us to shift from charity to democratic development. Financing good does not have to come with a loss. One of the panelist noted that after Pearl Harbor, America stopped producing automobiles in two months so that we could regear the economy to defeat racism. We need the same kind of mobilization to address the climate crisis. Additionally, there was disucsion of worker control, workers on boards, unions, government ownership of critical activities, engaging in democracy, etc. I was reminded of Jaroslav Vanek’s The Participatory Economy and Paul Bernstein’s Workplace Democratization. Now is a time to dream big. Be brave; be courageous, Howard concluded.

In a broad ranging discussion about climate risk litigation, I learned of the Sabin Center at Columbia Law, aimed at fighting climate change. One case discussed was a  class-action lawsuit against Exxon. They were accused of misleading shareholders about the risks it faces from climate regulation. Interesting to me was that one of their problematic reports was issued cited in the lawsuit was generated to get a shareholder proposal withdrawn. Exxon won the case but similar lawsuits continue to proliferate. Summit attendees were warned to consider the impact of climate when making asset allocations. Meat might be another sector soon facing liability. Also discussed was having workers on boards and the fact that BlackRock opposed loyalty shares (those held long-term would recieve more votes) in the UK, since BlackRock could end up with  a majority of the votes. They want to be in the business of investing in companies, not running them.

On an0ther panel, one speaker remarked, “This conference is different. There’s not the smugness. I can talk about my values and they don’t have to be subservient to returns.” We need to rethink the economy. With 60% of world working informally, the social contract has been torn apart. Inequality and the climate crisis are linked. Democratic spaces are closing and people are losing hope in democracy. We need a new social contract, a social floor, global rule of law and rights. We need a just transition for climate, fair taxation, vital public services, full employment, rights of women, due diligence, grievance procedures, UN guiding principles, anti-slavery. Yes, I’m stringing a lot of words together but they all point towards justice.

EU directives will be game changing. Rights must be enshrined in the WTO. Multilateralism is in crisis. EU puts just transition at the heart of it. We must climate proof the workplace. Young people are not sure democracy is the system they want. Trust can only be restored if voices are heard.  Most panelists agreed on most issues, but as I sat around tables, there were quite a few union pension fund trustees representing workers in extractive industries. Many were not eager to move from high paying oil sands jobs to much lower paid solar panel installers. Investing in a just economy is easier than being a worker in transition. 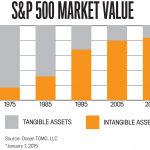 Financial theory was built around the idea that investing is neutral. People invest to make money, then put it to use, including through charitable contributions. It is increasingly recognized that investing is a value laden activity. Inequality is a systemic risk to our economy and to democracy. Intangibles, as a share of market value were 17% in 1975, 84% in 2015. In this increasingly intangible economy, the people who create value are not benefiting as much as they should.

Employee owned companies are mostly privately held. They grow faster, are more productive, suffer fewer layoffs and perform better under almost all other positive measures.  Although most a private, in 2017, NCEO created the Employee Ownership Index, an index of 28 publicly traded companies that both have broad-based employee ownership. Each company has also won one of four major national employer rating awards on employee engagement (Fortune’s 100 Best Companies to Work For and its 100 Best Medium Workplaces, the Gallup Engagement Index, and the Enterprise Engagement Alliance awards). The index was reset in 2018 and again in June of 2019 to reflect current winners. It now has 29 companies. The only company offering the index at this time is motif. I am going to put a small investment in the fund. I studied worker ownership under a grant from the National Institute of Mental Health and headed California’s Cooperative Development Program. In both roles I found more widespread employee ownership could help solve a litney of problems.

According to one panelistst, millennials in worker owned companyes had 93% more wealth. Wages and profits stay more invested in the local economy. They have lower default rates. Pay is more equitably distributed. They have smilar rates of unionization. In the US, they are incentivized through tax incentives but the small cost in taxes generates more stable employment. Government gets more in payroll taxes, pays less in unemployment. The biggest obstacle is lack of awareness. Bill Young, President of Social Capital Partners, claimed his Employee Ownership Capital Initiative is earning investors 12% annual returns. If true, it would seem to be a great vehicle for many types of funds to invest in for better alignment with their values.

The above remarks just scratch the surface of what I learned at the SHARE Summit 2020.  I not only learned about what is going on in Canada, in the EU, Australia, etc. but also found out what is happening in my own neighborhood.  I am going to have to connect to the California Trustees Network, with several people I met and with many organizations.

I liked the interactive workshops and exercises. I with I could have cloned myself to keep up with concurrent programs. To learn more about the Summit, read A World Out of Balance, the opening address by Sharan Burrow, General Secretary of the International Trade Union Confederation, the world’s peak labour union body representing 207 million workers in 163 countries and territories with 331 national affiliates. Also, search #SHARE2020 and #ThePowerOfMany on Twitter. If you attended the Summit and have something to add, please do so in the comment box below.

While all the speakers and panelists were top notch, I was most impressed with our host, SHARE. There is truly nothing like this organization in the States. SHARE provides an abundance of services to its members at what very reasonable prices. Shareholder engagement, proxy voting, and policy research, name just a few. Want to find out who filed what shareholder proposals at Canadian companies? Try SHARE’s Shareholder Proposal Search. I am so glad to attend the Summit and I was there for a small celebration of SHARE’s 2oth anniversary. Special thanks to Kevin Thomas, Peter Chapman, Sherry Lipp, Shannon Rohan, Damon van der Linde and all the other SHARE staff who helped make the SHARE Summit 2020 so great.

Money and Politics Get a Divorce
Investing in Employee Ownership: More from SHARE2020