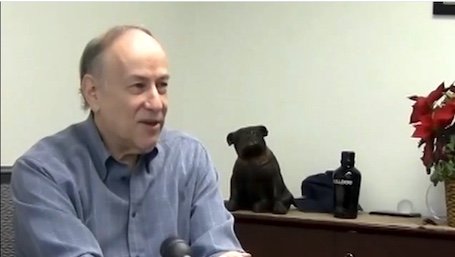 Skadden scheme exposed by Phil Goldstein, of Bulldog Investors, threatens to kill shareholder rights. While we were fighting COVID-19 and new rules proposed by the SEC to eviscerate shareholder rights Skadden, Arps, Slate, Meagher & Flom LLP has been plotting to effectively do away with the right of shareholders to have their Rule 14a-8 proposals appear on proxies.

The Skadden scheme relies on the ability of corporate directors to adopt a bylaw or other measure to prohibit shareholders from voting on any proposal, other than those that statutorily require a shareholder vote. Additionally, the Skadden scheme locks out most potential board challenges,  without adopting a poison pill, the Skadden scheme requires that, in a competitive election, candidates are required to obtain a supermajorithy of not just the votes but of the theoretically possible votes of all outstanding shares. In the likely event neither candidate receives the required supermajority vote, incumbents can easily be favored over challengers and reappointed.

According to a no-action request and response, the following resolution was filed at the Dividend & Income (DNI) Fund:

RESOLVED: The Fund’s rigged election bylaw should be replaced with the following one: “The nominees that receive the most votes cast at a meeting at which a quorum is present shall be elected as Trustees.”

The supporting statement reads, at least in part, as follows:

The Fund’s Trustees have adopted a voting requirement that provides that, unless they run unopposed, “the affirmative vote of the holders of at least 75% of the outstanding Shares of the Trust entitled to be voted shall be required to elect a Trustee.” On the other hand, if the incumbent Trustees run unopposed, they only need one vote to be elected. To illustrate how that requirement rigs elections in favor of the incumbent Trustees, consider that at the Fund’s last annual meeting, fewer than 40% of the outstanding shares (excluding shares voted by brokers on routine matters) were actually voted. Thus, in any election for Trustees in which shareholders have a choice of nominees, it is almost certain than no Trustees will be elected. The result would then be a so-called “failed election” which would leave the incumbent Trustees in their positions as “holdover” (or unelected) Trustees – even if they receive fewer votes than their opponents.

That is patently unfair and makes a mockery of the word “election” which is supposed to be a means to allow voters to choose the persons they want to represent them. Sham elections may occur in dictatorships like Cuba or Venezuela but they are prohibited in the United States of America. In this country, the incumbent office holders may not adopt election requirements that virtually guarantee they can never lose an election. Therefore, the rigged election bylaw should be replaced with the following one: “The nominees that receive the most votes cast at a meeting at which a quorum is present shall be elected as Trustees.”

The request and response has not been posted to the SEC’s incoming no-action requests page. The request may have been sent to the Division of Investment Management (DIM) rather than Corporation Finance. DIM does not publish incoming no action requests but does appear to publish decisions.

Is it Just Maryland?

Phil Goldstein notes the following in a year end report of the Special Opportunities Fund:

We think the SEC should investigate whether registering funds in a sanctuary state like Maryland is consistent with the fiduciary duty required by the Investment Company Act of 1940, which was adopted precisely because Congress felt that states could not be trusted to protect investors. Indeed, the very first section of the ICA states that it is intended to deter or prevent fund insiders from self- dealing, i.e., organizing, operating, or managing funds in their own interest rather than in the interest of investors. Since the very purpose of an election is to allow investors to decide for themselves what is in their interest, it is sad that the SEC has stood by while fund managements adopt measures to weaken shareholder democracy. They likely see the SEC as a paper tiger and that encourages them to continue to push the envelope. Consequently, on December 2, 2019, we submitted a letter to the SEC asking whether these sorts of antitakeover measures violated the ICA.

Are other states more protective of shareholder rights?

Skadden Scheme: DNI the Not First

Skadden cites several “no action” letters issued by the Staff of the Division of Corporation Finance (“the Staff”). It appears that the first time this argument was presented was RAIT Financial Trust (March 10, 2017). Staff simply stated:

There appears to be some basis for your view that RAIT may exclude the proposal under rule 14a-8(b). You represent that the proponent holds securities that are entitled to vote only on certain matters, which do not include the subject of this proposal. Rule 14a-8(b) requires that in order to be eligible to have a proposal included in a company’s proxy materials, a shareholder must hold “securities entitled to be voted on the proposal.” Accordingly, we will not recommend enforcement action to the Commission if RAIT omits the proposal from its proxy materials in reliance on rule 14a-8(b).

That apparent “some basis” was RAIT’s contention that its Declaration of Trust prohibited shareholders from voting on any shareholder proposal, binding or precatory, “unless the matters covered by the proposal are among the enumerated matters specifically described in the Declaration of Trust or the Board was to declare a proposed action as being advisable and, in its sole discretion, direct that the matter be submitted to the shareholders for approval or ratification.”

A few months later, Skadden, apparently seeing an opportunity to aid companies that wished to opt out of Rule 14a-8, submitted two letters on behalf of issuers requesting no action relief in connection with Rule 14a-8 proposals: Government Properties Income Trust (February 20, 2018) and Senior Housing Properties Trust (February 20, 2018). In both instances, Skadden’s letters piggybacked on RAIT Financial Trust and the Staff concurred with Skadden.

Notice that all cases to date have involved trusts. Is there something unique to trusts that makes them more likely to embrace this entrenchment tactic?

As Phillip Goldstein of Bulldog Investors notes in his recent Harvard blog post, Can a Public Company Effectively Opt Out of Rule 14a-8?

Allowing each company to determine what proposals shareholders can vote upon (other than those legally requiring a vote by shareholders)—and, hence, under Rule 14a-8, rendering them excludable from its proxy materials could make the rule an empty shell.

There is much wrong with capitalism today, but excluding the participation of shareholders in corporate governance is not the answer. To avoid an economy and a political system dominated by the tyrany of the few, we need more inclusiveness, not less. Instead of excluding shareholders from corporate governance, we need to broaden the base of ownership and better incorporate their voices, as well as those of workers and other stakeholders. If it spreads, the Skadden Scheme will be like a virus, eviscerating the voice of shareholders from our economy. We must isolate, treat and vaccinate.

The interview makes no mention of the Skadden Scheme but provides readers with a little more background on Phil Goldstein.

MPT – Why Investors Might be Climate Allies: Corporate Governance Today
Kokkinis and Sergakis: Employee Participation in UK Companies – Lessons for US

One Response to Skadden Scheme Exposed by Phil Goldstein