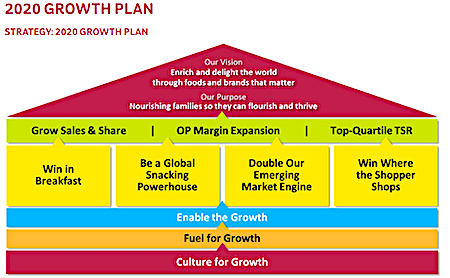 Kellogg 2020 annual meeting is 4/24/2020. To enhance long-term value: Vote AGAINST Steve Cahillane, Richard Dreiling, Exec Compensation, and Auditor. Vote FOR Employee Stock Ownership Plan, Declassify Board and Simply Majority Vote Standard. Warning: Don’t skip this vote. The affirmative vote of holders representing at least two-thirds of the voting power of outstanding common stock is necessary for approval of the amendment to the Certificate of Incorporation to declassify the Board of Directors (item 5). Virtual meeting link. List of all virtual meetings kept by ISS.

Kellogg Company (K), manufactures and markets ready-to-eat cereal and convenience foods. Reading through 85 pages of the proxy takes too much time. Your vote could be crucial. Below, how I voted and why.

From the Yahoo Finance profile: Kellogg Company’s ISS Governance QualityScore as of December 4, 2019 is 7. The pillar scores are Audit: 1; Board: 6; Shareholder Rights: 9; Compensation: 2. Corporate governance scores courtesy of Institutional Shareholder Services (ISS). Scores indicate decile rank relative to index or region. A decile score of 1 indicates lower governance risk, while a 10 indicates higher governance risk. We need to pay close attention to Shareholder Rights and the Board. Sustainability scores are about average.

Kellogg 2020 Summary Compensation Table shows the highest paid named executive officer (NEO) was CEO/Chair Steve Cahillane at $9.7. I’m using Yahoo! Finance to determine market cap ($22B) and I define large-cap as $10B, mid-cap as $2-10B, and small-cap as less than $2B. Kellogg is a large-cap company.

This Company has earned a grade of Needs Attention in compensation and thus, has failed to pass our quantitative tests. From looking at those measures, it appears the CEO failed to create positive value, so pay is not aligned with value creations

Given poor long-term performance, I voted AGAINST.

An Employee Stock Purchase Plan or (ESPP) can be an important tool increasing ownership and productivity among company employees. The tax advantages of a qualified plan are compelling. Egan-Jones supports the establishment of such qualified ESPPs unless there is a compelling example of prior abuse or significant reason to expect such abuse in the future.

This is a board sponsored good governance proposal, very likely submitted to shareholders to ratify our advisory proposal on this topic, which won more than 60% of the vote last year. The affirmative vote of holders representing at least two-thirds of the voting power of outstanding common stock is necessary for approval of the amendment to the Certificate of Incorporation to declassify the Board of Directors. Therefore, if you only vote one item, this should be it. E-J also recommends FOR.

This good governance proposal, which requires unopposed directors to be elected by a majority of the vote, comes from me. Of course I voted FOR. Supermajority requirements are used to block initiatives supported by most shareowners but opposed by a status quo management. The majority of S&P 500 and S&P 1500 companies have no supermajority voting requirements. E-J also recommends FOR.

Proxy Insight had only reported any votes as of when I last checked. They may have updated by the time I post this. Everence voted for all items. CBIS voted for all but auditor.

Looking up a few funds announcing votes in advance, New York City Comptroller and Praxis voted FOR all items.

One Response to Kellogg 2020 Proxy Votes