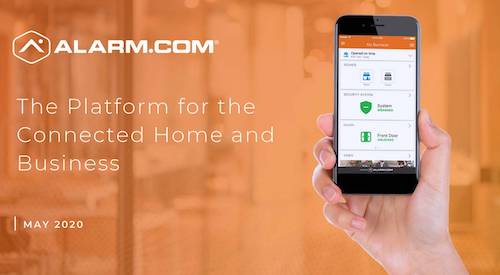 Alarm.com 2020 annual meeting is 6/3/2020 at 6AM Pacific virtually. To enhance long-term value: Vote FOR both directors, Pay, Elect Each Director Annually, End Supermajority Requirements.  Vote AGAINST Auditor. See list of all virtual-only meetings maintained by ISS. Be sure to vote by 6/2 to have your vote count. Voting at the meeting or even asking questions looks nearly impossible.

Alarm.com Holdings, Inc. provides cloud-based software platform solutions for smart residential and commercial properties in the United States and internationally. Reading through the proxy takes too much time for most. Your vote could be crucial. Below, how I voted and why.

From the Yahoo Finance profile: Alarm.com Holdings, Inc.’s ISS Governance QualityScore as of December 5, 2019 is 8. The pillar scores are Audit: 2; Board: 8; Shareholder Rights: 8; Compensation: 9. Corporate governance scores courtesy of Institutional Shareholder Services (ISS). Scores indicate decile rank relative to index or region. A decile score of 1 indicates lower governance risk, while a 10 indicates higher governance risk. We need to pay close attention to the Board, Shareholder Rights, and Compensation.

Egan-Jones Proxy Services recommends For all directors. Due to the classified board, only two are up for reelection this year.

I have no reason to believe the auditor engaged in poor accounting practices or has a conflict of interest. Egan-Jones recommends voting against the auditor if they served for seven years. Independence becomes compromised by that time. PricewaterhouseCoopers LLP has served more than seven years. No other issues appear significant.

Alarm.com 2020 Summary Compensation Table shows the highest paid named executive officer (NEO) was CEO Stephen Trundle at $3M. I’m using Yahoo! Finance to determine market cap ($2.3B and I define large-cap as $10B, mid-cap as $2-10B, and small-cap as less than $2B. Alarm.com is a borderline small-cap company.

Given below median pay, mixed performance and E-J recommendation, I voted FOR.

As a result of my proposal on this topic winning 65% of the vote last year, the board is including this proposal to ratify that vote. Because of existing supermajority provisions, 66.67% is needed for passage… and that is not 66.67% of votes cast but of all eligible stock. That seems unlikely, unless the board makes an effort to get out the vote. Additionally, it seems very odd to me to place this on the ballot below a current shareholder proposal (although I have grouped it here with Board proposals).

This good governance proposal from me (James McRitchie) asks that our Company reorganize the Board of Directors into one class with each director subject to election each year for a one-year term.
Almost 90% of S&P 500 and Fortune 500 companies, worth more than one trillion dollars have adopted this important proposal topic since 2012. Annual elections are widely viewed as a corporate governance best practice. Annual election of each director could make directors more accountable, and thereby contribute to improved performance and increased company value.
Last year and earlier this year shareholder proposals to elect each director annually (declassify the board) won large majority votes at National Fuel Gas, Farmer Brothers, Western Asset, BlackRock Credit, United Therapeutics, Knight Swift Transportation Holdings, Anthem, and Kellogg.
Adoption of this proposal would be facilitated by adoption of my proposal that won strong support at the 2019 Alarm.com annual meeting – move to a simple majority vote standard.
Egan-Jones recommends For:

We believe that corporate governance procedures and practices, and the level of accountability that the Company imposes, are closely related to financial performance. It is intuitive that when directors are accountable for their actions, they perform better. We therefore prefer that the entire board of a company be elected annually to provide appropriate responsiveness to shareholders.

Proxy Insight had not reported any votes in advance of the meeting when I last checked.

To be considered for inclusion in next year’s proxy materials, you must submit your proposal, in writing, by December 24, 2020, to our Corporate Secretary c/o Alarm.com Holdings, Inc., 8281 Greensboro Drive, Suite 100, Tysons, Virginia 22102, and you must comply with all applicable requirements of Rule 14a-8 promulgated under the Securities Exchange Act of 1934, as amended (the “Exchange Act”).