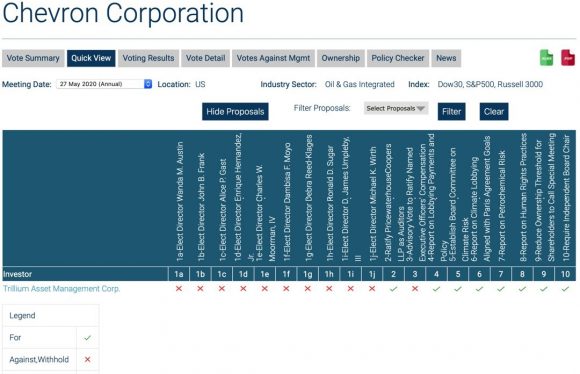 Chevron faced actor Alec Baldwin, rock star Roger Waters and Nobel Laureate Jody Williams arguing in support of shareholder proposals by Newground Social Investment aimed at improving the oil giant’s envirionmental, social and governance (ESG) practices. This is one for the corporate governance history books. How Trillium Asset Management voted at the meeting is displayed above. Soon we will have more stars presenting and more funds announcing their votes in advance of the meetings.

At its 2020 AGM, Chevron management once again faced powerful shareholder opposition to its current practices.  Among the several resolutions before Chevron shareholders were two put forward by Newground Social Investment, each of which highlights Chevron’s $9.5 billion in liability to indigenous communities in Ecuador for what may be the largest oil-related environmental disaster to impact the Amazon.

The financial risk related to this well-known environmental disaster in the Ecuadorian Amazon continues to worry company shareholders.  This despite management’s assertion that the judgment against it was obtained by fraud – a claim rejected by 29 appellate judges in Ecuador and Canada who have reviewed the matter.

Chevron has reportedly spent several billion dollars on fees to pay some 60 law firms and a number of public relations firms to defend the claims from Ecuador.  Despite this, these concerns reached new heights at this year’s AGM as several prominent shareholder voices stood in opposition to company management.

In a highly unusual turn of events, at this year’s AGM prominent artists, actors, and human rights leaders directly addressed Chevron’s Chair and CEO Michael Wirth, along with the members of Chevron’s board and senior management.  Due to the COVID-19 pandemic this year’s meeting was held online and shareholder resolutions were moved for a vote via audio submissions sent prior to the meeting.

Speaking on behalf of resolutions #9 and #10, respectively, were Nobel Peace Prize Laureate Jody Williams and noted actor and producer Alec Baldwin.  In addition, legendary rock star and human rights activist Roger Waters addressed Chevron’s board and shareholders via a third audio message.  In the two decades since its year 2000 acquisition of Texaco, Chevron has never faced such prominent voices in opposition to its practices – especially from within its own shareholder meeting.

Proposal 9 requests shareholders of 10% of outstanding common stock be granted the power to call a special shareowners meeting.

Proposal 10 seeks to require that whenever possible the Chair of the Board, of Directors be an independent member of the Board.

Mr. Baldwin spoke passionately in a two-minute presentation that detailed the reasons why Chevron’s controversial RICO victory against human rights lawyer Steven Donziger does not protect it from liability in Ecuador, and observed that pinning the company’s financial well-being on the luck of a single, discredited, judge is an irresponsible way to manage the company.  He likened the strategy to Harvey Weinstein’s failed efforts to escape justice stating:

Harvey Weinstein thought that through intimidation and litigation he could avoid justice, but he now sits in jail.  Chevron seems like the Harvey Weinstein of petroleum companies, and shareholders should be terribly concerned about a corporate strategy that appears to depend on luck not running out.

Ms. Williams, awarded the 1997 Nobel Peace Prize for her work to ban landmines, and co-signer of a recent statement to Chevron signed by 29 Nobel Laureates, noted that Chevron is acting directly counter to its stated ‘Chevron Way’ code of conduct, saying:

Apparently, appropriate use of shareholder money and company reputation are not the focus, nor is reflecting the ‘Chevron Way’.  Using corporate money to retaliate and intimidate has been Chevron’s response, where it has spent a reported $2 billion fighting the case, which reveals the lengths to which it will go to prevail.


Roger Waters Asks Chevron to Call Off the Dogs

Mr. Waters, who visited the Ecuadorian Amazon in 2018 to observe firsthand the Chevron-Texaco toxic waste pits which continue to leach deadly chemicals into the local drinking water, made an appeal for Chevron to “do the right thing.”  Citing a story of wisdom he learned from his mother, his heartfelt appeal also included a plea to “call the dogs off Steven Donziger, a human rights lawyer who is being hounded by an unfair, unkind, unlawful judiciary. And it’s wrong.”

Donziger, who played a major role in winning the Ecuador judgment, is entering his 10th month of house arrest on a pre-trial contempt order for refusing to hand over his laptop and phone – which contain privileged client communications – to Chevron lawyers.  Donziger is thought to be the only lawyer in U.S. history to be held on such grounds.

Chevron management appears to ignore the rising tide of growing international opposition to its stance on the Ecuador case, which has continued to be a major issue for shareholders at a time when the company faces a litany of other problems that relate to climate change and growing global animosity toward the fossil fuel industry.