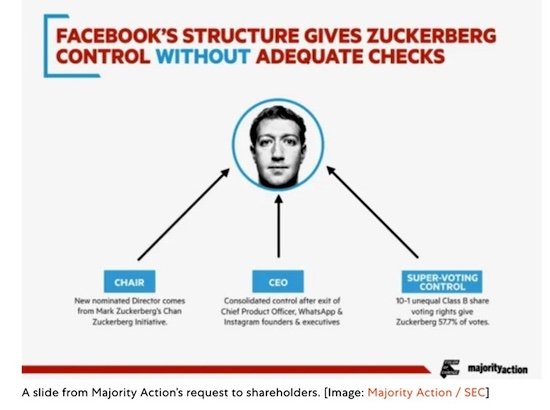 Facebook 2020 annual meeting is 5/27/2020 at 10AM Pacific virtually by entering the eligible shareholder’s 16-digit control number found on the proxy card. To enhance long-term value: Vote AGAINST Andreessen, Thiel, Zuckerberg, Auditor, Director Compensation. Vote FOR all shareholder proposals, especially Change in Shareholder Voting.  See list of all virtual-only meetings maintained by ISS. Vote by 5/26 if not attending meeting.

Facebook, Inc. develops products that enable people to connect and share with friends and family through mobile devices, personal computers, virtual reality headsets, and in-home devices worldwide. Reading through almost 100 pages of the proxy takes too much time for most people. Your vote could be crucial. Below, how I voted and why.

If you have read these posts related to my portfolio and proxy proposals for the last 24 years and trust my judgment, skip the 11 minute read. See how I voted in my ballot. Voting will take you only a minute or two. Every vote counts.

I voted with the Board’s recommendations 32% of the time. View Proxy Statement via SEC’s EDGAR system (look for DEF 14A).

From the Yahoo Finance profile: Facebook, Inc.’s ISS Governance QualityScore as of December 5, 2019 is 10. The pillar scores are Audit: 5; Board: 9; Shareholder Rights: 10; Compensation: 10.

Egan-Jones Proxy Services recommends Against Marc L. Andreessen, Peter A. Thiel, Mark Zuckerberg. All three directors have served for 10 years or more, so should no longer be considered independent nor should they serve on compensation, audit or nominating committees. Mr. Zuckerberg should not be considered independent, since he holds both the CEO and chair positions. Additionally, Facebook needs improvement in the area of cybersecurity. E-J guidelines lay that at the feet of the Board Chairman, Mr. Zuckerberg.

Facebook proposes to pay its directors $490,000 each in cash and equity in 2020. According to their own data, that puts their directors at the 95% level.

We believe that approval of the director compensation policy will help the Company to attract, retain and motivate its non-employee directors.

Sorry, I just cannot bring myself to vote pay this high for such part-time work.

Shareholders request the Board recapitalize all outstanding stock to have one vote per share. We recommend that this be done through a phase-out process.

Going to a vote for the seventh time since the company went public, the proposal brought by NorthStar Asset Management, of Boston and co-filed by the New York State Comptroller Thomas P. DiNapoli, Trustee of the New York State Common Retirement Fund, seeks a recapitalization plan that would eliminate the company’s dual class structure. NorthStar has led this proposal filing since 2015, noting that outsider class A support has consistently grown in recent years. NorthStar estimates that the proposal received favorable support from 83% of class A shareholders at the 2019 annual meeting.

Vote: FOR — This is your most important vote at Facebook.

Egan-Jones recommends For: “We believe that there is an inherent potential conflict in having an Inside director serve as the Chairman of the board. Consequently, we prefer that companies separate the roles of the Chairman and CEO and that the Chairman be independent to further ensure board independence and accountability.”

This is plain good governance.

6. Majority Vote for the Election of Directors

This proposal comes from me (James McRitchie). It is something of a test of the Board and/or Zuckerberg’s willingness to even hear the voice of shareholders. Since it simply requests that directors be elected by a majority of votes, and Zuckerberg controls a majority of the votes, it should be an easy proposal to implement. They have failed the test for many years.

Egan-Jones recommends For, writing: Contrary to plurality voting, a simple majority standard will give the shareholders a meaningful way of electing directors by limiting the power of shareholders to elect poorly performing directors.

Shareholders request the Board of Directors report on the controversy surrounding political advertising and posts on Facebook. It should assess the operational, reputational, and social license implications of the company policies, as well as the board’s assessment of the concerns regarding the potential impact of those policies on democracy, public discourse, and civil and human rights.

Given the reputational risks that the Company face, we believe that improved transparency and accountability adds to a company’s long-term sustainability to its stakeholders. We believe that the preparation of the report will allow the Company to evaluate its activities related to political advertising, and at the same time assess the operational, reputational, and social implications of such to the Company itself.

Shareholders request that Facebook’s Board of Directors nominate for the next Board election at least one candidate who has a high level of human and/or civil rights expertise and experience. Egan-Jones recommends For and writes: “We believe that human rights issues are needed to be escalated at the board level to ensure proper accountability and oversight.”
Vote: FOR

Shareholders urge the Board to oversee preparation of a report on Board-level oversight of civil and human rights risks. Again, Egan-Jones recommends For: “The adoption of a more comprehensive human rights policy, coupled with implementation, enforcement, independent monitoring, and transparent, comprehensive reporting will assure shareholders of the Company’s global leadership.”

Shareholders request the Board issue a report assessing the risk of increased sexual exploitation of children as the Company develops and offers additional privacy tools such as end-to-end encryption.
Egan-Jones recommends For: “Approval of the proposal will enable the Company to gather adequate information on the risks brought by the increasing sexual exploitation of children online, and therefore use such information in addressing the operational and reputational impacts not only within the Company, but also in the communities it serves.”

Shareholders request Facebook report on the company’s global median gender/racial pay gap, including associated policy, reputational, competitive, and operational risks, and risks related to recruiting and retaining diverse talent. The report should be prepared at reasonable cost, omitting proprietary information, litigation strategy and legal compliance information. E-J: “approval of the proposal is necessary and warranted in the Company. Pay disparities by gender in companies, in our view, could bring operational risks and reputational damage that is detrimental to shareholder value.”

Proxy Insight has nor reported any votes as of when I last checked but may have updated by the time I post this. Looking up a few funds announcing votes in advance:

You may present proposals for action at a future meeting or submit nominations for election of directors only if you comply with the requirements of the rules established by the SEC and our amended and restated bylaws, as applicable.
In order for a stockholder proposal to be considered for inclusion in our proxy statement and form of proxy relating to our annual meeting of stockholders to be held in 2021, the proposal must be received by us at our principal executive offices no later than December 11, 2020.