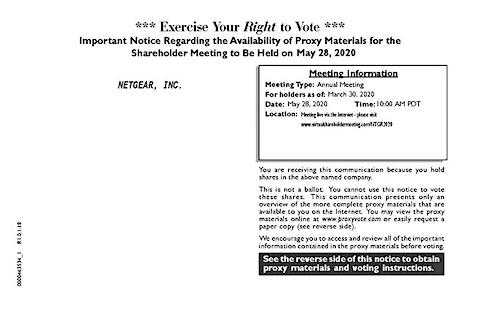 NETGEAR, Inc. designs, develops, and markets networking and Internet connected products for consumers, businesses, and service providers. It operates in two segments, Connected Home, and Small and Medium Business. Reading through almost 80 pages of the proxy takes too much time for most. Your vote could be crucial. Below, how I voted and why.

Egan-Jones Proxy Services recommends Against 1A) Patrick C.S. Lo, 1C) Jef T. Graham, 1E) Janice M. Roberts, 1F) Gregory J. Rossmann, and 1G) Barbara V. Scherer. Graham and Rossmann have served for 10 years or more, so should no longer be considered independent nor should they serve on compensation, audit or nominating committees. Regarding Lo, holding both chair and CEO positions is an inherent conflict. Roberts and Scherer should be held accountable for recommending poor compensation plan.

Netgear 2020 Summary Compensation Table shows the highest paid named executive officer (NEO) was CEO/Chair Patrick C.S. Lo, at $4.2M. I’m using Yahoo! Finance to determine market cap ($699M) and I define large-cap as $10B, mid-cap as $2-10B, and small-cap as less than $2B. Netgear is a small-cap company.

Given the above median pay, misalignment, poor performance and my general concerns about inequality, I voted AGAINST.

We believe that shareholders should not support the passage of this plan as proposed by the board of directors. We recommend the board seek to align CEO pay more closely with the performance of the company and work to reduce the cost of any similar plan that may be proposed in the future.

Proxy Insight reported no votes as of when I last checked, although may have updated by the time I post this. Looking up a few funds announcing votes in advance, NYC Pensions voted FOR all items except equity incentive plan. Calvert voted Against auditor, exec pay and equity incentive plan; For all other items.

As a stockholder, you may be entitled to present proposals for action at a forthcoming meeting if you comply with the requirements of the proxy rules established by the Securities and Exchange Commission. Proposals by our stockholders intended to be presented for consideration at our 2021 Annual Meeting must be received by us no later than December 21, 2020 (120 calendar days prior to the anniversary of the mailing date of this proxy statement), in order that they may be included in the proxy statement and form of proxy related to that meeting. The submission of the stockholder proposal does not guarantee that it will be included in our 2021 proxy statement.