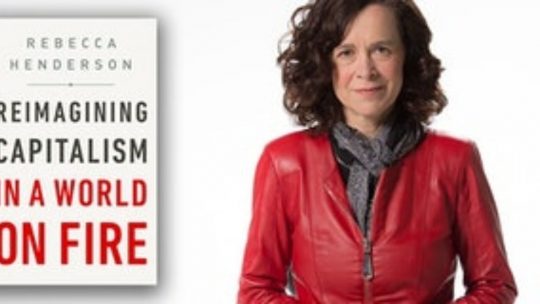 Rebecca Henderson, Reimagining Capitalism in a World on Fire points to the real need for reform and offers several suggested improvements, primarily the need to focus on purpose. (link to Amazon) I review her book below and offer my own four cents of advice. Today (6/24/2020) Rethinking Capitalism: A fireside conversation with Rebecca Henderson and Ioannis Ioannou (register).

Henderson goes through the usual litany of problems:

These were relatively easy moves where risks could be easily quantified, which helped the companies earn more money quickly. Other risks are harder to see. Henderson thinks the insurance industry may be underestimating losses from extreme weather by 50%.

Many of us know the survey that found 80% of CFOs would decrease spending on R&D to meet earnings targets, while 59% of executives would delay high net present value projects to avoid missing targets by a dime. “While asset owners may be focused on the long term, managers may not be. Yet, more than 40% of professionally invested assets are now invested using some form of ESG criteria. About half of that is exclusionary (guns, tobacco, coal); 10% engaged (advocates like me); and the rest is “ESG integration,” which I take to mean factoring in metrics managers hope are correlated with financial performance, such as SASB reports.

More informative for me were her discussions with Hiro Mizuna of the GPIF. According to Mizuna, the world’s largest fund is “not interested in making excess returns. We are more interested in making the whole system more viable.” In other words, they are using ESG to push for more beta in the entire market. (See also McRitchie 2019 Proxy Season Win for Market Beta and MPT – Why Investors Might be Climate Allies: Corporate Governance Today.)

Henderson is hopeful that $68T is expected to transfer from baby boomers to younger generations, more interested in impact investing. I think many are underestimating the interest of baby boomers in impact investing and proxy voting. They just don’t have the right tools. We need to educate brokers and investment advisors now, not wait for people my age to die off.

Another hope for rewiring finance that Henderson discusses is co-ops and employee stock plans. I mentioned the work of the Democracy Collaborative when I reviewed The Making of a Democratic Economy. New to me is an even broader effort by 1worker1vote, which has formed alliances with unions, NCB and ASBC. Again, Henderson’s assessment is that progress in this area will be slow. “At the moment they are more a promising model for the future than an immediate solution–a promising project for purpose-driven millennials!”

Again, my assessment is not so pessimistic. Once Biden is President, we will see a plethora of legislation from Senator Warren and others. I and others will also be filing proxy proposals to advance the cause. No one has to wait for boomers to die before change happens.

Henderson then announces she is “a fan of the legal form known as the ‘benefit corporation'” because they do not have the same duty to maximize shareholder value if the firm has to be auctioned. Therefore, they can better serve all stakeholders. However, she identifies two serious problems, the second being more significant in my mind.

Not all managers and boards can be trusted… it is a strategy that puts an enormous premium on good metrics and deep engagement between investors and the management team.

In the final analysis, Henderson appears to come down to the following three routes to rewiring finance:

In reviewing success stories, Henderson concludes free-riding must be made difficult, government support is often critical, cooperation must be in the interst of all stakeholders it. We need to ensure it is hard to enter/leave agreements and it is easy to punish those not playing by the rules. Governments, multinational organizations and large funds (universal owners) have the best potential as enforcers.

Dipping back into the problems introduced at the beginning of the book, Henderson concludes that “the issues central to reimagining capitalism can only be addressed by limiting the power of business.”

The choice is between inclusion–transparent, democratic, effective, market-friendly government supported by a strong society and a free media–and extraction, the rule by the few on behalf of the few. Free markets need free politics. It is time for the private sector to play and active role in supporting them.

Broadening the franchise, inclusiveness, and supporting democracy have been critical to our success to date. “Facts and science matter.” “Diversity is an asset.” Henderson points to Leadership Now and its commitment to American Democracy. The group works to end gerrymandering, ensure voter access, push for campaign finance reform, identifies and supports political candiates supporting the same goals.

These are definitely important goals. However, we can do more than one thing at once. Corporations are arguably as important as governments. Corporations, governments and other instutitions like universities must all adopt more representative and democratic structures if we are to succeed. When we learn how to make our voices heard in these other institutions, we will know better how to make governments work for all of us. I am reminded of the following cartoon:

Henderson has written an important book, full of facts, intelligent analysis and excellent examples. Anyone concerned with reimaging capitalism is likely to find many takeaways. I know I did. Here’s my own list of a few needed reforms.