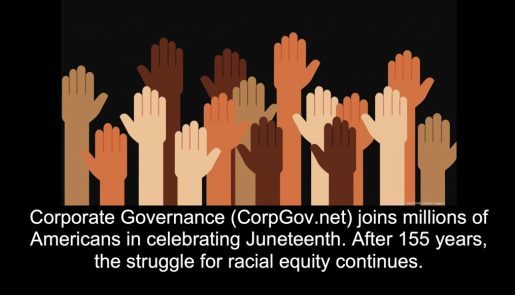 Racial equity is a serious issue. Investors, including Corporate Governance (CorpGov.net), must take action. The investor community has perpetuated and benefitted from systemic racism. We say it ends now. We’re proud to sign the Investor Solidarity Statement alongside 128 investors to end systemic racism in the sector.  Join us at #RacialJusticeInvesting.

We are long-term investors and financial service providers who commit to action and accountability to achieve racial equity.

The recent murders by police of Breonna Taylor and George Floyd, the murder of Ahmaud Arbery, the ongoing police brutality in communities of color, and the inequalities illustrated by the impacts of the Covid-19 pandemic have left the United States reeling as a nation and mobilizing protests across the globe. The need to address the realities of police brutality and the pervasive scourge of racism in America has never been more clear.

As investors, we stand in solidarity with protesters and call for the dismantling of systemic racism and recognize our responsibility to act.

We recognize that the investor community has contributed to and benefited from racist systems and the entrenchment of white supremacy. We therefore take responsibility and commit to hold ourselves accountable for dismantling systemic racism and promoting racial equity and justice through our investments and work.

We acknowledge the deep roots of structural racial inequity. Since its founding, the United States’ society and economy have been rooted in racist beliefs and systems designed to extract wealth and maintain the power of a white elite.

We denounce the racist tactics and brutality deployed by law enforcement and the criminalization, policing, and incarceration of Black men, women, and children, and other people of color in the United States. We recognize that these systems are rooted in racial oppression and serve to perpetuate the racialized criminalization of poverty.

We denounce the militarization of police and the anti-democratic response to protests, which interfere with the right to peaceful assembly and only escalates conflict, sowing division and chaos.

As a community of investors, we embrace and commit to the following 5 Calls to Action:

While about 50 in the Fortunate 100 have pledged money to advocacy organizations, that is not enough. They need to change the way they operate. Of the 300 largest public American companies, by the size of their workforce, only 19% have disclosed the ethnic/racial breakdown of their workforce. Some corporate actions stand out.

#RacialJustice Expect the sustained outrage triggered by George Floyd’s murder to prompt urgent reassessments of ESG risk. Investors are scrutinizing corporate policies on internal diversity, promotions and pay gaps, while some are using NAACP scorecards to test if what US portfolio firms say on race  accords or clashes with their political spending. At the same time, funds face queries about their own lack of diversity. A key question for both: does the firm have a credible race policy that will attract and retain millennials, whose embrace of diversity has been highlighted by the protests?

Lawsuits like the one filed Tuesday against Morgan Stanley, already common on Wall Street, are likely to surge. Marylin Booker, the chief diversity officer for 16 years, alleged race discrimination and retaliation after she was fired in December for what she claims was her push to train black financial advisers. The bank denied her allegations, which came days after it announced US$10 million in diversity grants and internal changes in response to Floyd’s death.

Reputation. Pepsi said Wednesday it will yank its 131-year-old Aunt Jemima brand showing a black woman because its “origins are based on a racial stereotype.” In the UK, insurer Lloyd’s of London said it will donate to minority communities after its links to the slave trade got attention from a University College London database of 19th-century slave owners. Pub chain Greene King, also named in the database, followed suit yesterday.

Investors offered mixed support for race-related AGM proposals in the current US proxy season, finds a June 12 Morningstar analysis—although most votes took place before Floyd’s May 25 murder. Proposals asking for disclosures on racial diversity in the workforce, management or the board have averaged a formidable 43% so far, while resolutions to extend gender pay equity disclosures to race have averaged just 10%.

Executives. Less than 8% of 4,800 global issuers have diversity policies for senior management that extend beyond gender to race, ethnicity or age, finds a June 12 ISS analysis. US firms are close to rock bottom among major markets at just 3%, vs. top scorer Netherlands at 26%. However, 62% of US CEOs plan policy changes after Floyd’s death, finds a Fortune/Deloitte survey of 222 CEOs.

Pay. Wells Fargo became one of the first companies to institute internal changes when CEO Charles Scharf saidTuesday that operating committee members’ pay will be tied to how much they increase diversity. He also vowed to double blacks in senior management by 2025, to 12%, and create a diversity post reporting to him—although the bank already has a diversity council.

ESG metrics from frameworks such as the GRI and SASB can help companies manage and track progress on their efforts to “address systemic racism,” counsels a Wachtell client memo posted Tuesday.