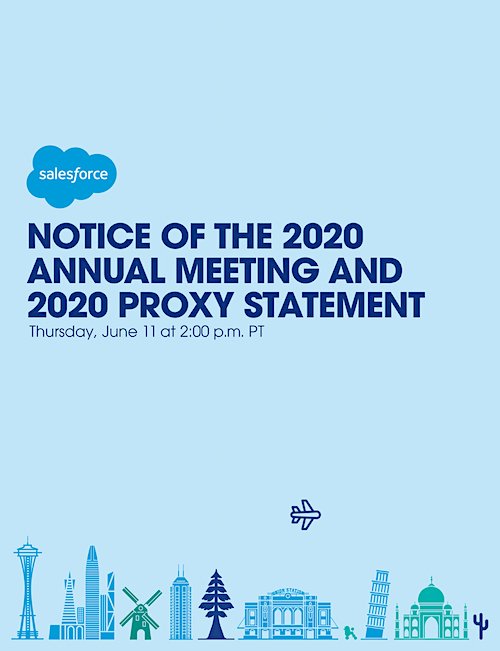 Salesforce.com, inc. is an American cloud-based software company headquartered in San Francisco, California. It provides customer relationship management service and also sells a complementary suite of enterprise applications focused on customer service, marketing automation, analytics, and application development. Reading through almost 100 pages of the proxy takes too much time for most. Your vote could be crucial. Below, how I voted and why.

I voted with the Board’s recommendations 31% of the time. View Proxy Statement via SEC’s EDGAR system (look for DEF 14A).

From the Yahoo Finance profile: Salesforce’s ISS Governance QualityScore was not available when I voted my shares. I know my previous proposals helpd them eliminate supermajority requirements and allow shareholders to call special meetings, so I assume their scores are moving in the right direction.

Egan-Jones Proxy Services recommends Against 1A) Marc Benioff, 1B) Craig Conway, 1D) Alan G. Hassenfeld, 1E) Neelie Kroes, 1G) Sanford Robertson, 1H) John V. Roos, and 1J) Maynard Webb. Benioff largely because CEO and Chair should be split – Conway, Hassenfeld, Robertson, and Webb have served for 10 years or more, so should no longer be considered independent nor should they serve on compensation, audit or nominating committees. Conway, Roos, Webb and Kroes serve on the Compensation Committee, so should be held responsible for approving compensation that needs improvement.

Egan-Jones recommends Against: Taking into account the maximum amount of shareholder equity dilution this proposal could cause, as well as both the quantitative and qualitative measures, we believe that shareholders should not support the passage of this plan as proposed by the board of directors. We recommend the board seek to align CEO pay more closely with the performance of the company and work to reduce the cost of any similar plan that may be proposed in the future.

The shareholders are being asked to approve the amendment of the Employee Stock Purchase Plan (ESPP) to increase by ten million shares the number of shares reserved for issuance under the ESPP.

An Employee Stock Purchase Plan or (ESPP) can be an important tool increasing ownership among company employees. In the US the tax advantages of a qualified plan are compelling… Egan-Jones supports the establishment of such qualified ESPPs unless there is a compelling example of prior abuse or significant reason to expect such abuse in the future. We find no evidence of prior or expected future abuse of this ESPP and note that it appears to meet the requirements of a qualified plan.

I would prefer the ESPP be administered by an employee committee elected by workers, rather than the Board. Such a plan would provide additional incentives to provide more channels of communication between the Board and employees. I am thinking of filing a proposal around this idea in the future.

Salesforce 2020 Summary Compensation Table shows the highest paid named executive officer (NEO) was CEO/Chair Marc Benioff at $26M. I’m using Yahoo! Finance to determine market cap ($156B) and I define large-cap as $10B, mid-cap as $2-10B, and small-cap as less than $2B.  is a large-cap company.

Given the above median pay, mixed performance, E-J recommendation and my general concerns about inequality, I voted AGAINST.

By contrast, calling a special meeting may require a two-step process. A shareholder who does not own the minimum shares required must first obtain the support of other shareholders. Once that meeting is called, the shareholder must distribute proxies asking shareholders to vote on the proposal to be presented at the special meeting.

This two-step process can take more time and expense than the one-step process of soliciting written consents, especially at Salesforce, which allows only investors with 15% of outstanding shares to call a special meeting, instead of 10%, as allowed by many companies.

Any stockholder proposal submitted for inclusion in the Company’s proxy statement for the 2021 Annual Meeting of Stockholders pursuant to Rule 14a-8 of the Exchange Act should be addressed to the Secretary of the Company at the address set forth above and must be received at our principal executive offices not later than December 30, 2020. In the event the date of the annual meeting is moved by more than 30 days from the one-year anniversary of the date of the 2020 Annual Meeting, then notice must be received within a reasonable time before the Company begins to make its proxy materials available. Upon such an occurrence, the Company will publicly announce the deadline for submitting a proposal by means of disclosure in a press release or in a document filed with the SEC