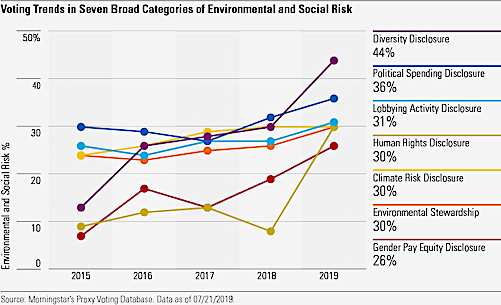 Shareholder-Driven Stakeholderism (U of Chicago) by Cathy Hwang and Yaron Nili argues the Business Roundtable Statement of the Purpose of a Corporation should be seen as another way to entrench management, instead of disarming greedy profit-driven shareholders.

Analysis of data, drawn from companies in the S&P 1500, found shareholders, not management, “have been the driving force behind the environmental, social and governance principles that often align with stakeholder governance.”

This excellent article could have been bolstered by noting the timing of the Statement of Purpose. It was announced a few months before SEC proposed rules to greatly reduce shareholder proposals but nine months after many of us participated in an SEC roundtable on the proxy process. Additionally, there is at least some evidence that corporate directors think shareholders are placing too much emphasis on stakeholder issues. That runs counter to the BRT’s message of trust us, instead of shareholders with those issues.

Yes, the Revlon rule requires that when the breakup of the company becomes inevitable, management’s primary duty switches from protecting shareholders’ long-term interest to that of an “auctioneer,” seeking the highest sale price for shareholders.

However, wealth maximization applies only in limited circumstances.

Re the BRT Statement, Hwang and Nili note, “the most effusive praise came from Marty Lipton, the famed champion of managerial discretion.”

Inherent in Lipton’s praise is the idea that shareholders—but not management—are aligned against the ESG values that underlie stakeholder theory.

The authors turn from Lipton’s speculation to harder evidence collected from the websites of the 1500 largest American companies.

Second, to the extent management is involved in companies’ adoption of ESG-related policies, that involvement tends to be relatively disorganized and ad hoc…

The decision-making process around what policies to disclose to the public is similarly haphazard. In particular, interview participants reported that companies adopt a lot of policies—ESG-related and not—and what they choose to disclose is largely due to two things: the demands of a particular shareholder group (and the terms of the subsequent settlement), and the general counsel’s discretion.

The Future of Stakeholder Theory

Our work suggests that pressure from shareholders has been the primary reason that public companies have choose to adopt ESG-related policies; companies and managers do not often seem self-motivated to do so.

Given those findings, those advocating a stakeholder model of corporate governance should “proceed with caution” when relying on managers, with the possible exception of privately-held companies. The main reason?

When public companies ignore their shareholders’ suggestions and proposals, a public relations fallout can ensue.

In other words, stakeholder theory may be best advanced through changing public opinion. This comports with earlier findings by Renee Aggarwal, Isil Erel and Laura T. Starks, Influence of Public Opinion on Investor Voting and Proxy Advisors (August 6, 2014).

Our results suggest that public opinion, as measured through either Gallop Poll survey or media coverage at the aggregate and firm level, influences shareholder voting. The implications of these results are that financial intermediaries, such as mutual funds, pay attention to the shareholders’ preferences regarding corporate governance. These results hold even after controlling for the recommendations of the proxy advisor.

See Will Corporate Elites Attack Public Opinion Next? Since public opinion is such an important driver of corporate behavior, it is important to look at the BRT’s Statement in context.

The Statement was announced a few months before SEC proposed rules to greatly reduce shareholder proposals but nine months after many of us participated in an SEC roundtable on the whole proxy process.

As I wrote in Shareholders v Stakeholders,

Organizations like the Business Roundtable have requested the SEC to substantially raise the thresholds for submitting and resubmitting shareholder proposals. In a June 3 letter to the SEC, the BRT stated: “[F]rom 2016 to 2018, the same three individuals and their families submitted or co-filed over 24 percent of all shareholder proposals each year at Russell 3000 companies.” “Unsurprisingly, these types of proposals have limited success and seldom receive the majority support of shareholders if they are not first excluded from a company’s proxy statement via the SEC’s no-action process.”

As noted in McRitchie 2019 Proxy Season Win for Market Beta, I am one of the three individuals criticized for submitting proposals that have limited success. However, my proposals averaged majority support by shares voted. It is no coincidence that attacks on shareholder rights and the BRT’s Statement are coming at the same time shareholders are winning more and more votes, especially proposals of interest to a wider group of stakeholders. For example, see Proxy Process Opens Door to Constructive Engagement on Climate, and the graph by Jackie Cook below. 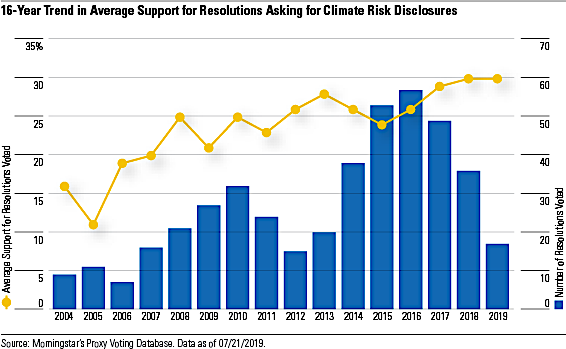 Contrary to the propaganda put forth by the Business Roundtable and others, they did not propose raising shareholder proposal thresholds because gadflies were submitting proposals that “seldom receive the majority support of shareholders.” No, they seek to exclude shareholder proposals because proponents are beginning to win more frequently. Corporate governance is changing. A look back in history at another example is instructive.

In 1990, without public discussion or a rule change, the SEC began issuing a series of no-action letters prohibiting proxy access proposals. Proxy access proposals had never won, but they were not rare. For example, in 1980 Unicare Services included a proposal to allow any three shareowners to nominate and place candidates on the proxy. Shareowners at Mobil proposed a “reasonable number,” while those at Union Oil proposed a threshold of “500 or more shareholders” to place nominees on corporate proxies.

The SEC’s about-face in corporate governance was probably prompted by fear that “private ordering,” through shareowner proposals, was about to begin in earnest. As of 1986, only I believe only two proposals of the thousands submitted had ever been approved—but the tides of change were turning. A 1987 proposal by Lewis Gilbert to allow shareowners to ratify the choice of auditors won a majority vote at Chock Full of O’Nuts Corporation and in 1988 Richard Foley’s proposal to redeem a poison pill won a majority vote at the Santa Fe Southern Pacific Corporation.

It was this mini-surge of two proposals from shareholders winning in rapid succession that led the SEC, under pressure from business managers, to change the rules without going through the required rulemaking process. See AFSCME v AIG (2006). At least this time the SEC is going through the rulemaking process. The BRT’s Statement of Purpose is designed to placate public opinion. It is as if the BRT is saying, we do not need shareholder proposals; management is looking out for everyone. Don’t count on it.

If companies are accountable to multiple stakeholders, they can all too easily end up being accountable to no one. The board and CEO can play one group off against another. Additionally, only the voice of shareholders (and potentially government) is strong enough to legally bind corporate governance.

See Stakeholder Theory: Impact and Prospects for a history of that perspective and Review: The Corporate Objective for my thoughts on a more innovative attempt to move forward within that framework. Few BRT signatories are calling for stronger unions or a stronger regulatory framework to hold companies more accountable to all stakeholders.

Stakeholderism: Are We Done Yet?

PwC’s 2019 Annual Corporate Directors Survey: The collegiality conundrum: finding balance in the boardroom, which collected the views of over 700 public company directors, is instructive. Concerning the August 2019, BRT Statement on the Purpose of the Corporation, only 58% agreed that companies should prioritize a broader group of stakeholders when making company decisions. Support from women directors was at 71% but there are so few of them, the opinion of male directors carries the day. Only 54% of them gave much credence to the stakeholder model. Were the CEOs who comprise the BRT going rogue on their director bosses?

Environmental, social and governance (ESG) issues are the primary concern of stakeholders. The BRT Statement implied CEOs, not shareholders, are better equipped to handle the issues. But how likely are CEOs to act when more than half (56%) of directors say investors are giving too much time and focus to ESG–nearly twice the percentage saying the same in 2018? 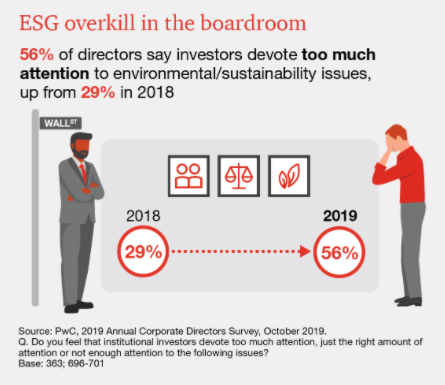 As we have seen, Hwang and Nili argue shareholders, not management, “have been the driving force behind the environmental, social and governance principles that often align with stakeholder governance.” From PwC’s survey, it looks like stakeholderism gets a bare majority of support from directors and most think shareholders are paying too much attention to these issues, including concerns with diversity.

Obviously, especially in light of findings by Hwang and Nili, shareholders continue to have an important role in advancing stakeholder interests. What if directors actually took stakeholderism seriously? What would they do?

One interesting suggestion comes from Doug Chia in Rethinking Board Committees. Chia suggests adopting the following committee framework, if only as an exercise:

According to Chia, “It is time to rethink how boards create and delegate their advisory and oversight responsibilities to committees in a way that reflects its commitment to considering the interests of its key stakeholders: customers, employees, communities, and shareholders.” In the meantime, we will continue to rely heavily on shareholders to raise these important issues.

The SEC continues to accept comments on their rule proposal to disenfranchise shareholders, even though the deadline has passed. See SEC Rulemaking Comment Tips.

I would love to get feedback from readers on these issues. Please use the comment box below.