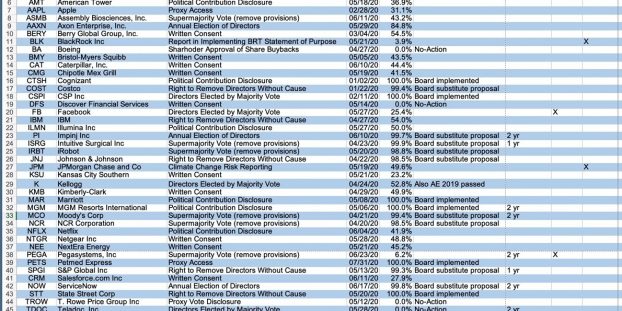 Spring 2020 CorpGov.net Proxy Proposal results are in.  Once again, rules proposed by the SEC would likely cost shareholders billions of dollars because of delayed good governance practices. Since the SEC has not yet finalized their costly rulemaking, I filed the following update on their proposed Procedural Requirements and Resubmission Thresholds under Exchange Act Rule 14a‐8 (File No. S7-23-19)

This letter supplements my previous letters on SEC Release File No. S7-23-19 and presents additional evidence from the Spring 2020 proxy season. Once again, the evidence points to the likelihood that enactment of the SEC’s proposed rules in this area would likely cost shareholders and the economy billions of dollars a year because they would delay implementation of good governance practices.

During the hearing for the referenced rulemaking, Chairman Clayton noted, “it is clear to me that a system in which five individuals accounted for 78% of all the proposals submitted by individual shareholders would benefit from greater alignment of interest between the proposing shareholders and the other shareholders—who hold more than 99% of the shares.” https://www.sec.gov/news/public-statement/statement-clayton-2019-11-05-open-meeting#_ftn19

That statement appears to run contrary to Chairman Clayton’s testimony to the Senate. “The question we ask ourselves every day: how does our work benefit the Main Street investor? Each proposal or action we take is guided by that principle.” https://www.sec.gov/news/testimony/testimony-financial-services-and-general-government-subcommittee-us-senate-committee

The SEC Release overemphasizes the cost to companies of processing proposals. Chairman Clayton cited several letters, supposedly from individual investors, praising the Release. These and others turned out to be essentially faked, generated by an advocacy group underwritten by companies seeking to curtail shareholder rights, primarily concerned with the rise of environmental, social, and governance (ESG) proposals.

There is nothing historically unusual about a few shareholders filing most of the proposals. A study of 286 shareholder proposals submitted between 1944 and 1951 found that 137 or 47% of all proposals, not just those of individuals, were submitted by the Gilbert brothers (The SEC Proxy Proposal Rule: The Corporate Gadfly, p. 830 https://chicagounbound.uchicago.edu/cgi/viewcontent.cgi?article=2770&context=uclrev)

In fact, I am surprised there are not even fewer retail shareholders filing proposals, given the historic decline in retail investing. As I mentioned in my rulemaking petition seeking greater transparency in fund voting, “while about half of American households own stock, they do so mostly through mutual funds or retirement accounts. Less than 14% of households directly own stock. Of direct shareholders, about two-thirds hold less that $6,000, often through employee stock ownership plans. In 2010, of direct holding families, 29 percent held only one stock; 18 percent held more than ten stocks. Of the families that held shares, the median portfolio was $20,000, while the median retirement account of families with retirement accounts was $44,000. (https://www.sec.gov/rules/petitions/2019/petn4-748.pdf) Of course only a few people file shareholder proposals. In an American of growing inequality, only a few own stocks directly!

While five individuals may file a disproportionate number of shareholder proposals, that does not mean our proposals lack value. My proposals and my wife’s averaged more than 50% support last year. All sought to make corporations more democratic and accountable. See McRitchie 2019 Proxy Season Win for Market Beta https://www.corpgov.net/2019/08/mcritchie-2019-proxy-season-win-for-market-beta/)

The results are now in from the Spring 2020 season for proxy proposals submitted by James McRitchie and Myra Young, two of the five individuals noted by Chairman Clayton above. Most of our proposals won (26 out of 50). They averaged a 59.5% vote FOR. The median vote was 51.4% FOR. Every proposal to declassify boards (move to the annual election of all directors) won by a wide margin. Every proposal to allow directors to be removed without cause also passed. Shareholders apparently want accountable directors and do not believe directors must be criminals to be subject to removal. See the attached spreadsheet.

Boards often agreed with us. Fully 38% of our proposals were either adopted by boards without going to shareholders for a vote or they substituted their own proposal after reviewing ours and won high support. If the SEC’s proposed rule had been in effect, we would have had to wait an extra year or two to submit 14 out of 50 proposals. Ten of those proposals were either implemented outright by boards or won high votes. Investors would have had to wait up to two years to receive the benefit of those shareholder enhancing reforms.

Note also that 3 of our proposals intentionally tilted at windmills because the companies have dual-class structures or are otherwise controlled by insiders. Although we had virtually no chance of winning, we believe it is important to call attention to some issues regardless of real shareholder voice. Another 2 proposals simply supported primary fillers. None of these five proposals achieved a 50% level of support. If these proposals were removed, 25 of 45 of our proposals won at least a 50% vote.

The SEC’s proposal to raise submission thresholds would have had a significant impact on our ability to get companies to adopt good governance practices. Fully 10 out of the 26 proposals (38%), that were either implemented outright by boards or won votes of 50% or more, would not have been eligible for submission under the proposed rules. Those adopted or high vote proposals would have been delayed by a year in 4 cases and by two years in 6 cases.

Progress on best practices often depends on the initiative of a few. Since the average shareholder holds their shares for somewhere between four and eight months (https://www.politifact.com/factchecks/2016/jul/06/mark-warner/mark-warner-says-average-holding-time-stocks-has-f/), requiring shareholders to hold $2,000 of shares for three years before filing or $25,000 for one year before filing appears entirely unreasonable. Will the SEC next deny shareholders the right to vote unless they have held large value shares or have held shares for three years or more? Why not just impose an old-fashioned poll tax for filing or voting?

The SEC’s two- and three-year holding periods are arbitrary and capricious, with no factual backing as to rationale. Tax law in the US declares a year of holding as long-term investing. It makes no sense for the SEC to be three times as conservative as that widely accepted legal standard.

A recent Diligent Institute report finds that equity returns for 2017 and 2018 of the top 20% of S&P 500 companies exhibiting strong corporate governance (such as features adopted as a result of our proposals) outperformed the bottom 20% by 17% over that period. (The High Cost of Governance Deficits: A Case for Modern Governance, Diligent Institute, https://www.diligentinstitute.com/modern-governance-report/). “Good governance” included shareholder rights, such as the annual election of directors and simple majority vote standards. 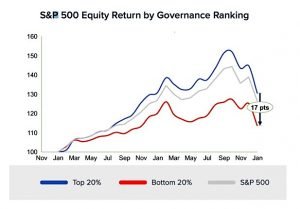 The High Cost of Governance Deficits: A Case for Modern Governance,” 2019, Diligent Institute

Since the market cap of S&P 500 companies (leaving out thousands of other companies) rose $1,843,463,000,000 in just those two years (http://siblisresearch.com/data/total-market-cap-sp-500/), the Diligent Institute report provides supporting evidence that the proposed rule would likely result in decreased gains to shareholders (opportunity costs) of billions, maybe hundreds of billions, of dollars each year by delaying passage and enactment of shareholder proposals promoting good corporate governance. That enormous cost is not considered in the SEC Release’s economic analysis.

In conclusion, while Chairman Clayton claims to be out to protect Main Street investors, the proposed rules would further disenfranchise us, leaving Mr. and Ms. 401(k) largely dependent on a conflicted Big Four mutual fund families to monitor the same corporations they seek contracts with to administer their retirement services. These funds have never filed a single shareholder proposal in their entire history and the Commission has failed to even hold a hearing on my petition to update proxy disclosure rules for such funds. (https://www.sec.gov/rules/petitions/2019/petn4-748.pdf)

The above analysis does not consider the proposed resubmission or momentum thresholds, which would also likely result in further delays of the adoption of best practice corporate governance standards and lower shareholder returns.

With regard to the proposed one proposal provision, companies are allowed to use the same outside counsel for filing more than one no-action request. Why should shareholders be prohibited from using an agent who has also filed a proposal or has filed a proposal on another’s behalf? I raised this issue in previous comments. However, they are worth repeating because the rule is so discriminatory.

Don’t piss on my leg and tell me it’s raining. The “one proposal” rule should be called the “Chevedden Amendment,” because it is specifically targeted at one individual and those who work with him. Will the SEC propose a “Gibson Dunn Amendment” aimed at cutting down the number of companies any single law firm can represent? That is highly unlikely. This SEC is more concerned with protecting companies from their shareholders than ensuring the rights of shareholders.

Of course, the proposed provision targeted at the “Chevedden group” would also disable the efforts of financial advisors and others around the country acting as agents on behalf of clients.

The current annual N-PX proxy reporting requirements, promulgated before the widespread use of the internet, obfuscate the ability of investors to compare voting records. Compare the sortable voluntary disclosure of Domini (http://vds.issproxy.com/SearchPage.php?CustomerID=1550) with the mandated disclosure of the Vanguard Index Trust Total Stock Market Index Fund (https://www.sec.gov/Archives/edgar/data/36405/000093247118006890/indexfunds0085.htm), which requires a laborious effort to decipher.

A better way for the SEC to evaluate the proxy proposal rules would be to first increase public scrutiny of how funds vote. Driving competition around votes would drive discussion and the demand for proposals better aligned with investor values. Some shareholders and fund investors may seek better alignment between fund labels, such as “ESG” or “positive impact” and fund voting. Others may focus exclusively on short-term shareholder returns regardless of environmental, social, or governance impact. Real-time disclosure in machine-readable format would allow us to quickly know which funds are voting with the values of Mr. and Ms. 401(k) and Main Street investors. See my rulemaking proposal File 4-748, Report of proxy voting record (https://www.sec.gov/rules/petitions/2019/petn4-748.pdf).