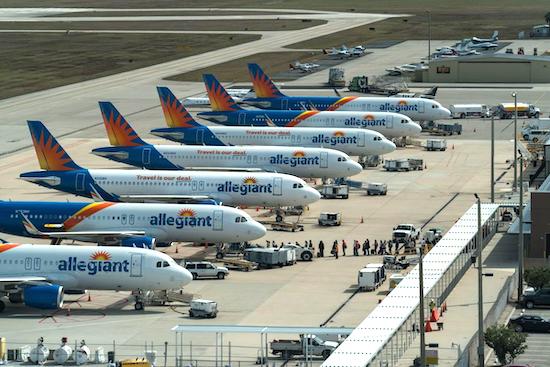 ALGT second-quarter 2020 loss of $5.96 per share (excluding 11 cents from non-recurring items) was wider than the Zacks Consensus Estimate of a loss of $4.53.  The company reported earnings of $4.33 per share in the year-ago quarter when air-travel demand was strong. However, with the advent of coronavirus the same plummeted and hurt second-quarter 2020 results.

Moreover, quarterly revenues of $133.3 million plunged 72.9% year over year but surpassed the Zacks Consensus Estimate of $125.9 million. The downtick was caused by 74.4% drop in passenger revenues.

Maybe Allegiant Travel is just requiring an in-person meeting in hopes of getting two or three more passengers? Could they actually be that desperate? I presume the more likely rationale is simply to make it more difficult for shareholders to attend. Next year, maybe Allegiant Travel will hold their AGM at the bottom of a remote mine? Time to bring back the Foxhole of the Year award? If you need another reason to vote against Montie Brewer and Gary Ellmer, consider that both have served longer than 10 years, so should not be considered independent.

Vote for Proposal No. 4 before August 4th
Shareholder Proposal Regarding Stockholder Right to Call a Special Meeting for the Owners of 10% of Company Stock

This is a case of management ignoring this Securities and Exchange Commission pandemic guidance, for no recognized reason, after being advised of it:

the staff encourages issuers, to the extent feasible under state law, to provide shareholder proponents or their representatives with the ability to present their proposals through alternative means, such as by phone, during the 2020 proxy season.

The management requirement of an in-person proposal presentation was conveyed by Robert Goldberg, Corporate Secretary. The Ellis Funk website has this information on Mr. Goldberg:

During his career, Rob has taken three different airlines public along with other companies. Noteworthy transactions include a half billion dollar public offering of common and preferred stock, negotiation of a billion dollar equipment purchase agreement and mergers involving publicly held companies.

It appears that the members of the Nomination Committee may ultimately be responsible for requiring an in-person presentation of Proposal 4.

Vote for Proposal No. 4 before August 4th

Written materials are submitted pursuant to Rule 14a-6(g)(1) promulgated under the Securities Exchange Act of 1934.*
*Submission is not required of this filer under the terms of the Rule, but is made voluntarily in the interest of public disclosure and consideration of these important issues.
This is not a solicitation of authority to vote your proxy.  Please DO NOT send me your proxy card; the shareholder is not able to vote your proxies, nor does this communication contemplate such an event.
The shareholder asks all shareholders to vote their choices by following the procedural instructions provided in the management proxy distribution.