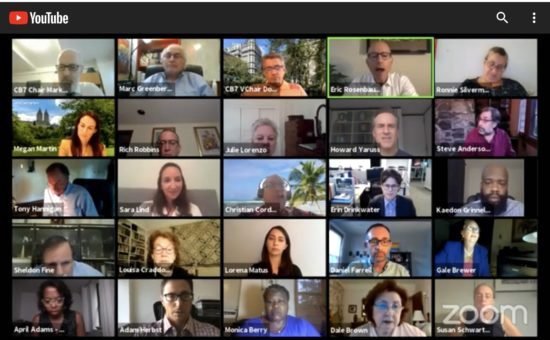 Chat Rooms are the key missing ingredient at virtual shareholder meetings. Virtual-only shareholder meetings increased dramatically (from 286 in 2019 to 2,200 so far in 2020) due to the Covid-19 pandemic. Chat rooms before and after meetings would allow shareholders to interact informally with each other and with corporate representatives, as they do at in-person meetings.

The vast majority of votes are cast and counted prior to annual meetings. Therefore, many company executives and directors view them as mere formality. The main objective is to do the legal minimum. Move through the proxy ballot items swiftly. Accept any proxies voted at the meeting and end within 10-15 minutes.

Others see the meeting as an opportunity to communicate with shareholders about company strategies and answer a few questions. Still, these meetings are akin to freshman classes. Professors/CEOs impart knowledge and students/shareholder ask clarifying questions, mostly to ensure they understand. Some company representatives are primarily concerned with the appearance of fairness. They do not want to appear like dictators, for example, in choosing who can ask questions. They want to address the questions most shareholders want to be answered.

Discussions around “best practices” and academic research are mostly concerned with transparency and allowing shareholders to cast their vote and have questions thoughtfully considered.

Corporate elections are not democratic. This is not a secret. Annual shareholder meetings are not debating forums. One candidate is put forward by the nominating committee for each slot.  No challengers are on the corporate proxy. Most companies use a plurality vote standard to elect directors.  One vote is all that is needed. To contest board nominees, shareholders file a separate proxy solicitation and ballot.

Shareholders may have a “say on pay” and a vote on shareholder proposals but these are advisory votes. Shareholders get 500 words to argue their proposals. Company officials are under no such limit for their own proposal or for rebuttals. A large portion of shareholder proposals are challenged and excluded from the proxy by numerous exemptions, technical and administrative requirements. Electronic voter information forms, until recently, were not even required to “clearly and impartially” identify shareholder proposal topics. (Altera)

Neither are companies required to identify the name of shareholder proposal proponents. Any blanks left by shareholders on their proxies are not counted as abstentions but as votes in favor of whatever the board recommends. Additionally, many companies, such as Amazon, deploy “Formula Swapping.” They count certain management items in the proxy differently than shareholder items.

Virtual chat rooms would in no way overcome these non-democratic obstacles. However, chat rooms would facilitate the ability of shareholders to at least communicate in many more two way dialogues.

They are called shareholder meetings for a reason. This is the one opportunity shareholders have each year to engage in-person with other shareholders and with company representatives. Virtual-only meetings remove those opportunities. They don’t have to.

Think of conferences you attend. They are usually much less predictable and more informative than typical shareholder meetings. Still, much of the benefit of attending comes from the opportunities to network. You meet people, discover common interests, and exchange contact information.

Similarly, we learn more from conversations in the hallways, or before and after, than during the legal formalities of shareholder meetings. For example, I have frequently learned other shareholders do not really understand some of the items they voted. On rare occasions, such conversations result in changed votes. At one shareholder meeting, I learned one director had never met another. The board always met over the phone. At another, I learned the company had outsourced far more functions than I had realized. Another informal conversation revealed a board’s likely succession plan. Wait for the founder’s twelve-year-old son to grow up.

Some potentially embarrassing conversations would be avoided in a chat room since the feed could easily be reviewed by management. As a result, staff and directors will be more guarded. However, chat rooms would still facilitate genuine interactions and the exchange of contact information. If virtual meetings are to be considered shareholder, instead of incumbent meetings, chat room functions are needed.  The discourse between attendees is of critical importance.

Many company officials feel no obligation to encourage communications, especially between shareholders. Therefore, attention is focused on the formal meeting, management presentations, as well as question and answer sessions.

Miriam Schwartz-Ziv has written the most interesting paper so far this year on the difficulties shareholders have experienced logging in, voting, and asking questions at virtual shareholder meetings. Below I discuss Ms. Schwartz-Ziv’s paper, “How Shifting from In-Person to Virtual Shareholder Meetings Affects Shareholders’ Voice.” I urge readers to attend her seminar on September 2nd.

Virtual meetings can increase shareholder attendance. They require less time and expense to attend. However, they can also be more easily staged. That limits shareholder voice and the ability to challenge corporate incumbents. Schwartz-Ziv found both to be true. More shareholders attended; less information was provided.

Schwartz-Ziv worked with me (James McRitchie) and John Chevedden to help assess the ability of shareholders to ask questions and the willingness of company officials to respond. Clearly, this was not a representative sample. However, we attended far more AGMs than most shareholders and were willing to help gather information. Researchers also coded transcripts and audio recordings for AGMs held this year and last year.

The heart of Schwartz-Ziv’s findings is a typology of evasion tactics.

Platform choice could be another tactic or could have occurred in some instances by chance, as companies scrambled for platforms. Only 10% of meetings using Broadridge had no questions. But 67% of meetings on non-Broadridge platforms had none. She tracked Cheveddon and McRitchie (C&M) and found that

in 54.5% of the firms to which C&M submitted at least one question, shareholders faced an obstacle to submitting questions. I define an obstacle as one of the tactics I identify, or broadcasting meetings via a non-Broadridge platform.

Schwartz-Ziv concludes with several policy recommendations that aim to support the goal of fostering communication between companies and shareholders in virtual shareholder meetings. Since she explains the full rationale in her paper, I just list them briefly below.

I agree and recommend others, most of which are discussed positively in Schwartz-Ziv’s paper.

Chat rooms have been side-stepped as an issue. Company officials think shareholders should get their own room if they want to chat. Why should the company pay shareholders to communicate with each other? Many view the meetings as company meetings, not shareholder meetings. Incumbent management and directors represent the company, not shareholders. My message to shareholders: this is about you, your ability to communicate, your ability to form communities of interest and influence. Chat rooms are the most critical component of virtual shareholder meetings. If they are missing, you have lost one of your primary means of forming communities able to take corporations to the next level, whatever that may be in your own vision of the future.

Letter to Clayton and Hinman on Virtual and Hybrid Meetings Council of Institutional Investors, Shareholder Rights Group, Ceres, US SIF, and Interfaith Center on Corporate Responsibility