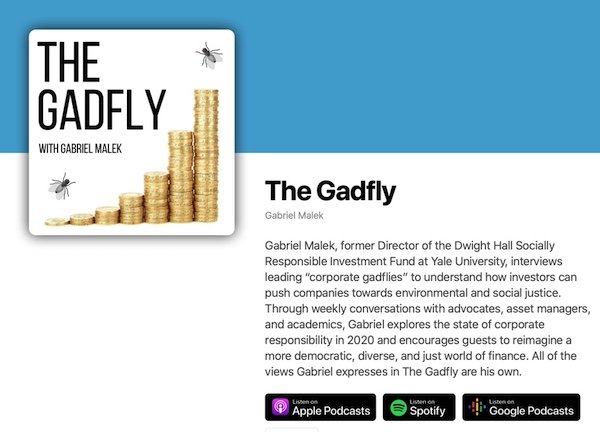 This is my current favorite of the #corpgov #ESG podcasts. I am partial to the name gadfly, since I am often called one myself. Likewise, Malek is trying to talk with the same audience I am hoping to reach. Sure, we both want environmental, social, and governance (ESG) professionals to pay attention. However, we are also both hoping to reach everyday people. If you like what he is doing, consider helping to sponsor this relatively new podcast, The Gadfly with Gabriel Malek. From his website

Gabriel Malek, former Director of the Dwight Hall Socially Responsible Investment Fund at Yale University, interviews leading “corporate gadflies” to understand how investors can push companies towards environmental and social justice. Through weekly conversations with advocates, asset managers, and academics, Gabriel explores the state of corporate responsibility in 2020 and encourages guests to reimagine a more democratic, diverse, and just world of finance.

His first guest was Gabe Rissman who, like Malek, was involved with fossil fuel investment and shareholder engagement at Yale. They discussed Rissman’s startups Real Impact Tracker and YourStake. (Disclosure: I made a small investment in YourStake). YourStake began as a petition aggregator. Now it is moving to help financial advisors show the impact of sustainability efforts, engagement, and fund voting.

Then Malek interviewed Eric Darrisaw, long-time shareholder advocate for racial equity in corporate America, about how activists can push companies to support black employees. Darrisaw’s life has an interesting trajectory from his interest in apartheid in South Africa to his current work at the Omniresearch Group. Darrisaw provides many insights. I especially like how he contrasts the difference between writing a check to a civil rights organization and partnering. The later is more likely to bring about accountability by measuring ongoing metrics, such a proxy voting records.

Malek next spoke with Julie Goodridge, CEO of NorthStar Asset Management and a leading investor advocate on LGBTQ rights, about progressive wealth management and the fight for LGBTQ equality in the workplace. I have been working with Goodridge for years, primarily by cosponsoring or supporting shareholder proposals.

Josh Zinner, CEO of the Interfaith Center on Corporate Responsibility, was the fourth guest. I have been a fan of ICCR since about 1976 when Tim Smith, a long-time mentor, headed the organization. Zinner discussed COVID-19’s impact on shareholder engagement, shareholder rights, and one of ICCR more recent initiatives, the Investor Alliance on Human Rights, which I am active with.

Cary Krosinsky was Malek’s fifth guest. Over the years, I have read his work on ESG data and the importance of metrics.  I found it dense but insightful. On the podcast Krosinsky and Malek mostly discussed China, the crackdown on protests in Hong Kong, on Uyghurs and Krosinsky’s book Modern China: Financial Cooperation for Solving Sustainability Challenges.

Their discussion reminded me of one I had with one of my wife’s uncles when we visited her ancestral home. Uncle spoke of the Cultural Revolution as that “funny period.” They broke both his arms and threw him in prison for being an educated engineer. After poorly designed dams broke, the Communist Party recognized engineers were important, so he was released. He had just gotten back from a nationwide tour of universities. He had been talking to students and advising them to go slow in their demands. Tiananmen Square protests began soon after Myra and I got home. Uncle was not as influential has he hoped.

While I abhor many practices in China, such as the mistreatment of Uyghur minorities, I largely agree with Krosinsky. We won’t solve the climate pandemic without working with China. Hopefully, engagement on issues where our countries can work together will also help to eventually resolve differences.

Next up was Professor Carla Fredericks, Director of the American Indian Law Clinic at the University of Colorado Law School and Faculty Director of First Peoples Worldwide, about investor efforts to promote Indigenous rights. From the racist names of sports teams to the more immediate physical harms of the Dakota Access Pipeline. Protest is important but so is engaging with your portfolio advisors and companies.

Next, Lisa Hayles, Investment Manager at Trillium Asset Management and long-time leader in sustainable investing spoke about racial representation in the ESG industry and her recent article “Reflections on becoming a ‘Token’ Hire.” Hayles makes convincing arguments around how investors benefit from corporations being inclusive. Too many firms are overlooking enormous talent pools. Pressure is coming to ask for and require disclosures around racial and ethnic corporate disclosure.

Until recently, Trillium disclosed their proxy votes in advance of annual shareholder meetings. See links on CorpGov.net. Unfortunately, they are having some software problems with a new contractor. I fully expect they will be posting those votes again in a few months. Trillium is one of the best, not only because they are a bit more strident than most but also because they post their voting rationale.

I recommended Malek interview Nicholas Benes, founder and Representative Director of the Board Director Training Institute of Japan, about his recent article “Redesigning Corporations: Incentives Matter,” which appeared on the Harvard Law School Forum on Corporate Governance in mid-June.

Of course, I loved this interview and did a post on Benes’ proposal myself. While Benes’ idea would not solve all the problems created by granting corporations limited liability, it could be a huge practical step.  If enacted, it would immediately encourage better monitoring by corporate executives and investors to ensure against the worst abuses of externalizing costs and bankruptcies that leave unfunded liabilities.

In last week’s episode, Malek interviewed Natsha Lamb, Managing Partner at Arjuna Capital, about her ongoing engagement work with Facebook, Google, and Amazon. It was a timely discussion, following virtual Congressional hearings with CEO’s of those companies, as well as Apple. Hate speech and fake news, there could hardly be a more timely topic, given the upcoming elections.

There is perhaps no more dangerous trend in finance than the shift to dual-class share structures that create founder dictators and oligarchs of corporate empires. Mark Zukerberg, for example, has more power than most countries.

Already, less than 14% of households directly own stock. direct shareholders, about two-thirds of those (about 10% of households) hold less than $6,000, often through employee stock ownership plans.

My upcoming discussion on The Gadfly with Gabriel Malek touches on issues of inequality. More democratic corporate governance is critically important if we are to maintain our fragile democratic government. I discuss my rulemaking petition to the SEC for Real-Time Disclosure of Proxy Votes, as well as other possible steps to reconstruct corporations and capital markets to be more inclusive.

Please subscribe to and support The Gadfly with Gabriel Malek. I would love to get feedback on my own discussion with him as well as anyone else Gabe invites to important venue.

One Response to The Gadfly with Gabriel Malek (podcast)