Trump celebrates labor day. Many who actually labor cringe at his repulsive words and actions. There are far instances too many to mention. Below are a few that are top of mind.

Military Service is For Suckers

Trump celebrates labor day by dissing those in our military services. There can be reasonable differences regarding which of America’s military actions were worthy. However, those who gave their labor and their lives in service of America are not ‘losers’ or ‘suckers.’

Some revelations in The Atlantic are not surprizing. We heard Trump in 2015. John McCain is “not a war hero.”  “I like people who weren’t captured,” he said. Former President George H. W. Bush was a “loser,” because he was shot down by the Japanese in World War II.

The revelation of Trump’s equivalency was over the top. His efforts to avoid contracting sexually transmitted diseases constituted his “personal Vietnam.” And this from Jeffrey Goldberg:

The president believes that nothing is worth doing without the promise of monetary payback, and that talented people who don’t pursue riches are “losers.” (According to eyewitnesses, after a White House briefing given by the then-chairman of the Joint Chiefs of Staff, General Joe Dunford, Trump turned to aides and said, “That guy is smart. Why did he join the military?”)

“Trump asked his staff not to include wounded veterans, on grounds that spectators would feel uncomfortable in the presence of amputees. ‘Nobody wants to see that.'”

Forbes, “the capitalist tool, noted, “for the first time in American history, the 400 wealthiest people paid a lower tax rate than any other group.”

It’s never been more clear that our country’s tax code is built to serve only those who have the most money. While hedge fund managers, private equity executives, and venture capitalists benefit from the carried interest tax loophole, everyday Americans barely get a deduction for their student loan interest payments. Why not offer a credit for first-time homebuyers? This would be more progressive, helping those who are hurting…

The Tax Cuts and Jobs Act of 2017 was the largest tax overhaul in over three decades. It is working exactly as intended, lining the pockets of the wealthy, at the expense of workers.

Hale notes, the proposed rules make no mention of climate change. Any such mention would undermine the logic that considering ESG factors is in the best interest of investors. But the Trump administration denies the very existence of climate change. 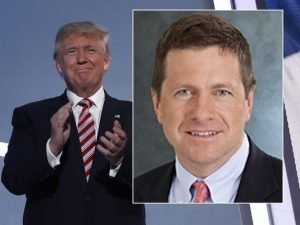 Like Scalia, Wheeler, DeVoss, and Barr, Clayton claims to be fighting for the little guy… “Mr. and Mrs. 401k” and “Main Street” investors. Better Markets listed just a few of his sins to those who labor. I discuss far less below.

When moving the SEC’s proposed rule to disenfranchise the right of investors to file shareholder proposals, he noted,

It is clear to me that a system in which five individuals accounted for 78% of all the proposals submitted by individual shareholders would benefit from greater alignment of interest between the proposing shareholders and the other shareholders—who hold more than 99% of the shares.

Those proposed rules will likely be adopted on September 16, 2020. To deter 5 gadflies from filing shareholder proposals, the SEC will cut out 75% of investors. They hold insufficient shares to submit any proposals. That is the finding of the SEC’s own Chief Economist. He filed data analysis in the form of comments long after the public comment period had closed. CII, ICCR, SIF, CERES, PRI, and the Shareholder Rights Group requests the Commission

carefully reflect on the economic harm that would ensue from the proposed amendments and to set them aside. Short of that, we now urge that the Commission at least provide the impact analysis that is required by the Staff Guidance on Economic Analysis and afford a meaningful opportunity for public comment on that analysis.

My own research found Chairman Clayton’s original assumption to be false. Gadfly proposals do not run counter to the interests of most shareholders  My wife and I represent two of the five shareholders referenced by Clayton. During the Spring 2020 season, most of our proposals won (26 out of 50). They averaged a 59.5% vote FOR.

The median vote was 51.4% FOR. Every proposal to declassify boards (move to the annual election of all directors) won by a wide margin. Every proposal to allow directors to be removed without cause also passed. Shareholders apparently want accountable directors and do not believe directors must be criminals to be subject to removal.

Many corporate boards agreed with us. Boards adopted 38% of our proposals or placed their own version on the proxy, winning high support. If the SEC’s proposed rule had been in effect, we would have had to wait an extra year or two to submit 14 out of 50 proposals. Ten of those proposals were either implemented outright by boards or won high votes. Investors would have had to wait up to two years to receive the benefit of those shareholder enhancing reforms.

Even though Clayton targeted the three of us, his actions will disenfranchise 75% of investors, as stated by SEC’s own Chief Economist. Less than 14% of Americans own any stock directly. Less than 3% of American families hold stock from more than ten issuers. The wealthiest 1% of households own 40% of the corporate stock. The top 10% own 84%.

Clayton’s public statements and the letters he read in support of the proposed rules emphasized his desire to protect Main Street investors. But the letters were faked. A small group of Americans owns the vast majority of stock. Many of those who do own large amounts of stock are CEOs, directors, and others happy with the status quo. Therefore, it is not surprising that only a few people file most of the proposals.

To address wealth inequality and to legitimate our economic system, America should be broadening ownership and engagement. Instead, Trump’s SEC is moving in the opposite direction.

ISS has reactivated its lawsuit against the SEC’s proxy advisor rule adopted in July, as reported by Global Proxy Watch. The company argues that redefining proxy advice as a solicitation for an AGM vote allows issuer lawsuits challenging both facts and opinion, even on custom voting policies drawn up by ISS’s investor clients. ISS agreed to suspend the lawsuit in January, pending adoption of the rule. For more, see ANALYSIS: Divided SEC Passes Controversial Proxy Advisor Rule.

Climate change, easily the biggest material ESG risk for many companies, especially the fossil-fuel companies that Trump administration policies like these are trying to protect, doesn’t merit a single mention in the 61-page document…

If either Commissioner Roisman or the DOL were serious about understanding the question of ESG materiality they might have consulted the Sustainable Accounting Standards Board (SASB) Materiality Map, which identifies 26 sustainability issue areas that are likely to affect the financial condition or operating performance of companies on an industry-by-industry basis. Or they might have discussed the findings of Khan, Serafeim and Yoon (2016) that companies that address material ESG issues most effectively tend to outperform financially and as investments…

Neither the DOL nor the SEC has come to grips with what ESG investing is about today. At the most fundamental level, it’s about basing investment decisions on a more holistic view of a company made possible by the wide availability of ESG data, rather than limiting investment analysis to traditional financial accounting factors. This helps investors understand how sustainable a firm’s long-term business model is, how it treats all its stakeholders, and provides an early warning on environmental and social risks before they affect company value…

they are political ideologues who see this in political terms and are using concepts like fiduciary duty to try to keep investors from quite reasonably and responsibly considering material issues like climate risk in investment analyis.

This is why we have elections.