With their massive amounts of money under management, these firms are often among the largest shareholders at many of the world’s biggest companies. …

[F]or the first time in the history of Morningstar’s proxy vote data base, State Street Global Investors and Fidelity … supported a majority of the climate-related disclosure requests that shareholders placed on the ballot.

The overall number of proposals going to a vote is down because companies are more willing to negotiate. However, another factor is that the “SEC now routinely sides with corporate management when asked for permission to leave resolutions off the ballot …” 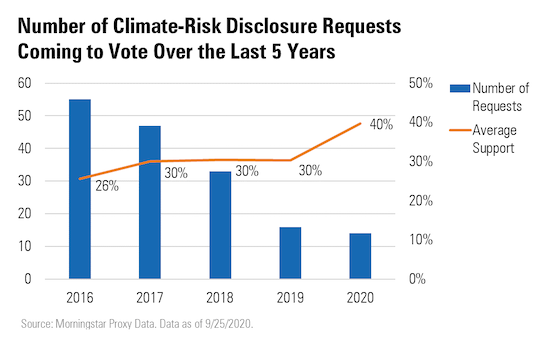 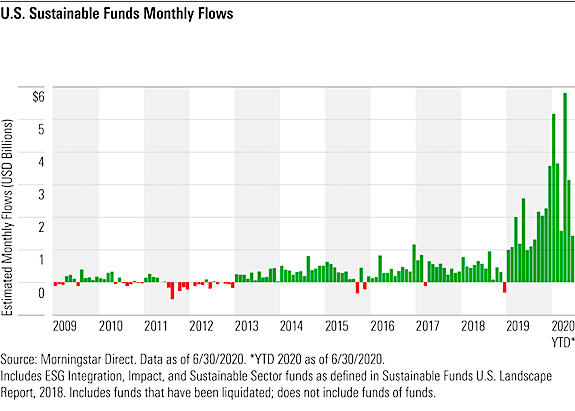 Jackie Cook notes most of the largest funds have offerings with ESG mandates. “We dug deeper into the votes on ESG funds to see if they aligned with the principles that investors might expect around climate change.”

Climate Action 100+ is an investor initiative to ensure the world’s largest corporate greenhouse gas emitters take necessary action on climate change. Why join if you do not support the organization’s actions? Cook notes:

Of the 12 climate-linked resolutions flagged by CA100+, BlackRock, which joined the $42 trillion coalition in January, opposed all but two. Fidelity and Vanguard opposed every one of the resolutions.

My petition to the SEC could generate competition by funds around ensuring proxy votes align with investor values. (Rulemaking Petition for Real-Time Disclosure of Proxy Votes, SEC File 4-748, Jul. 9, 2019) Under a Biden administration, we can make real progress. Otherwise, expect more floods, fires, and destruction as the money we invest is voted against our own values.

Silence on climate policy is not neutrality; it effectively endorses the anti-climate advocacy agenda of powerful industry groups. The business case for climate policy is clear, and the time for companies to make their voices heard is now.

They find the vast majority of companies remain silent on climate issues. Companies are reluctant to oppose popular climate policies. Instead, they pay trade associations, like the US Chamber of Commerce, to do their dirty work.

For example, the U.S. Chamber of Commerce commended the Department of Labor’s proposed amendment to ERISA. That will force many retirement plans to base investment decisions only on traditional accounting. There is widespread agreement that strong ESG correlates with strong financial performance. ESG metrics are essential to financial decision making.

In a world where stakeholder capitalism is both an expectation and urgent need, the Chamber’s position on ESG funds is outdated and untenable. It’s also baffling, given the increasing importance of ESG metrics to both investors and companies.