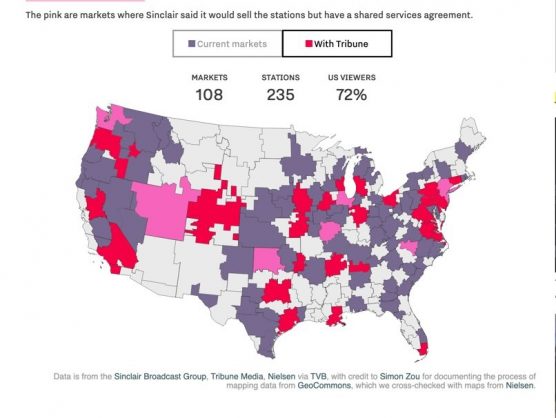 Conservative TV and Corporate Social Responsibility. Again, public opinion is the driver. A 2017 Pew Research Center study found that 37% of Americans get their news from local television news. Only 28% get their news from cable TV, while 26% tune into network news. Sinclair Broadcasting expands by acquiring those trusted local TV stations and feeds them national content with a conservative slant. It now reaches 39% of households.

Unfortunately, that conservative spin has costs to the environment, social fabric, and shareholder return. Mahsa Kaviani, Lily Li, and Hosein Maleki have written a research paper worthy of attention, especially during this critical election year. The situation would have been much more dramatic if Sinclair had successfully acquired Tribune (red areas in the map above).

We study the impact of exposure to conservative media on firms’ CSR activities using the quasi-natural expansion of Sinclair Broadcast Group: the largest conservative broadcasting network in the U.S. local TV markets. In a difference-in-differences setting, we find that firms significantly reduce CSR activities after exposure to Sinclair TV in all three dimensions: environmental, social, and governance.

Consistent with ideology as a driver of our results, the effect is stronger when there is more propensity for the audience to accept Sinclair messaging: for example, for firms belonging to gun, tobacco and gambling industries, when Sinclair acquires more Fox-affiliated TV stations, and for those headquartered in Republican-leaning counties. Cross-sectional evidence also suggests stronger effects associated with lower institutional ownership, higher litigation risk, younger CEOs, or a higher percentage of female executives. Related, we find no impact of Sinclair exposure on firms’ accounting performance measured by ROA, but a negative impact on their Tobin’s Q and stock returns.

As background, the authors cite other studies finding that:

The authors estimate the change in CSR ratings of firms before and after Sinclair entry into the TV markets of firm headquarters. After three years, overall post-Sinclair CSR scores are significantly lower than the pre-Sinclair CSR, as are the scores in three sub-categories: social, environmental, and governance. Methodology and examination of possible alternative explanations appear fairly solid.

“Due to the conservative nature of Sinclair, a firm can opt to lower its CSR activities upon its influence from ideology shift.” Even national corporations are influenced by public opinion in their HQ city. Firms might reduce CSR simply because their deeds do not get as much local news coverage as before Sinclair media market. They found “CSR scores decrease even more when the firm belongs to sin industries, when Sinclair acquires more Fox-affiliated stations, and when the county votes more than 50% for a Republican candidate in the latest presidential vote.” Firms with lower institutional ownership are more susceptible to Sinclair’s influence. The authors theorize that difference may be to litigation risk. Since retail shareholders usually do not vote their proxies, lack of monitoring by owners would also be a contributory factor.

Lower CSR associated with Sinclair moving into the area jeopardizes long-term shareholder value. On average, the raw stock return is 7.8% lower annually with Sinclair exposure, 4.4% lower when adjusted by risk. Bottom line: “There is a negative but statistically insignificant relation between Sinclair exposure and ROA, and negative and significant relation between Sinclair and Tobin’s Q as well as stock returns.”