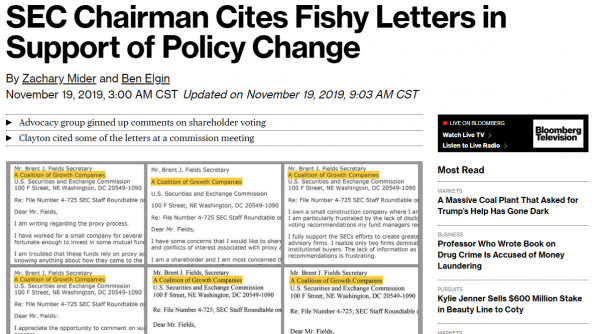 Faking It. Remember those allegedly fake letters from retail investors supporting the US SEC’s controversial proxy advisor rule? [And the rules to “modernize” shareholder proposals, SEC Trampled Shareholder Rights.] Global Proxy Watch [GPW] remembers. They published the following yesterday [reproduced below with a little reformatting and my two cents in brackets]:

On September 25 the Commission’s Office of Inspector General (OIG) posted the results of a probe into the matter. But the opaque one-pager reads more like a white-wash than the neutral examination of potential misconduct required of the Inspector (GPW XXIV-27).

It says the OIG could not verify last year’s Bloomberg article quoting individuals who said they never wrote the letters submitted in their name by a corporate-funded conservative advocacy group. However, the summary did not say whether the OIG spoke to any of those named such as Pauline Yee or if they had denied what they told Bloomberg.

The report did confirm that an advocacy group and a PR firm solicited letters. However, it did not name them or assess their link to issuers, the reason their role was controversial in the first place. [The Main Street Investors Coalition mysteriously disappeared from the Internet.]

Faking It: the Evidence

More fundamentally, the summary does not address the central issue.  Did SEC chair Jay Clayton and his two GOP colleagues have any other evidence that the rule would benefit Main Street investors? The three repeatedly made this claim over investor objections—even after the letters were questioned, including when the three passed the rule eight months later (GPW XXIV-30).

On September 18 ISS filed an amended lawsuit and motion calling for the rule to be dismissed for unlawfully designating proxy advice as proxy solicitation (GPW XXIV-32).

[GPW edited by Stephen Davis and Aaron Bernstein offers an enormous amount of insider news and perspectives into 46 two-page issues a year. Subscribe.]