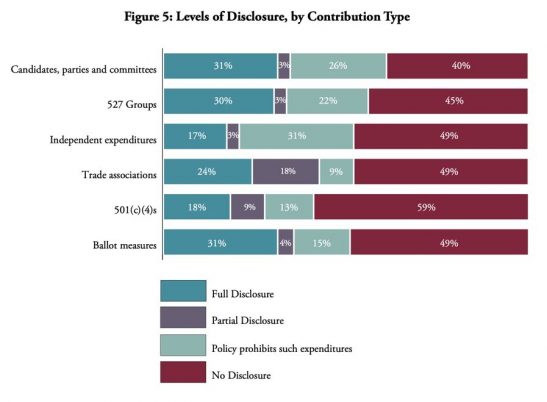 Political disclosure up at large publicly held U.S. companies. That’s the conclusion of The Center for Political Accountability (CPA) and The Wharton School’s Zicklin Center for Business Ethics Research.  Adoption of sound transparency and oversight practices for their political spending is part of an accelerating trend,  according to a new scorecard. Investors want to hold their companies accountable.

CPA and the  Zicklin Center released the annual CPA-Zicklin Index and the 2020 Model Code of Conduct for Corporate Political Spending.

The Index rates S&P 500 companies for their political disclosure and accountability and includes these major findings:

The original Model Code of Conduct was issued in 2007. It was updated with input from public companies and directors, socially responsible investors, and academics. The updating roundtable at Wharton took into account three major developments.

The Model Code will be sent to all S&P 500 companies.

The “Trump years (2016-2020) have proven to be a boom time for corporate political disclosure and accountability,” the report’s authors write in its executive summary. My two cents:  The rulebreaker in the White House focuses our need to know where the money is flowing.

Writes Professor Rebecca Henderson of Harvard in the foreword:

The annual scorecard potentially catalyzes a race to the top, driving increased disclosure and accountability across the entire universe of publicly traded firms.

In today’s hyperpolarized political environment, companies face serious risks from what their political spending associates them with. Our Index shows real progress in companies acting to manage this heightened risk.

These benchmarks now have well-established standards in the long-standing CPA- Zicklin Index, offered this year with the guidance of a Model Code. Leadership in some of the largest and most powerful companies in the world are increasingly embracing disclosure practices that reflect a new level of transparency.

Michael E. Porter, a Harvard Business School professor and director of the school’s Institute for Strategy and Competitiveness, said:

I urge businesses to adhere to the principles outlined in the Model Code and to support healthy political competition that will improve the overall business environment and advance the public interest. (Read his entire statement.)

From the Preamble to the CPA-Wharton Zicklin Model Code

The model code is intended as a guide for companies that seek to:

Companies at the top of the Index, Earning Trendsetter Status

Others With Trendsetter Status

There are 163 companies from the S&P 500 residing in the bottom tier (with scores of zero to 20 percent), down from 194 in 2016. A number of them are large or well known and have consistently scored in the bottom tier since 2016. These include:

Disclosure is just the first step. As Justice Kennedy wrote in Citizens United:

With the advent of the Internet, prompt disclosure of expenditures can provide shareholders and citizens with the information needed to hold corporations and elected officials accountable for their positions and supporters. Shareholders can determine whether their corporation’s political speech advances the corporation’s interests in making profits, and citizens can see whether elected officials are ‘in the pocket’ of so-called moneyed interests.

While I frequently see social media campaigns, such as UltraViolet’s aimed at consumers calling out companies for their political contributions, such campaigns by shareholders are rare.