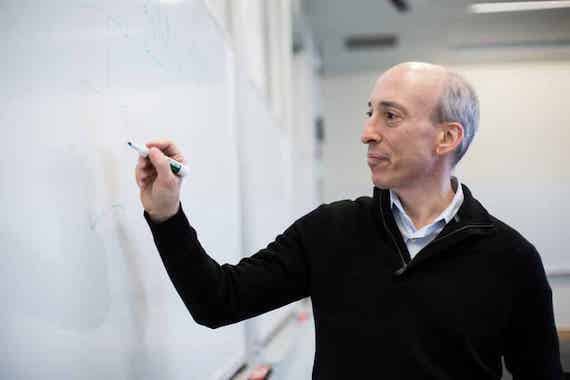 Gary Gensler, a former financial regulator, and Goldman Sachs banker, now at MIT, is rumored Biden’s choice to head the SEC. As head of the Commodity Futures Trading Commission (CFTC), he helped uncover interest-rate rigging on Libor, which underpins $300T in loans. Banks had to cough up $9B in fines. He pushed for transparency around derivative trading and sided with the public over Wall Street, according to the New York Times.

Nearly 20 years at Goldman gave him an insider’s perspective on the financial industry. Gary Gensler’s experience at the CFTC leads me to believe he will use that knowledge to advance the cause of Main Street investors. Prediction and advice follow. See also

Expect environmental disclosure rules to, at a minimum, move toward standardized reporting with respect to climate risk. Harmonizing reporting will be difficult and subject to change but the need is great. (See SEC Commissioner Considers Future ESG Investment Regulation.)

Shareholder proposals by my wife (Myra K. Young) and I (James McRitchie), with help from The Shareholder Commons, exemplify the beginnings of such an approach.

Gary Gensler’s social policies will focus on diversity and inclusion. (Political and lobbying disclosure will be taken up after Congress lifts its budget rider prohibiting SEC rulemaking, with renewed vigor after Capitol invasion.) Initial diversity and inclusion focus will center on women and minorities. See Diversity Matters, Disclosure Works, and the SEC Can Do More.

Focus under Gary Gensler could gradually expand to include mechanisms to further integrate employees more formally into corporate governance. Like the inclusion of women and minorities, inclusion and empowerment of workers would increase productivity and reduce alienation.  Income/wealth inequality of workers could also be addressed more broadly.

Review how Congressional proposals could impact the issues. Review current director independence definitions and other keystone concepts to ensure our regulatory framework can accommodate corporate governance frameworks that empower workers.

Shareholder proposals by my wife (Myra K. Young) and I (James McRitchie) offer a wide framework for companies and the Commission to consider.

Proxy Plumbing will finally get addressed under an SEC led by Gary Gensler. See the Recommendation of the SEC Investor Advisory Committee (IAC) Proxy Plumbing. Blockchain is key and Gensler taught a course on it at MIT.

Anti-shareholder regulations adopted at the behest of astroturf lobbyists in the name of “Main Street Investors” are likely to be repealed through the Congressional Review Act. That would be quicker than the SEC doing so on a piecemeal basis.

To build a lasting legacy and allow our economic financing system to better address the many issues our economic system faces, Gary Gensler could empower Main Street investors. Provide the information needed and remove systems roadblocks so that individuals can become engaged participants.

Employers provide information on funds available to their employees through 401(k) and other investment plans. That information focuses on historical returns and fees. The most common investment choices in most plans are usually index funds, which now have more assets than actively managed funds. Returns and costs for indexed funds are very similar for funds modeling the same index. See, for example, a typical article comparing S&P 500 funds.

What neither employers nor most investment advisors provide is any information on fund voting records. That information must be extracted by a combination of computers using artificial intelligence and sheer manual labor. Form N-PX,  the form funds use to report their votes, does not require reporting in a standardized format that can be easily tabulated and compared. A Gary Gensler led SEC requiring that one small change would lead to an abundance of articles such as Proxy Voting Adds Some Spice to Plain-Vanilla Index Investing.

Comparable proxy voting records would begin to drive choices, since the differences in voting by funds is much starker than for earnings or fees, especially for popular index funds. Widespread reporting of fund votes will result in much more debate about how funds should vote. Eventually, fund families will tailor individual fund voting based on portfolio objectives. ESG funds will vote differently within the same fund family than funds that ignore such information. Customers would sort themselves, patronizing many funds based on how the investor’s own values align with fund voting records. If funds cost the same and earn the same, how they vote will be a significant source of branding. Aligning with investor values and evidencing a record of engagement will drive competition.

Further Information. See Proxy Scorecard and Fund Competition, which called on the SEC to not only require that funds report their votes in machine-readable format but do so in real-time. Last year’s news is irrelevant to most people, so real-time disclosure was thought to be an important requirement. However, many funds oppose real-time reporting. They fear being inundated by companies and even individuals requesting them to change their votes. It now appears a substantial number of funds with trillions of dollars invested will announce votes in advance of meetings without making that a requirement.

Investor.gov, under the guidance of Gary Gensler, could do much more to educate investors about shareholder rights and responsibilities. Look up Shareholder Voting on Investor.gov. The latest entry is What is new in 2012? The world has not stood still since 2012. Investor.gov under Gary Gensler should be updated and expanded to include, for example:

The importance of taking an active role in corporate governance.

Importantly, Investor.gov could list and provide links to funds that announce their votes in advance of annual shareholder meetings. Reviewing how others voted and why can be very helpful in determining our own vote. Over time we learn which funds are most aligned with our own values, so we copy their votes if we doubt our own analysis. I include a list of such funds in our CorpGov.net Handbook.

There is no such thing to my mind . . . as an innocent stockholder. He may be innocent in fact, but socially he cannot be held innocent. He accepts the benefits of the system. It is his business and his obligation to see that those who represent him carry out a policy which is consistent with the public welfare. – Justice Louis Brandeis

In Citizens United, which opened the floodgates to corporate political spending, Justice Kennedy wrote the following:

With the advent of the Internet, prompt disclosure of expenditures can provide shareholders and citizens with the information needed to hold corporations and elected officials accountable for their positions and supporters.

Shareholders could use the “procedures of corporate democracy” to ensure their “corporation’s political speech advances the corporation’s interest in making profits.”

Just as investors do not know how their funds vote, they also do not know how the companies in their portfolios spend money for lobbying or campaign contributions. Once Congress removes budget rider language, the SEC can require disclosure. Yet, a serious problem will remain. The vast majority of individual shareholders do not vote their proxies. Doing so is too time-consuming and too difficult to make the effort worthwhile.

Institutional investors can hold millions of shares at an individual company. They do not read through the hundreds or thousands of proxies they vote. Instead, they vote using proxy voting policies. Staff review is limited to items that have not been anticipated by their voting policies.

The SEC under Gary Gensler could encourage automated “client directed voting” by facilitating the development of internet voting platforms and proxy voting policy defaults like institutional investors use. Shareholders should be free to have their proxies distributed to and voted by an agent of their own choosing. CDV systems should be financially incentivized with a portion of funds distributed to encourage movement from paper delivery. Reference the following: