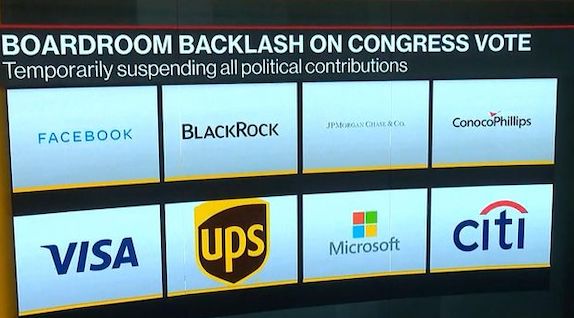 Halt Corporate Political Spending. That is the recommendation of the Interfaith Center on Corporate Responsibility (ICCR), a coalition of investors representing over $US 2 trillion in assets under management. ICCR released a statement to the CEO members of the Business Roundtable (BRT) urging them to refrain from political spending. Take a six-month break and assess inherent risks. That would be good corporate governance.

I (James McRitchie) filed proposals for the 2021 proxy season asking the following to disclose all their political spending:

However, Companies donated $170M to GOP election objectors seeking to overturn certified elections. Some are now halting corporate political spending on those who supported the deadly insurrection by Trump supporters.

ICCR investors urged corporations to use the hiatus to consider implementing more permanent steps to end all political spending. That would include direct donations to politicians, Political Action Committees (PACS), Super PACs, 527 committees or anonymously through trade associations and “social welfare” organizations (also known as 501(c)(4) groups). The statement was sent to CEO members of the BRT and is being circulated to investors for endorsement. I certainly signed on myself.

We seek due diligence by companies around the inherent risks of political spending not only to businesses but to the broader political system and the public interest. According to the statement:

“The distortion of public policy and corrupting influence on our political system caused by corporate political spending has a destabilizing effect on the broader economic and cultural environment, inhibiting the long-term sustainability of business and threatening to unravel the social fabric.”

While companies may perceive a short-term gain from funneling money to elected officials, the reputational risk they face and, more critically, the corrosive effect on democracy of corporate money in politics should give them pause.  January 6th should have sounded the alarm: it is vitally important for companies to carefully evaluate the problematic impacts of their political spending.

The investors say these suspensions and reviews are good first steps, but bolder action is needed. Tim Smith of Boston Trust Walden released the following statement:

Many corporations are urgently evaluating appropriate options for their companies related to political spending, a welcome and important step; this is a timely moment for an in-depth board review of these practices.  Investors have long raised the issue of reputational risk for companies from controversial lobbying and political spending related to elections.

Said Bruce Freed of the Center for Political Accountability

This could be an epiphany moment for companies. The level of risk they face from political spending has grown exponentially. New policies, including a code of conduct for political spending, are required to guide their decision-making and risk-evaluation as they consider how their spending impacts their companies, society and our democracy.

ICCR members and other investors have long pressed companies for transparency. It is important to ensure accountability and consistency with public messaging.

And the Court expressed enthusiasm that technology today makes disclosure “rapid and informative.”

Yet, corporations are not required to make the disclosures to shareowners as Justice Kennedy believed. How can we, as shareowners or citizens, hold corporate managers accountable when we do not know what candidates or measures they are supporting?

The Myth of Bipartisan Giving

A soon to be published analysis of 2020 election cycle spending by the Fortune 250 from the Sustainable Investments Institute (Si2) found particularly partisan company-connected political spending. That runs counter to the popular narrative of bipartisan giving.  Just seven companies gave more than $7 million to two Super PACs that overwhelmingly funded attacks on Democratic candidates for the U.S. House and Senate.  The vast majority of corporate-connected political contributions went to Republicans in the South (79% of state candidates and 69% of state party giving) and Midwest (64%).

Halt corporate political spending, at least on a temporary basis could be critical to democracy. After assessing the risks such contributions make to profits and our democracy, some may choose to halt all such spending. All should support repealing budget rider language, which for years has prohibited the SEC from requiring disclosure.

Celebrating its 50th year, ICCR is the pioneer coalition of shareholder advocates who view the management of their investments as a catalyst for social change. Its 300-member organizations comprise faith communities, socially responsible asset managers, unions, pensions, NGOs and other socially responsible investors with combined assets of over $2 trillion. ICCR members engage hundreds of corporations annually in an effort to foster greater corporate accountability. Follow ICCR on Twitter, LinkedIn, and Facebook.