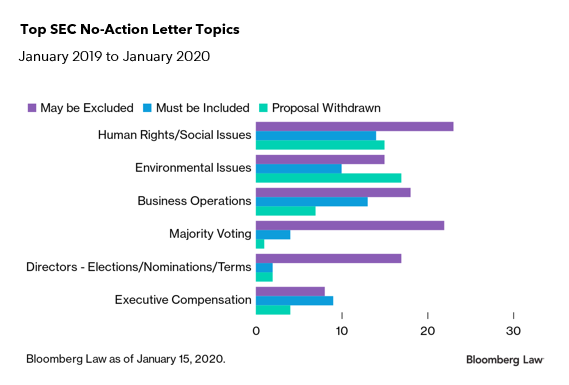 Reform no-action process. That was the call of a recent letter by the Shareholder Rights Group to John Coates in his new role as Acting Director of the SEC’s Division of Corporation Finance. The letter is posted below. Some formatting changes were made and I added links to put our request to reform no-action process in context.

Re:    Investor Protection and Rule 14a-8 No Action Process

Congratulations on your appointment as Acting Director of the Division of Corporation Finance. We look forward to engaging together on a variety of critical issues before the Division.

As you may know, a group of investment organizations recently wrote to Acting Commission Chair Allison Herren Lee regarding climate change and the no-action letter process. Now that this issue will be on your desk, I am writing to express the interests and concerns of members of the Shareholder Rights Group. When your schedule permits, would welcome the opportunity to set up a call with investor leaders to discuss further.

The last four years saw the Corporation Finance leadership undertake significant doctrinal experimentation in the Rule 14a-8 program, implemented through a series of Staff Legal Bulletins and no-action rulings. We acknowledge the dutiful and diligent work of the Staff in developing and implementing regulatory innovations; yet in the wake of this prolific experimentation, we strongly recommend that the Division now take careful stock of the various experiments and reverse problematic initiatives.

Among these novel doctrinal and procedural devices were:

(a) a new definition of ‘micromanagement’,
(b) a new approach to ‘substantial implementation’,
(c) a request for opinions from boards of directors,
(d) a decision to not issue written rulings on each no-action request,
(e) a new approach to ‘relevance’, and
(f) a new way to exclude proposals based on the concept of a ‘delta’ between the proposal and prior company actions.

We questioned the viability of these so-called innovations at the time, and now have had enough time to work under them to be able to conclusively state that they interfere with the ability of shareholders to engage in active stewardship through the shareholder proposal process.

As discussed further below, the micromanagement and substantial implementation changes have dramatically restricted the ability of shareholders to file proposals that encourage companies to improve their performance on Environmental, Social, and Governance (ESG) matters.

In addition, the “significance to the company”, or ‘delta’ from company actions is redundant and overlaps with Relevance (Rule 14a-8(i)(5)) and with Substantial Implementation (Rule 14a-8(i)(10)). This has complicated the process of filing and defending shareholder proposals. The change blurs the lines between the various exclusions and gives issuers and their boards an entirely new way to exclude proposals that was never envisioned within the Rule itself.

The decision to not issue written rulings on each no-action request has been problematic in the extreme, because it fails to provide guidance or establish a framework for accountability. While we congratulate the Staff on the recent reorganization of the program’s online presence (such as the homepage and organizing the chart into a database format), we see a compelling need for clear guidelines as to when Staff will issue a written opinion and rationale. We suggest that any time a no-action request is rebutted by a proponent, Commission Staff should render a written decision. This should also apply to other rulings where the rationale may not be self-evident.

While new ideas imposed by the prior administration may have been thought by some to be interesting experiments, we believe they have conclusively failed to provide benefit due to the costs and uncertainties they impose. Now that these concepts have been thoroughly tested, it is apparent that the doctrinal changes amount to APA rulemakings without notice and comment, and therefore can and should be withdrawn.

Accompanying this letter is a chart which illustrates some of the damaging doctrinal impacts reflected in Staff no-action decisions. The chart focuses principally on proposals that relate to climate change, though the doctrinal deviations – such as whether a proposal can request that a company set targets – apply to other issues as well. In addition, we note that the list cannot convey the full impact of these rulings, which have thwarted appropriate proposals from being filed, and have contorted the drafting of proposals into a form that necessitates less clarity of the proponent’s request.

The Division has gone through a number of iterations of micromanagement over the last four years, developing ever more restrictive doctrines until arriving at the idea that any proposal which requests an outcome (e.g., create a board committee on climate change or set greenhouse gas targets) may be treated as micromanagement. This is a serious impediment to shareholders in advancing climate change proposals. There is strong sentiment in the investment community that portfolio companies should set performance targets such as net zero GHGs on a timeline consistent with global climate goals. Yet, the Staff’s approach of recent years impedes proposals that request such actions.

In his 2021 letter to shareholders, BlackRock CEO Larry Fink identified the climate crisis as an existential threat. Fink wrote: “net zero demands a transformation of the entire economy” and he pledged to ask that portfolio companies: “disclose a plan for how their business model will be compatible with a net zero economy.” This request is entirely in keeping with the requests made by other shareholders who seek net zero targets or plans for 2050, yet the SEC rulings of recent years block such proposals.

The earlier understanding of micromanagement (prior to the previous administration) allowed exclusion of a proposal that asked a company to address minutia, such as low-flow shower heads or the adoption of a long list of technical standards for emissions. We understand such a commonsense form of micromanagement. The ‘new micromanagement’, in contrast, prevents shareholders from even suggesting new policy directions or performance improvement strategies for companies. This erroneous interpretation should be revoked.

Recent precedents on substantial implementation such as Exxon Mobil Corporation (March 20, 2020), Hess Corporation(April 11, 2019), Exxon Mobil Corporation (April 3, 2019) deviated from staff practice in that they ignored the evident purpose of the proposal as intended by the proponent, and instead defined a very limited “essential purpose” as defined by the registrants. For instance, proposals that asked companies to discuss “if and how” the company would align with the Paris Agreement’s temperature goals were designed to elicit a ‘yes or no’ response as to whether or not the company will align with Paris. This is an essential, material, benchmark of concern for ESG and SRI investors. But the Staff responses embraced such a broad view of essential purpose that they allowed voluminous but unresponsive reporting to suffice as substantial implementation.

Whether one interprets this shortcoming as a failure to meet the guidelines of the proposal, or failure to address the essential purpose, it is evident that the determination to allow exclusion of such proposals and to deny shareholders the opportunity to vote on these issues is both unnecessary and ill-advised.

In the midst of everything that faces the new Administration and your tenure as Acting Director of Corporation Finance, we view the issues described above as addressing legal and administrative infrastructure in support of the SEC’s core investor protection mission, and relevant to all of the important work that lies before the Division.

We would welcome the opportunity to discuss these matters further, we pledge our support for the Administration’s agenda of “building back better”, and we look forward to working with you to achieve a more vibrant, fair, and sustainable economy for all.