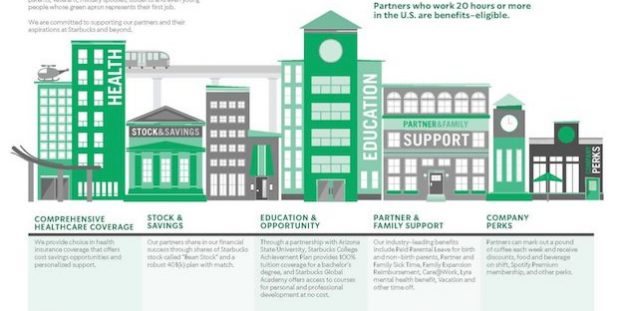 Proposal #4 aims at increasing diversity by adding a worker to the pool of candidates to be considered for the Board. The idea is to increase the voice of “partners.” We’ve been listening and seeing how important partners are to Starbucks.

Instead of considering hundreds of thousands of partners for a possible seat at the table, the Board responded, “our partners have numerous ways to be heard and exert influence outside of board representation.” Partners can access an

The Board says, “Giving non-management employees a dedicated position on the board … or applying a different set of qualifications would adversely impact the role of the board.” (my emphasis)

But, the proposal does not ask for a dedicated position for “partners.” It does not ask for a different set of qualifications in selecting Board members. It only seeks to have employees considered in the initial pool. Surely, at least one of our 400,000 partners is worth considering for a seat at the table.

If you’re a “partner” in a firm or a marriage you’re on the same team, right? But our Board refused to consider any significant step to increase the voice of partners.

The Board could have appointed a formal workforce advisory panel or designated a director to be a liaison with workers. They could have set up a substantive employee stock ownership plan (an ESOP), with voting rights held by partners or their elected trustees.

A worker on the Board, a workforce advisory panel or a designated director could institutionalize ongoing dialogue. An ESOP, with trustees elected by employees, could have a real influence on Board composition. Any of these changes would engage and empower partners, leading to a better place to work and a more profitable company for all partners and shareholders.

Instead, our Board refused to negotiate.

This is an advisory proposal that is much more flexible than federal legislation being considered, which could impose workers on our Board. I’m interested in hearing from other shareholders – and especially from partners. Email me at jm@corpgov.net. And please vote FOR proposal #4. Let the Board know giving partners a more voice is important to you. Thanks.

I clicked to vote a minute after concluding my proposal. The polls had already closed. What is the point of formally presenting a proposal at a meeting if the polls close so quickly that no one can consider the presentation before voting?