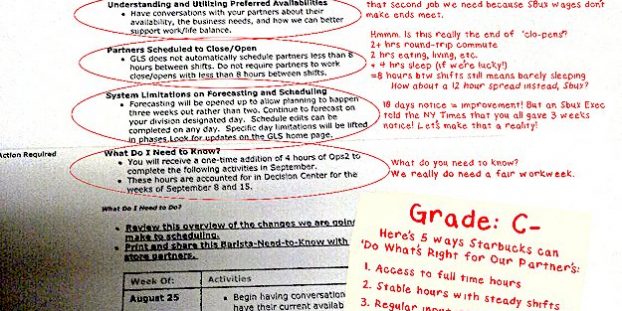 Starbucks Corporation, together with its subsidiaries, operates as a roaster, marketer, and retailer of specialty coffee worldwide. Most shareholders do not vote.  Reading through 80+ pages of the proxy takes time but your vote could be crucial. Below, how I voted and why.

I voted with the Board’s recommendations % of the time. View Proxy Statement via SEC’s EDGAR system (look for DEF 14A).

From the Yahoo Finance profile: Starbucks Corporation’s ISS Governance QualityScore as of December 3, 2020 is 8. The pillar scores are Audit: 8; Board: 1; Shareholder Rights: 8; Compensation: 9.

Egan-Jones Proxy Services recommends against Joshua Cooper Ramo. Directors who served for much longer than 10 years are not independent. Since I voted Against Pay (#2 below), I also voted against all members of the Compensation Committee, since they recommended the Pay. They include Richard E. Allison, Jr., Mary N. Dillon, Satya Nadella, Clara Shih, and Javier G. Teruel.

Starbucks’ Summary Compensation Table shows the highest paid named executive officer (NEO) was CEO Kevin Johnson at $14.7M. I’m using Yahoo! Finance to determine market cap ($124B). I define large-cap as $10B, mid-cap as $2-10B, and small-cap as less than $2B. Starbucks is certainly a large-cap company.

According to MyLogIQ, the median CEO compensation at large-cap corporations was $13M in 2020. CEO Kevin Johnson is at $14.7M, so higher. Starbucks’ shares have underperformed the S&P 500 over the most recent one-, two-, and five-year time periods.

Mr. Johnson was ranked the 43rd most overpaid CEO in a recent study. Given my concern for the growing wealth disparity, sustained underperformance and a very hight pay ratio, I voted Against.

I have no reason to believe the auditor engaged in poor accounting practices or has a conflict of interest. Egan-Jones recommends voting against the auditor if they served for seven years. Independence becomes compromised by that time.  Deloitte & Touche, LLP served more than seven years. No other issues appear significant

This proposal from me (James McRitchie), so, of course, I voted FOR. Egan-Jones thinks “the proposal is unnecessary and will not enhance shareholder value.”

The Proposal clearly argues the following in support:

Starbucks opposes because “our partners have numerous ways to be heard and exert influence outside of board representation.” Mentioned are the following:

“Giving non-management employees a dedicated position on the board … or applying a different set of qualifications would adversely impact the role of the board in this process.  Of course, my proposal does not ask for a dedicated position on the board for employees (“partners” in Starbucks speak). It does not ask Starbucks to apply a different set of qualifications in selecting members. It only seeks to have employees considered in the initial pool.

My proposal was an opening move. I would have withdrawn it if the Board had agreed to any significant step to increase workers’ voice.

For example, the Board could have appointed a formal workforce advisory panel or designated a director to liaise with workers. They could have set up a substantive employee stock ownership plan (an ESOP), with voting rights held by employees or elected trustees.

A worker on the Board, a workforce advisory panel or a designated director could institutionalize ongoing dialogue. An ESOP, with trustees elected by employees, could have a real influence on Board composition. Any of these changes would engage and empower workers, leading to a better place to work and a more profitable company for shareholders.

Instead, our Board refused to negotiate.

This is a new type of proposal, which has yet to be considered by most institutional investors or included in their voting policies. Most will vote with the Board by default. However, as I mentioned, this is only an opening move. I’m interested in hearing from other shareholders – and especially from Starbucks employees. I’ll be back. Email me at jm@corpgov.net.

Pursuant to SEC Rule 14a-8, shareholder proposals intended for inclusion in our 2022 proxy statement … must be received by us at our executive offices at 2401 Utah Avenue South, Mail Stop S-LA1, Seattle, Washington 98134, Attention: Corporate Secretary, on or prior to September 24, 2021.